by Michael C. Mankins and Richard Steele
Marakon Associates
To print this article, all you need is to be registered or login on Mondaq.com.

Everyone knows that great strategy can’t produce great performance without great planning and execution. Yet companies routinely fall short of the financial results spelled out in their strategic plans. In fact, our research suggests that companies typically deliver less than two-thirds of their strategy’s performance potential and, more importantly, that the causes of this "strategy-to-performance gap" are all but invisible to top management. Not surprisingly, then, leaders often pull the wrong levers in their attempts to turn performance around – they press for better execution when what’s really needed is a better strategy, or they opt to change direction when they really need to focus the organization more sharply on execution. The result: wasted energy, lost time and continued underperformance.

As serious as these problems are, a select group of high-performing companies has managed to close the strategy-to-performance gap through improved planning and execution. These companies develop strategic plans that are solidly grounded in the underlying economics of their markets and use these plans to drive performance delivery. They have a set of planning and execution disciplines that make it far less likely they will face a shortfall between actual and planned performance, and if they do, the disciplines enable top management to quickly discern the cause and take corrective action. These practices become widespread and deep-rooted, creating a self-reinforcing culture of overperformance. While the disciplines are broad in scope – ranging from unique forms of planning to integrated processes for deploying and tracking resources – our experience suggests that they can be applied by any business to help craft great plans and turn those plans into great performance.

At most companies, there is a significant disparity between the potential financial performance management believes its strategy can produce and the actual results the company delivers over time. In some cases, this shortfall is due to unrealistic plans – that is, the results embedded in management’s projections simply cannot be achieved no matter how well the team executes. But in other instances, the shortfall stems from breakdowns in execution. Closing this strategy-to-performance gap can be a significant source of performance improvement for most companies. But before action can be taken to narrow the gap, executives must first understand its size and root cause.

In the fall of 2004, Marakon Associates, in collaboration with the Economist Intelligence Unit, surveyed senior executives from 197 large companies worldwide. The goal of this research was to determine just how successful companies are at translating their strategies into performance. Specifically, we wanted to know how effective companies are at meeting the financial projections set forth in their strategic plans. And when shortfalls do arise, what are the most common causes and what actions are most effective in closing the strategy-to-performance gap. The findings were revealing – and troubling.

While the executives we surveyed compete in very different product markets and geographies, they share many concerns about planning and execution. Virtually all of them said they struggle to produce the level of financial performance forecast in their long-range plans. Furthermore, the processes they use to develop plans and monitor results make it difficult to discern whether the strategy-to-performance gap stems from poor planning, poor execution, both or neither. Specifically, we found:

– Few companies routinely track actual performance relative to their plans over extended periods of time. As a result, it is difficult for top managers to know whether the projections that underlie their capital investment and portfolio strategy decisions are in any way predictive of actual performance. Moreover, the fact that actual versus planned performance is seldom monitored helps explain why so many companies seemingly pour good money after bad – continuing to fund losing strategies rather than searching for new and better options. – When companies do track actual performance relative to planned projections over a number of years, what commonly emerges is a picture one of our clients recently described as a series of "diagonal Venetian blinds," where each year’s performance projections, when laid side by side, resemble Venetian blinds hung diagonally (see Figure 1). If things are going reasonably well, then the starting point for each year’s new "blind" may be a bit higher than the prior year’s starting point, but rarely does it match the prior year’s projection. The obvious implication: year after year of underperformance relative to plan. 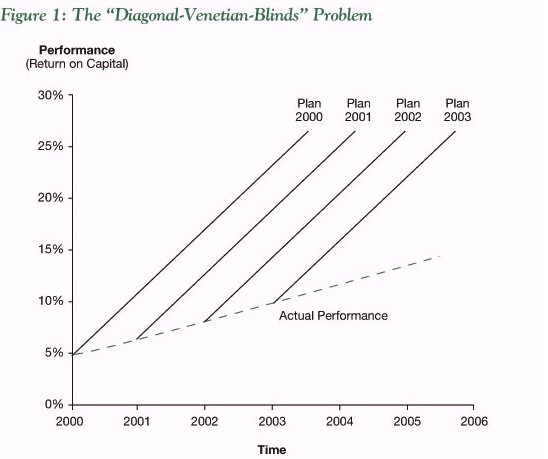 – Given the poor quality of financial forecasts embedded in most strategic plans, it is probably not surprising that most companies fail to realize their strategies’ potential value. In fact, the executives we surveyed indicated that, on average, they deliver only 63% of their strategy’s potential due to breakdowns in planning or execution. And more than a third of those surveyed placed the figure at less than 50%. Put differently, if management were to successfully realize the full potential of its current strategy through more effective planning or execution, the increase in performance would be nearly 60%, on average. As shown in Figure 2, the performance shortfall can be traced to a combination of factors, ranging from poorly formulated plans to misapplied resources to breakdowns in communication. – The processes most companies use to develop plans, allocate resources and track performance make it difficult for top management to discern whether the strategy-to-performance gap stems from poor planning, poor execution, both or neither. Indeed, because so many plans imbed overly ambitious projections, performance shortfalls are frequently written off as "just another hockey-stick forecast." And when plans are realistic and performance falls short, executives have few early warning signals. They often have no way of knowing whether critical actions were carried out as planned, resources were deployed on schedule, competitors responded as anticipated, etc. Of course, without clear information on how and why performance is falling short, it is virtually impossible for top management to take appropriate corrective action. 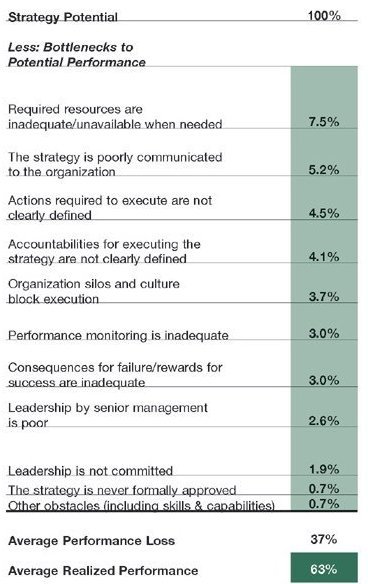 – In many companies, planning and execution breakdowns are reinforced – even magnified – by an insidious shift in culture. This change occurs subtly but quickly, and is very hard to reverse once it has taken root. First, unrealistic plans create the expectation throughout the organization that plans simply will not be fulfilled. Then, as the expectation becomes experience, it becomes the norm that performance commitments won’t be kept. So commitments cease to be binding promises with real consequences. Rather than stretching to ensure commitments are kept, managers, expecting failure, seek to protect themselves from the eventual fallout. They spend time covering their tracks rather than identifying actions to enhance performance. The organization becomes less self-critical and less intellectually honest regarding its shortcomings, losing its capacity to perform.

As significant as the strategy-to-performance gap is at most companies, there are ways to close it. Indeed, a number of high-performing companies – Barclays, Boeing, Cisco Systems, Dow Chemical, 3M, Roche, Textron and others – have taken steps to realize more of their strategies’ underlying potential. Rather than focus on individual process improvements to close the strategy-to-performance gap, these companies strive to avoid the gap altogether by creating an integrated strategy-to-performance loop (as illustrated in Figure 3). They work on both sides of the planning and execution equation, raising standards for both activities simultaneously and creating clear and specific linkages between the two. The process involves six steps: 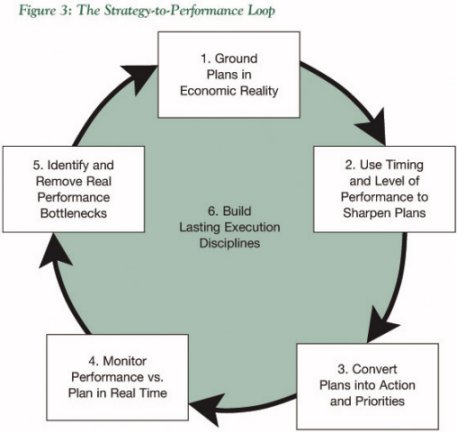 – High-performing companies ensure that the financial assumptions underlying their business plans reflect both the real economics of their markets and the actual performance experience of the company relative to competitors. This provides top management with an objective assessment of the level of financial performance that can be realistically achieved by each business over time. While seemingly straightforward, for most companies, grounding plans in economic reality requires a fundamentally different approach to business planning.

– High-performing companies use the timing of results, as well as the absolute level of performance, to produce more realistic and measurable projections. Focusing only on long-term performance goals – e.g., "By 2009 we want to be generating an ROI of at least 20%" – leads to narrow and often bitter debates about annual targets and prospective bonus plans. The dialogue around strategy becomes a political process, with business unit management arguing for lower profitability projections (to secure annual bonuses) and top management pressing for more stretch (to satisfy the board and other external constituents). The plans that emerge from these negotiations usually specify the level of performance that each business will be expected to deliver, but typically say nothing about the timing of resource deployment required to execute the strategy and, therefore, little about the timing of performance delivery.

– For any strategy to be executed successfully, thousands of tactical decisions and actions need to be taken. But not all of these tactics are equally important. In most instances, a few key steps must occur – at the right time and in the right way – to realize a strategy’s performance potential. High-performing companies devote extra time to making these priorities explicit and then make sure they are carried out appropriately.

– One of the biggest challenges companies face in driving strategy execution is to understand the precise level of inputs (e.g., sales resources, capital investment, etc.) required to produce the desired level of performance or output. Seasoned executives have a keen sense for these relationships, but they develop this capability over time through trial and error. High-performing companies like Wal-Mart, Cisco Systems and others use real-time performance monitoring to help executives accelerate this trial-and-error process. Specifically, these companies continuously track their resource deployment patterns and their results against plan, using this continuous feedback to reset planning assumptions and realign resources. This real-time performance information allows management to detect and remedy plan flaws and execution shortfalls – and to avoid confusing one with the other.

– Perhaps the most troubling element of the strategy-to-performance gap is the fact that most companies do not have a clue as to why it exists – or persists. As a result, top management wastes time and energy attacking symptoms rather than tackling the underlying disease. By contrast, executives at high-performing companies are much more forensic in their approach to resource allocation, working hard to identify the real bottlenecks to effective strategy execution and then deploying resources to remedy the situation.

– Once the plans are economically grounded, performance is being monitored real-time and execution logjams have been identified and cleared, leading companies focus on improving the underlying capabilities of their people. They strive to make each employee 15% better at what they do – irrespective of the individual’s role or his or her business’s strategy. Improving the core skills and capabilities of a company’s workforce is no easy task – often built up over many years. But once they are in place, they can drive superior planning and execution for many decades.

In September 2004, Marakon Associates, in collaboration with The Economist Intelligence Unit (EIU), conducted a global survey of senior executives at large companies (sales of at least $500 million). Representatives from 197 companies responded. More than a third were from companies with sales greater than $1 billion. The survey was designed by Marakon and conducted by the EIU online.

The profile of the survey respondents broke down as follows: