United States: The Lead COVID-19 Vaccine Candidates: Where We Are And What You Should Know

by Jamie L. Graham
Kilpatrick Townsend & Stockton LLP
Your LinkedIn Connections
with the authors
To print this article, all you need is to be registered or login on Mondaq.com.

Exciting developments are being reported for COVID-19 vaccine candidates - on a daily basis. There are nearly 200 vaccine candidates, with at least 20 in late-stage clinical trials. Of those, the FDA has approved both the Pfizer/BioNTech and Moderna mRNA vaccines. The leading vaccine candidates of AstraZeneca, Janssen and Novavax are in Phase 3 trials with FDA approval on the horizon. Those and others to watch are described in more detail below and listed in the following chart: 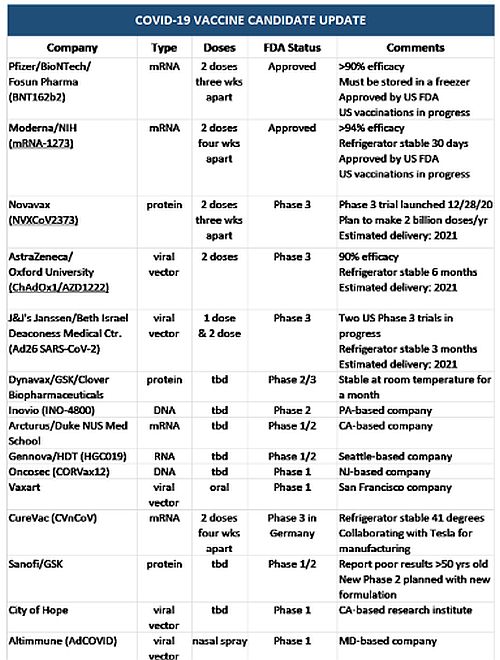 Pharmaceutical companies, Pfizer, BioNTech and Fosun Pharma collaborated on an mRNA vaccine candidate for the prevention of COVID-19 infection using a two dose regimen. This FDA-approved vaccine was previously granted Fast Track Designation by the FDA and is currently being administered in the US. Fast Track Designation facilitated meetings with FDA to discuss all aspects of development to support licensure and provided the opportunity to submit sections of a Biologic License application (BLA) or New Drug Application (NDA) on a rolling basis as data became available rather than the standard practice of waiting until every section of the NDA is completed before the entire application was reviewed. Pfizer previously announced that the vaccine candidate demonstrated a 90% prevention rate during Phase 3 trials. This rate was determined when 94 participants out of nearly 44,000 in the Phase 3 study came down with COVID-19 infection. An independent board of experts examined how many of the sick people had received the vaccine and how many had received the placebo and calculated 90% effectivity. The threshold established by the FDA is 50% effectivity, but note that two doses of the measles vaccine provides a 97% prevention rate. Pfizer received federal funding as part of Operation Warp Speed, an initiative that provided funding to pharmaceutical companies to develop COVID-19 vaccines very quickly. Although this vaccine candidate was the first to receive FDA approval, one disadvantage is that it has questionable stability at temperatures above -70º C (94º F). The vaccine will need to be stored in a freezer and packaged with dry ice during transit, which may add administrative complications and increase costs. Once thawed, the vaccine can be refrigerated for five days. Furthermore, mRNA vaccine technology is new and has never been approved by the FDA before.

The FDA-approved COVID-19 vaccine, mRNA-1273, contains an mRNA molecule encoding for a prefusion stabilized form of the Spike (S) protein. This vaccine candidate was developed by Cambridge, Massachusetts-based Moderna in collaboration with investigators from the US Government's NIAID Vaccine Research Center. The first clinical batch, which was funded by the Coalition for Epidemic Preparedness Innovations, was completed in February and underwent analytical testing. In May, the FDA granted mRNA-1273 Fast Track designation. The Biomedical Advanced Research and Development Authority (BARDA) is supporting the continued research and development with $955 million in federal funding. This mRNA COVID-19 vaccine remains stable at 2-8° C (36-46° F), the temperature of a standard home or medical refrigerator, for 30 days; remains stable at -20° C (-4° F) in a freezer for up to six months and at room temperature for up to 12 hours, thereby facilitating vaccine administration.

Maryland-based Novavax also received federal funding as part of Operation Warp Speed. The Novavax vaccine candidate is engineered from genetic sequence of the virus that cause COVID-19 disease and was created using Novavax's recombinant nanoparticle technology to generate antigen derived from the coronavirus spike (S) protein. The antigen is combined with a patented saponin-based Matrix-M" adjuvant to enhance the immune response and stimulate high levels of neutralizing antibodies. This vaccine candidate contains purified protein antigen and cannot replicate, nor can it cause COVID-19. The Novavax vaccine candidate received Fast Track Designation by the US FDA. Although slower to develop, protein-base vaccines have an excellent record of safety and effectiveness. After getting promising results from preliminary studies in monkeys and humans, Novavax launched a Phase 3 trial in the UK in September and launched large (30,000 people) Phase 3 trial in the US and Mexico at the end of December. Phase 3 trial volunteers will be separated into two groups: individuals 18 through 64 years old and those aged 65 and older. Attempts will be made to include at least 25% from the older age group and to include people who are at higher risk of severe COVID-19 disease, such as Blacks, Native Americans, or Latinx and people who have underlying health conditions such as obesity, chronic kidney disease or diabetes. Novavax has reached an agreement with the Serum Institute of India, a major vaccine manufacturer, that should enable production of as many as 2 billion doses a year.

A vaccine in development by the British-Swedish company AstraZeneca, the University of Oxford and university spin-out Vaccitech, uses a replication-deficient chimpanzee viral vector based on a weakened version of a common cold virus (adenovirus) containing the genetic material of the SARS-CoV-2 virus spike protein. After vaccination, the surface spike protein is produced, priming the immune system to attack the SARS-CoV-2 virus if it later infects the body. In a Phase 1/2 trial, vaccine developers found that the vaccine raised antibodies against the coronavirus as well as other immune defenses. The vaccine began Phase 2/3 trials in England and India, as well as Phase 3 trials in Brazil, South Africa, and the US. AstraZeneca reports that their manufacturing capacity will be up to 3 billion doses of the vaccine in 2021 on a rolling basis, pending regulatory approval. The vaccine can be stored, transported and handled at normal refrigerated conditions (2-8º C/36-46º F) for at least six months and administered within existing healthcare settings. In September, AstraZeneca halted global trials of the vaccine to investigate one volunteer, who developed a form of inflammation called transverse myelitis. The trials have resumed globally with regulators in the US, UK, Brazil, South Africa and Japan confirming that it was safe to do so. Emergency use authorization was granted at the end of 2020/beginning of 2021 in the UK, Argentina and India.

This vaccine candidate is being developed by Janssen Pharmaceutica, a Belgium-based division of Johnson & Johnson in collaboration with Beth Israel Deaconess Medical Center with funding from BARDA. The Phase 3 clinical trial had previously been halted due to adverse events in a single participant, but the trials have now been resumed. J&J remains on track to meet its goal of providing one billion doses of a vaccine yearly with the first batches of a COVID-19 vaccine anticipated to be available for EUA in early 2021. This COVID-19 vaccine candidate utilizes J&J's AdVac® technology platform, based on the development and production of adenovirus double-stranded DNA vectors to carry an antigen's genetic code without causing disease, which was used to develop and manufacture Janssen's European-approved Ebola vaccine and to construct Zika, RSV, and HIV vaccine candidates. Because DNA is not as fragile as RNA, this vaccine candidate, if successful, is estimated to remain stable for two years at -20° C and at least three months at 2-8° C (36-46° F) and would not require new infrastructure for administration. J&J launched its Phase 3 trial in September with up 60,000 participants intended to represent populations that have been disproportionately impacted by the pandemic. In the U.S., this includes significant representation of Black, Hispanic/Latinx, American Indian and Alaskan Native participants.