United States: Oracle Hits Rimini With Order To Show Cause Why Rimini Shouldn't Be Held In Contempt For Violating The Injunction

On July 10, 2020, Oracle filed a Motion For an Order To Show Cause Why Rimini Should Not Be Held in Contempt for allegedly violating the Rimini I injunction.  Oracle contends that Rimini has violated multiple provisions of the injunction involving its provision of fixes and updates for Oracle's PeopleSoft, J.D. Edwards and Database software products.  Oracle contends that Rimini has "cross-used" Oracle software from one customer environment to support another customer in violation of the injunction.  Likewise Oracle contends that Rimini has violated the injunction by preparing derivative works in violation of the Nevada court's order.  Oracle seeks to bar Rimini from providing further support for its PeopleSoft and J.D. Edwards software product lines.  In addition to a bar order, Oracle seeks to impound Rimini's "infringing copies and computer systems".  Alternatively if the court declines to impound Rimini's copies and computer systems, then Oracle requests that such copies and systems be put in third party escrow.  Oracle customers supported by Rimini may want to keep an eye on the progress of the litigation, and whether Oracle prevails in its motion.  Rimini's response to Oracle's motion is due on July 31, 2020, and we will be watching for it.

Although Rimini has not yet filed its Opposition much of what it may say is previewed in various briefs filed in opposition to or in support of summary judgment in the Rimini II litigation.  However, so much is redacted from those briefs that it is difficult to follow all of the issues and Rimini's factual assertions.

Rimini has opposed Oracle's Motion for Summary Judgment on Rimini's Migration and Windstream Hosting.  In Rimini I the court ruled that Rimini could not host its customers' software on its own premises.  In order to comply with the Court's ruling, Rimini contends that it moved certain PeopleSoft customer environments out of its own facilities and to third party hosts or clouds, and one of these is Windstream.  Oracle contends that the mere act of copying the software to move it to these third party hosting sites was a copyright infringement.  Rimini contends it was a fair use to comply with the Court's Order.

Now Oracle also appears to be alleging that for customers with facilities restrictions in their licenses, these customer environments cannot be moved to the cloud or hosted offsite, unless the customer has a physical ownership interest in the building where the software is hosted or owns the computer systems.  Rimini claims that this is nonsense, and instead the issue is not who owns the building or computer systems but who exercises control over the software.  This seems right to us.  According to Rimini: 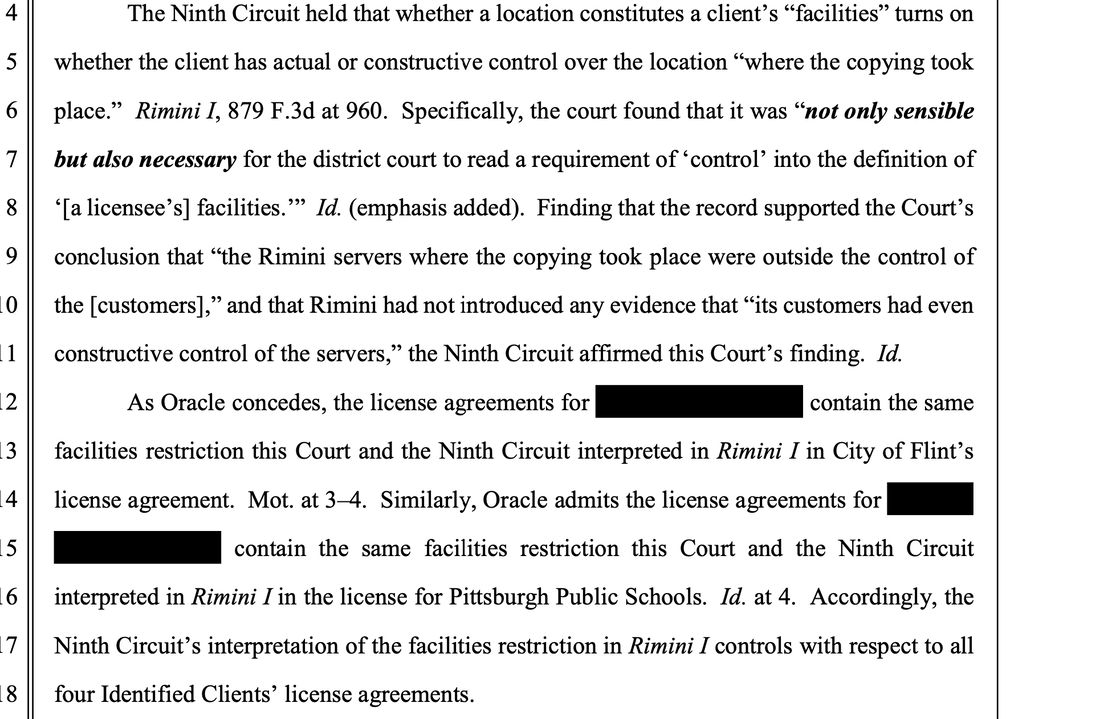 We look forward to seeing Rimini further flesh out its arguments in its upcoming brief.

Oracle contends that Rimini continues to use the IT environments of a small subset of Rimini customers' to create PeopleSoft updates ("prototype" environment) and then copies the updates into the environments of its other customers ("retrofit" environment). Oracle calls this cross-use and claims it violates the injunction. Rimini pushes back against Oracle's assertions and argues that "cross-use" is not an industry term.

Rimini contends that it now has separate development and QA environments for all clients, which is very different from what the Court found Rimini was doing in Rimini I. According to Rimini: 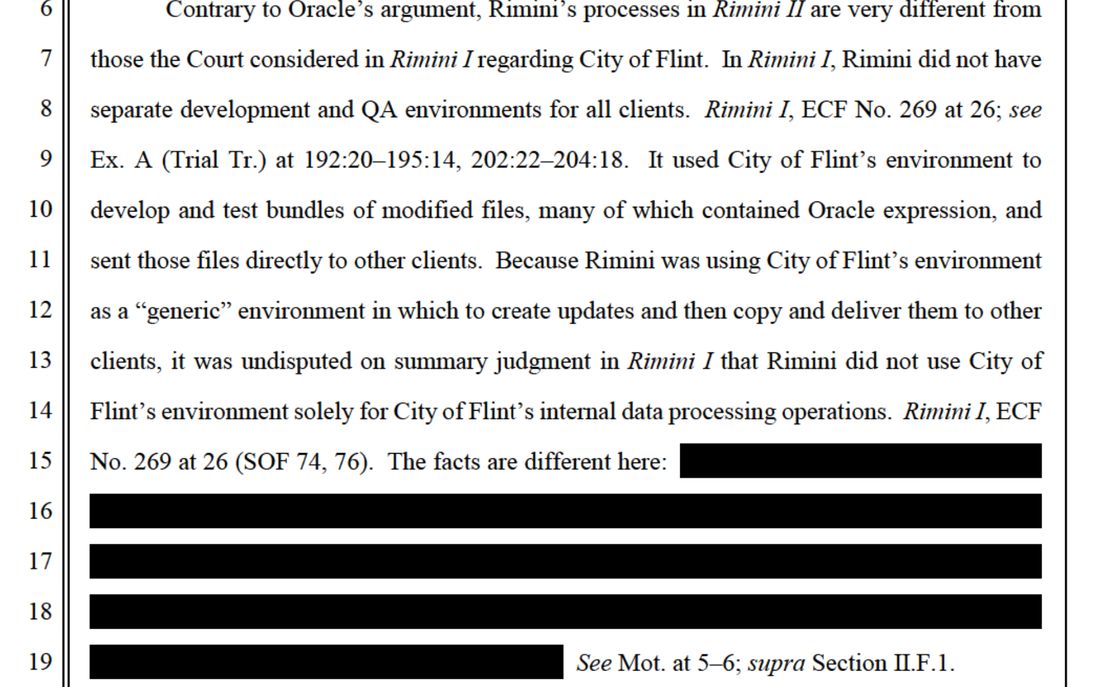 Although Rimini claims that the facts are different here, the explanation for what is different is redacted, making it hard to assess Rimini's contentions.

Rimini also argues that contrary to Oracle's assertions it is not creating a derivative work. Citing the Micro Star and Galoob cases, Rimini argues that to constitute a derivative work in the software context, a "work must substantially incorporate protected material from the pre-existing work". Rimini denies that it does so, and expressly claims that the work that Oracle takes issue with is actually Rimini's own work, and does not contain any Oracle code or expression.