United States: Everything You Need To Know Georgia's Elections

Dentons' Georgia public policy team delves into the data to give you an exhaustive look at how the 2018 midterms played out across the Peach State.

While Kemp has claimed victory, Abrams has yet to provide any indication that she will concede at this point in the voting counting process. In a statement provided to CNN, her campaign cited several specific reasons, including that three of the state's largest counties "have reported only a portion of the votes that were submitted by early mail" and four other large counties "have reported exactly 0 votes by mail." Together, the seven counties "are expected to return a minimum of 77,000 ballots," according to the campaign.

For Abrams to push this race to a runoff she would have to pick up approximately 50,000 of the remaining 77,000 outstanding ballots she claims exist. According to the Abrams campaign the majority of outstanding mail-in ballots are in three metro Atlanta counties—Cobb, DeKalb and Gwinnett, all areas of strong Democratic support. Therefore, reaching a runoff would require a significant post-election day boost but given the political lean of the outstanding counties, while it remains statistically unlikely, an extended campaign season is not completely outside the realm of possibility.

Regardless of whether this race ends with a Kemp victory or continues on to a December 4th runoff, the historic turnout highlights the effectiveness of both sides' base-directed campaign strategies. Turnout is reaching presidential levels, with 3.9 million votes counted in the races thus far—only 100,000 votes short of the 2016 presidential election total of 4 million votes. Abrams has already received more votes than Hillary Clinton did in 2016 by approximately 20,000 but Kemp remains in the lead.

Governor Nathan Deal won by 8 percent in 2014 and Trump won by 5 percent in 2016. Kemp, however, is only leading by 1.8 percent in what is widely seen as a solidly Republican state. Demographic changes, polarization and strong leadership have all contributed to returning Democrats to relevance in statewide Georgia politics.

Although, at the present moment, Abrams appears to have come up short there are three main factors worthy of analysis which led to her surge and Kemp's equally significant counterattack. First, Gwinnett and Cobb Counties both continued their leftward trends witnessed in recent elections. Second, historic turnout in Fulton County. And third, overwhelming rural dominance by Kemp and the activation of the Trump coalition.

The maps above, from right to left, show results from the current (2018) election for governor, the 2016 presidential election and the 2014 midterm election for governor. In 2014, Democrat Jason Carter faced off against Republican Governor Deal. In 2016 Clinton ran against Trump and, of course, this year Abrams and Kemp are vying to become Georgia's next executive.

Abrams, from the beginning, was intent on boosting turnout and riding diversifying demographics and a ballooning urban population in and around the City of Atlanta—and she succeeded in achieving that goal. Fulton County, long a Democratic stronghold that voted 63 percent in favor of Carter and 69 percent for Clinton came in at 72 percent for Abrams. In percentage terms alone the continuing liberalization of the county is clear. In four years, from 2014 to 2018, statewide Democratic candidates increased their vote share by 9 percent.

However, increasing the Democratic vote percentage was not alone going to make this a competitive race. Abrams not only received a higher percentage of votes but she also increased the number of votes themselves. In Fulton County, she received 6,503 more votes than Hillary Clinton received in Fulton in a presidential year, which historically have a higher turnout. Moreover, Abrams added to Carter's total Fulton County vote count by 137,464 votes, a 183 percent increase.

However, as the graphics above reveal, as in Fulton County, the Abrams victory isn't defined by a 13 percentage point increase since 2014 but rather a massive Democratic turnout. Abrams received more votes in both Gwinnett and Cobb than Hillary Clinton. Moreover, she expanded Carter's vote tally by about 200 percent in Gwinnett and 190 percent in Cobb, adding 85,938 votes and 79,437 votes to his totals in the respective counties.

The substantial increase in new Democratic voters from 2014 to 2016 is exactly what the Abrams camp sought and the onslaught of Democratic voters could only be answered by an equal, presidential-level turnout in rural, Republican Georgia, which the Kemp campaign delivered. Kemp was so effective in building a rural ground campaign and tying himself to President Trump that he witnessed only a slight turnout drop-off from Trump's 2016 victory.

In many rural parts of Georgia, Kemp vastly outperformed Deal in terms of vote count. In fact, he nearly kept pace with Trump in terms of votes per county, surely benefiting greatly from two visits from Vice President Pence and an appearance by Trump himself at a get-out-the vote rally. Just as Abrams added massively to Carter's turnout, Kemp did the same in comparison to Deal's, increasing the term-limited incumbent's vote total in Walker County, for instance, by more than 200 percent and by approximately 150 percent in each of the other five counties we examined.

In sum, both candidates turned out their base at presidential-election levels and consolidated support in key partisan areas. Should his lead hold up, Kemp will have withstood a formidable metropolitan blue wave thanks to the unwavering support of Trump country.

Lieutenant Governor
Geoff Duncan defeated Sarah Riggs Amico with 52 percent of the vote. Amico suffered a substantial drop-off from the top of the ticket, while Duncan remained neck-and-neck with Kemp throughout the night. Amico, as of this writing, received 94,430 fewer votes than Abrams while Duncan only lagged 27,073 votes behind Kemp.

Secretary of State
After neither candidate broke 50 percent of the vote, the race for secretary of state is expected to go to a runoff. Republican Brad Raffensperger received 49 percent, John Barrow received 48 percent and Smythe Duval received 2 percent. Duval netted 48,491 more votes than his libertarian counterpart in the governor's race. Also of note, Barrow received 62,514 more votes than Sarah Riggs Amico, despite showing up lower on the ballot.

Georgia Public Service Commission
Incumbent Republican Tricia Pridemore has seemingly defeated Democrat Dawn Randolph for the PSC seat in District 5, however the race has yet to be formally called. Republican Chuck Eaton appears destined for a runoff with Democrat Lindy Miller. That race currently stands at 49.89 percent for Eaton to Miller's 47.45 percent. The two are separated by just 93,436 votes.

Top vote-getter
Republican State School Superintendent Richard Woods beat Democrat Otha Thornton with 2,034,151 votes, or 53 percent of total votes cast. Woods received the most votes out of any candidate on Tuesday's ballot. Agriculture Commissioner Gary Black, GOP incumbent, was close behind with 2,026,207 votes, or 53 percent, in his race against Democrat Fred Swann.

Fifty-three percent is the high-water mark for statewide Republicans in this election. In 2014, Republican Doug Everett, a Republican incumbent on the PSC, raked in 68 percent of the statewide vote.

Both of the competitive US House of Representative races are in the suburban Atlanta counties that came out strongly for Abrams. As such, both the race in Georgia's 6th and 7th congressional districts remain extremely close. At the moment incumbent Republican Rob Woodall leads Democrat Carolyn Bourdeaux, 50.59 to 49.41 percent, with a vote difference of 3,184. Bordeaux has not conceded the race.

In the 6th congressional district, Democrat Lucy McBath leads incumbent Republican Karen Handel 50.45 percent to 49.55 percent. Only 2,872 votes separate the two women. Handel, like Abrams and Bordeaux, has not conceded the race. In order to demand a recount the trailing candidate must be within 1 percentage point. At the present, Handel is within that window.

While democratic enthusiasm may not have materialized statewide to loosen the Republican grip on statewide offices, the Democratic enthusiasm in suburban Metro Atlanta created a significant blue undertow, leading to a net gain of eleven seats in the Georgia House and two seats in the Georgia Senate. This is a substantial result for Georgia Democrats, who knocked off several entrenched Republicans and, in some cases, convincingly defended seats many thought were in play. All of the races that flipped from Republican to Democrat, shown below, were in the suburbs of Atlanta. Democrats now hold 21 out of 56 seats in the state Senate and 75 out of 180 seats in the state House. 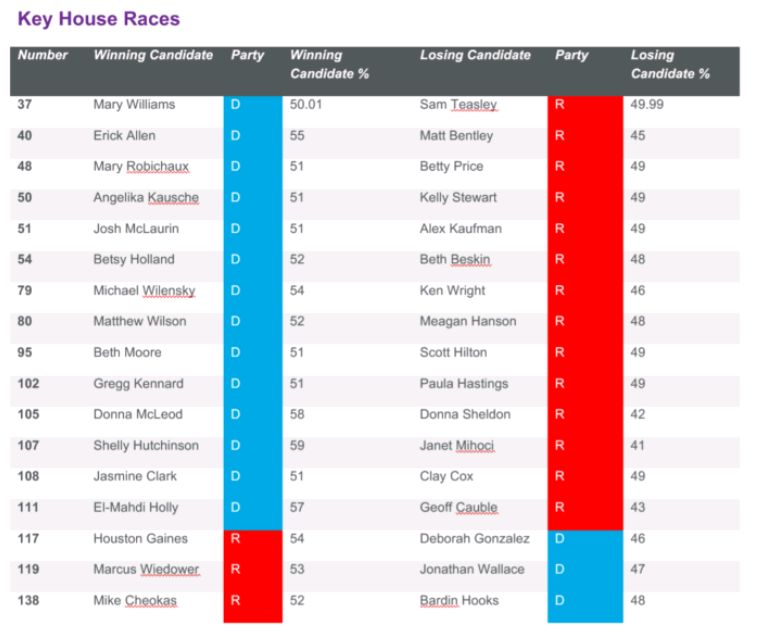 Across the board the suburbs played an instrumental role in increasing Democratic influence under the Gold Dome, however, Republicans remain firmly in power.