by Zachary D. Jones
Stites & Harbison PLLC
Your LinkedIn Connections
with the authors
To print this article, all you need is to be registered or login on Mondaq.com.

The United States government has awarded more than $280 billion in contracts so far this fiscal year—FY2015 ends September 30.  Last year, that number was just over $445 billion on September 30.  (Data available online at https://www.usaspending.gov).  While this year's total contracts awarded will be less than last year, the disparity reveals that the rest of August and September is likely to set a blistering pace of federal contract awards.  In late July, the Government Accountability Office (GAO)—tasked with investigating how the federal government spends taxpayer dollars—released what many are calling a scathing report.  The report explains that many federal agencies fail to follow the procurement regulations found in the Federal Acquisition Regulations (FAR).  The report is a good reminder for contractors who bid on federal procurements to be watchful of procurements that appear to deviate from the rules.  Data suggest not only that these agencies are breaking the rules, but also that protestors who call them on it are increasingly getting some relief.

Congress typically funds federal agencies through annual appropriations.  An elementary principle of federal fiscal law is that if an agency's appropriations are not obligated by the end of the fiscal year in which the appropriation was made, those funds expire and generally become unavailable to the agency.  Often, agencies spend their appropriated funds late in the year in an effort to save some "dry powder" early on in case an unforeseen need arises.  With Congress always looking for ways to cut spending, agencies do not want to end a fiscal year with unobligated funds.  In Washington it is hard for an agency to justify to lawmakers the need for more money if the money Congress appropriated last year—money the members of Congress had to explain to their constituents was needed then—was not used.  Accordingly, at the end of each fiscal year agencies resolve this dilemma by finding ways to close the gap between the portion of their appropriation obligated and the portion faced with becoming expired on September 30.  Too often that solution is a less than ideal procurement.  With only a little over $280 billion in federal contract awards to date, federal agencies look posed to make another year-end dash to spend our cash.

The recent GAO report makes this year-end spending spree a little more concerning.  In the July 2015 GAO report (available online at http://www.gao.gov/products/GAO-15-590), GAO evaluated a sample of procurements made by federal agencies under the Federal Supply Schedule (FSS).  The FSS is used by agencies to purchase certain goods and services, typically the type of commercial items one would expect to find on the shelf, and represents a small percentage of overall federal spending (in FY2014 it was $33.1 billion or only about 7% of federal contract dollars).  The individual contracts, however, can be substantial.  For example, one of the procurements the GAO report examined exceeded $120 million.  In total the GAO looked at 60 procurements made under the FSS.  What it found, among other things, is that of those 60 procurements, in only 23 did the procuring agency actually bother to get three or more prices or quotes from contractors—a fairly clear requirement in the FAR.  Basically, what the report found was that federal agencies do not appear overly concerned with ensuring competition for the taxpayer's procurement dollars.

Sometimes, agencies have a valid (or at least excusable) reason for not getting multiple prices or quotes from contractors.  One reason is that some items the government purchases are simply not items widely available on the market.  In other words, for some procurements there just was not enough contractors who could supply the good or service sought.  Unfortunately, as the GAO report makes clear, sometimes the agencies simply issue solicitations which either overly restrict competition or are not offered to enough potential bidders.  For example, in one of the procurements studied, an agency specified only a single brand of a commonly used filing system.  To make matters worse, the agency then failed to solicit any contractors that sold the specified brand.  The result was the agency failed to receive a single response to the solicitation.  When it failed to get a response to the solicitation, the agency procured the specified brand under the FSS directly from the manufacturer—with absolutely no competition from anyone.  When confronted by the GAO, the agency admitted that many other brands would have met their needs.  Essentially, the agency admitted that it failed "to specify its needs and solicit offers in a manner designed to achieve full and open competition, so that all responsible sources are permitted to compete." 10 U.S.C. § 2305.

Other data also support the conclusion that agencies may not be too concerned with ensuring competition for government procurements.  Bid protest statistics from the Comptroller General (available online at http://www.wifcon.com/protestsgaostat.htm) indicate that the number of protests resulting in the protester receiving some form of relief has continued to rise since 2001. 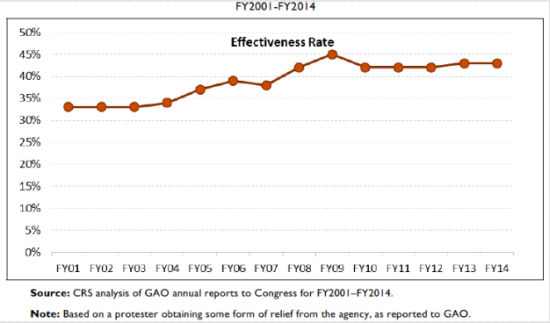 In July 2015, the Congressional Research Service (CRS) published a report (available online at https://www.fas.org/sgp/crs/misc/R40227.pdf) that indicated between FY2008 and FY2014 the number of bid protests filed increased by 45% while total government spending decreased 25% over the same period.  Though CRS indicates in its report that the number of protests sustained by the GAO has decreased over recent years, it acknowledges the effective rate continues to increase.

CRS's report could be seen as confirmation of what GAO's evaluation of the 60 FSS procurements revealed.  GAO's report concluded that agencies are not ensuring solicitations are as competitive as they should be.  CRS's report indicates that increasingly bid protests are being lodged which result in the agency taking corrective action.  Specifically, bid protests are being resolved without the GAO having to sustain the protest.  Because bid protests based on unduly restrictive solicitations (like the agency above who specified a single brand when other brands would have met the agency's needs) must be filed prior to the agency receiving bids, the best explanation for the rising effectiveness of protests is agencies are increasingly likely to agree to expand a solicitation's competitiveness if a bidder or potential bidder raises a valid concern about the solicitation's competitiveness prior to bid time.  In those instances where the agency takes such corrective action, the bid protest is recorded as effective even though it is not sustained.

The next month and a half will prove telling.  In 2013, The National Bureau of Economic Research (NBER), a private, nonpartisan research organization, found that the annual dash to spend our cash—or as they politely put it, agency "year-end spending"—results in a significant drop in the quality of goods procured.  (NBER report available online at http://www.nber.org/papers/w19481.)  One conclusion from all of this data is that as federal agencies rush to obligate their appropriations, there is likely to be a rash of procurements which do not abide by the rules.  Accordingly, federal contractors and suppliers need to watch for procurements that deviate from the rules, especially procurements which unnecessarily limit competitiveness.

It may be bad news for taxpayers to hear how our hard earned tax dollars are being spent by the folks in Washington; but the good news is the data suggest that agencies appear willing to correct these errors when pointed out by protestors.