Blockchain has recently been in the spotlight, mostly due to the 2017 surge in cryptocurrency values and the rise of initial coin offerings ("I.C.O.'s"). Many legal advisors have clients who use or wish to use blockchain in their businesses, and yet, the actual technology is often not discussed in the legal field.

Blockchain is notable because it allows different parties to collaborate without trusting each other. No trust is required because the technology is designed to (i) validate the information stored on the blockchain and (ii) make that information difficult to alter retroactively.

Q 1: How Did the Technology Develop?

The idea behind blockchain was originally developed in 1991 by a group of individuals attempting to timestamp digital documents.1 As such, blockchain is based on a timestamp server, which works by widely publishing information to a decentralized network that collectively checks the validity of the timestamp.

After the 2008 financial crisis, confidence in financial institutions was low, and as an alternative, the idea of a decentralized payment network was seriously considered. Around this time, Satoshi Nakamoto used the blockchain concept to create the decentralized digital currency Bitcoin.2

Q 2: Are Blockchain and Cryptocurrency the Same?

No. Blockchain is the technology behind cryptocurrency.

Blockchain is a distributed database that maintains a list of blocks.

As explained later, every block is composed of a certain number of records, including the history of every previous block up until its creation. This results in the blocks essentially being linked, or "chained," to each other, hence the term "blockchain." It can best be illustrated as follows:

The entire chain is encrypted and every transaction is linked to a unique hash (discussed below) that is easy to verify and almost impossible to falsify because blockchain is maintained by a network of computers, also called "nodes." The nodes within a network work independently to process mathematical formulas and update the database. Once one node has solved an equation, the result is shared within the network, and if a certain level of consensus is reached, the blockchain is updated. This is known as proof of work (discussed in detail below).

Depending on the relevant blockchain, the network can be decentralized, or it can be kept among a group of accredited users.3 This is often referred to as a "blockchain network." Similarly, a blockchain can be public or private, depending on the intended use.

A block is composed of three items: 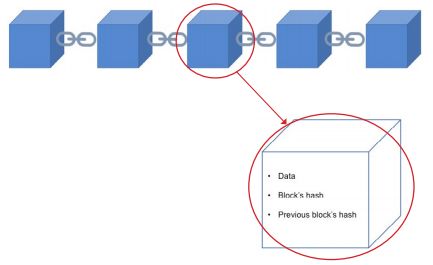 Blocks contain previous transactions (if any) in the chain and incomplete transactions that are waiting for validation from the nodes. Once approved, these transactions become the data stored on a particular block.

Q 5: What Type of Data Is Contained in a Block?

The type of data stored in a block depends on the blockchain it is a part of. For instance, if the block is part of the Bitcoin blockchain, the data it contains will include the sender, the receiver, and the number of transferred Bitcoins.

A hash is a unique series of letters and numbers that identifies a validated block. As such, it constitutes a cryptographic signature, similar to a fingerprint. When the block's underlying transactions are validated by the network, its hash is calculated.

The hash of the previous block is always contained in a block, along with its own hash.

This constitutes one level of blockchain security. If a block is altered, its hash will change, and the chain will be broken because the subsequent block contains a historical reference that no longer matches with the previous block's new hash.

Given that computers nowadays are very powerful, it is possible to recalculate the hashes of the blockchain to recreate the subsequent blocks. To enhance its security, the technology also contains a proof of work system.

Q 8: What Is the Purpose of Using Blockchain Technology?

Q 9: What Is the Link Between Smart Contracts and Blockchain?

A smart contract is the coded version of contractual-like arrangements. These codes are stored inside the blockchain and result in self execution of the contract, through the blockchain, if the terms of the coded agreement are met.

Q 10: What Are Other Potential Applications?

In addition to cryptocurrencies and smart contracts, potential examples of how blockchain can be used are the following:

Because it is a decentralized system, blockchain can eliminate the need for intermediaries, such as banks, lawyers, and brokers – which can have a wide appeal to clients. Advisors should continue to monitor the evolution of this technology and the potential implications for clients, as well as the legal industry.