Today, January 12, 2022, the Bureau of Ocean Energy Management (BOEM) announced that on February 23, 2022 it will hold a wind energy lease auction for six areas in the New York Bight (NY Bight), the coastal area between Long Island and the New Jersey coast. BOEM's issuance of the Final Sale Notice (FSN) for the wind energy lease areas comes just days after New York State Governor Kathy Hochul announced in her State of the State address that the New York State Energy Research and Development Authority (NYSERDA) will issue its next offshore wind solicitation following BOEM's lease sale in the NY Bight. NYSERDA's forthcoming solicitation, which the Governor stated would seek at least 2,000 MWs of capacity, will procure the renewable energy credits from offshore wind projects and is expected to include the availability of $500 million in state funding for investments in wind port infrastructure and supply chain development.

BOEM's auction will allow offshore wind developers to bid on six lease areas comprising a total of 488,201 acres. This area could host up to 7 gigawatts of additional offshore wind development in the NY Bight - enough to power nearly 2 million homes - and even more as technology advances. The execution of any lease resulting from the lease sale auction would enable the winning bidder to move forward with project-specific plans to develop offshore wind energy facilities within the lease area. Such project-specific plans would be subject to subsequent environmental and technical reviews, public comment, and BOEM approval prior to development of the leased area.

In June 2021, BOEM issued a Proposed Sale Notice (PSN) that identified eight lease areas encompassing 627,331 acres (Figures 2a and 2b, below) for potential offshore wind development. In the FSN, BOEM reoriented the eight originally-proposed lease areas and reduced the total lease area by 22%, ultimately arriving at the six final lease areas depicted in Figure 1. According to the FSN, these modifications arose out of concerns raised in comments filed by ocean users, the fishing industry, the U.S. Coast Guard, navigation interests, the National Marine Fisheries Service, and the Department of Defense (DOD). 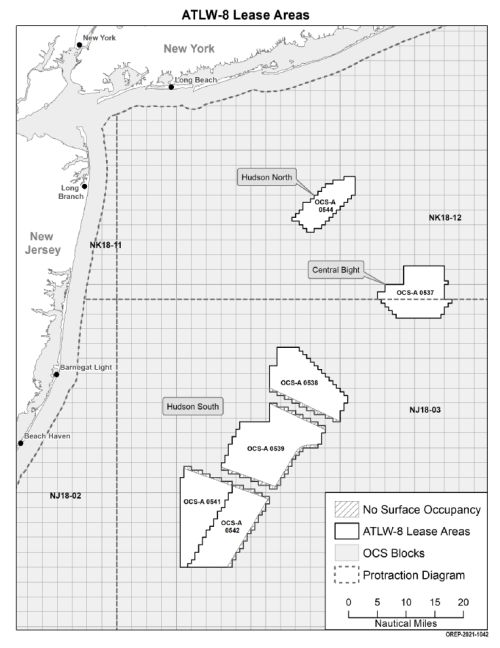 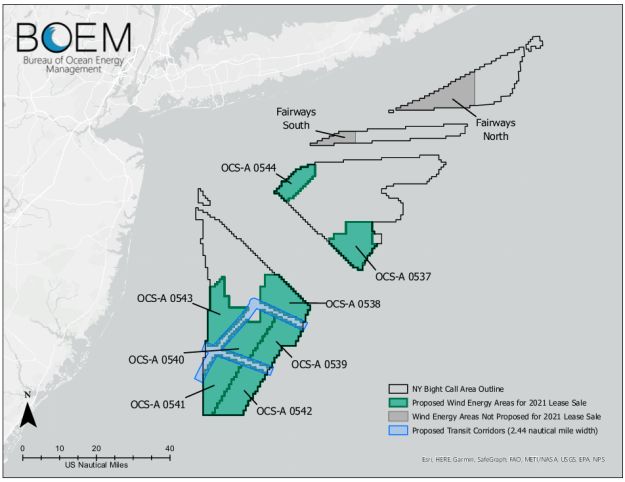 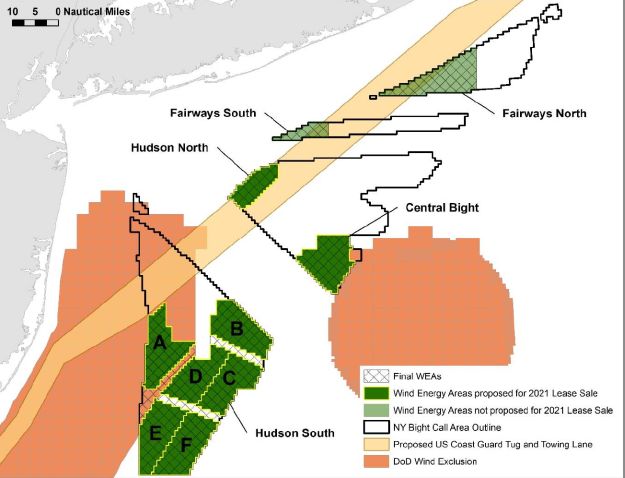 BOEM removed from leasing consideration proposed Lease Area OCS-A 0543, commonly referred to as Hudson South A, due to concerns raised by the fishing industry and DOD. Should circumstances change in these areas, BOEM may reconsider offering this area for lease in a future sale. BOEM also removed several areas that overlap with fishing activity and seafloor features that may be potentially sensitive to impacts from offshore wind facility construction. According to the FSN, the removal of these areas reduced the viability of OCS-A 0540 (Hudson South D) as a standalone lease area, which led to the expansion of the western boundary of OCS-A 0539 (Hudson South C) and removal of Hudson South D. By removing Hudson South A from consideration, the proposed "transit corridor" between Hudson South A and Hudson South D was no longer necessary. As its final reconfiguration of the proposed lease areas, BOEM removed the transit corridor and expanded OCS-A 0541 (Hudson South E) and OCS-A 0542 (Hudson South F).

BOEM added several lease stipulations and refined several proposed lease terms in response to stakeholder feedback on the PSN. Notably, awarded leases will be limited to one per bidder. Other new and refined stipulations aim to promote engagement with tribes, ocean users, underserved communities, other agencies, and interested stakeholders; flexibility in transmission planning; advances in the domestic supply chain; and the use of project labor agreements. For example, lessees will be required to "make every reasonable effort to enter a project labor agreement covering the construction stage of any project proposed for the Lease Areas." Additionally, "BOEM is continuing a planned approach to transmission and is evaluating options including the use of cable corridors, regional transmission systems, meshed systems, and other mechanisms. Therefore, BOEM may condition COP approval on the incorporation of such methods where appropriate. BOEM encourages those who obtain leases from this sale to engage in early coordination with adjacent lessees, states, Tribal Nations, and other ocean users to identify ways to minimize impacts from transmission. In addition, BOEM has modified the lease stipulations concerning communication with Tribal Nations and parties to explicitly seek input and discussion surrounding transmission easements prior to proposing such easements."

Following its final public meeting on the NY Bight leasing process on January 19, 2022, BOEM will hold a mock auction for 25 pre-qualified potential bidders on February 18, with the monetary action to be held on February 23. BOEM anticipates that the auction will last one business day, although it could go longer, and provisional winners of the lease sale will be announced after the close of the auction.