by
NERA Economic Consulting
To print this article, all you need is to be registered or login on Mondaq.com.

Over the past decade, the number of cases alleging wage and hour violations has been increasing. Such cases include an array of allegations, such as off-the-clock work (including donning and doffing suits); unpaid overtime; missed, short, or late meal periods and rest breaks; employee misclassification; unpaid termination wages; failure to pay minimum wage; and time shaving and improper tip pooling. Cases may be filed in either state or federal court, may range in size from a handful of plaintiffs up to many thousands, and may allege class periods that span several years.

Many of these wage and hour cases have settled, some of them for substantial amounts. To quantify and analyze the characteristics of recent settlements, we collected information on 187 settlements of wage and hour cases that were reported from 2007 to 2010.1 The number of reported settlements increased over this four-year window from approximately 20 (18 in 2007 and 26 in 2008) to around 70 (74 in 2009 and 68 in 2010).

For 48 cases in our sample, the settlement was confidential. However, we found that a total of $1.77 billion was paid to resolve the other 139 wage and hour cases, for an average of $12.8 million per case. The median settlement—the settlement at the 50th percentile of the distribution—was $4.3 million.

These summary statistics mask a large range in individual settlement values. Approximately 25% of the cases settled for less than $1 million, while 20% settled for $20 million or more. 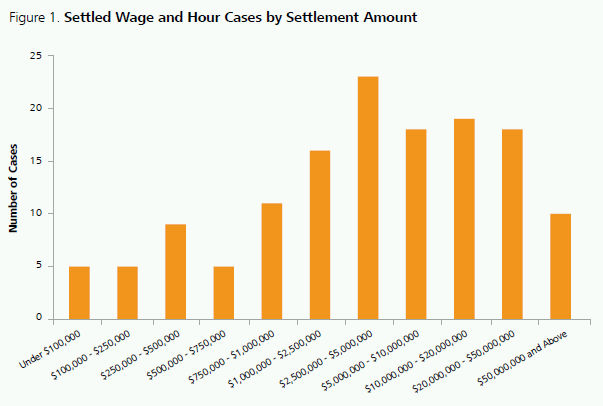 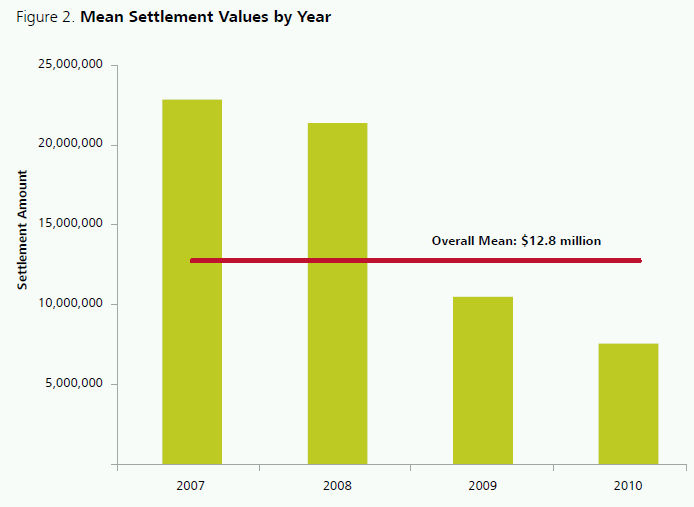 Outlier settlements do not explain the drop-off in recent years. The median settlement, which is less sensitive to outliers than the mean, also exhibits a sharp decrease in 2009 and 2010 relative to 2007 and 2008. 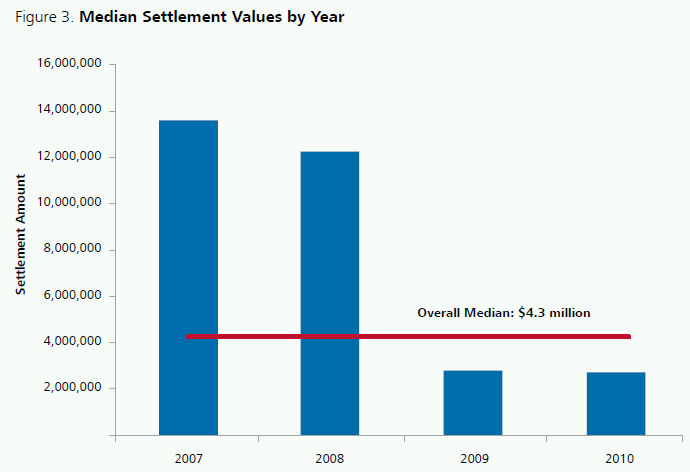 An examination of the distribution of settlements over time, though, reveals one possible explanation for the decline. In 2007 and 2008, very few settlements were for less than $1 million. In 2009 and 2010, however, we find an increasing proportion of these lowervalued settlements in the data, which brings down both the overall average and median settlement amount. 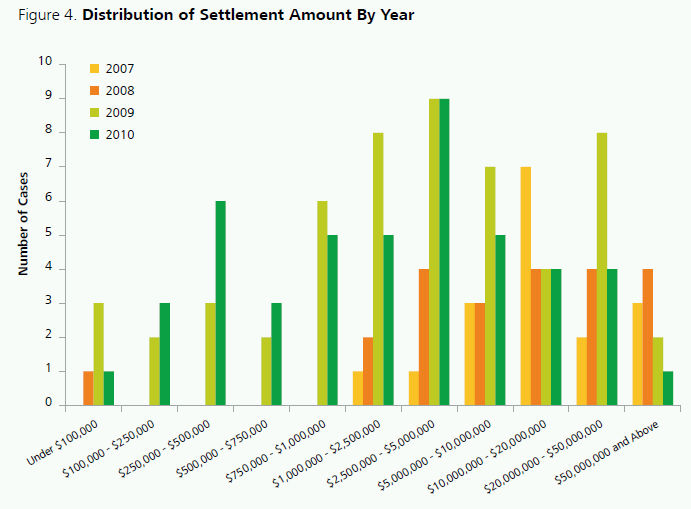 The paucity of settlements less than $1 million in 2007 and 2008 may be a result of data limitations: if lower-value settlements were systematically less publicized in earlier years, this could explain the pattern observed in our data. Alternatively, it is possible that fewer lower-value settlements were made in 2007 and 2008, perhaps reflecting differences in the underlying characteristics of the cases resolved during this time period.

Below, we look in more detail at the characteristics of settled cases that may be correlated with the observed trends in settlement amounts.

For any settlement, a number of case-specific factors may impact the settlement amount, including the size of the potential class, the duration of any alleged class period, the number and type of allegations made in each case, and the jurisdiction involved.

While the public data on these case-specific factors is somewhat limited, it is possible to observe some of these factors for settlements in our database, examining how settlements vary with these characteristics, as well as how the characteristics vary over time.

Settlements by Number of Plaintiff Years

To tease out the impact of these factors on settlements, we coded information about class period duration and counts of plaintiffs whenever this information was available.

For 140 cases, we were able to determine the number of plaintiffs participating in the litigation from the information published at the time of settlement. As shown below, approximately 80 of the cases had fewer than 1,000 plaintiffs, while a handful—six cases—had more than 100,000 plaintiffs.3 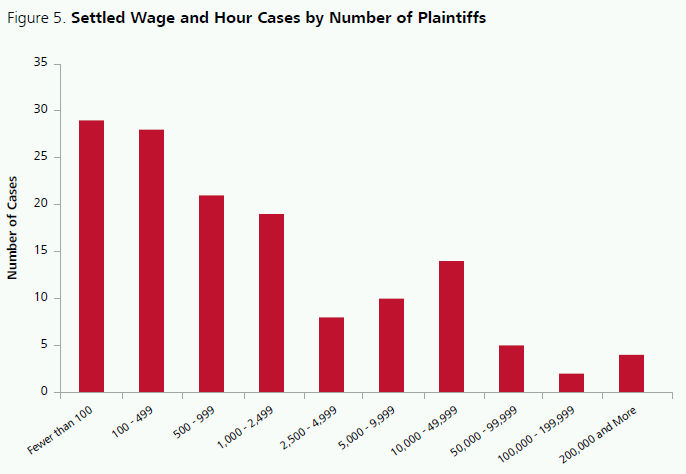 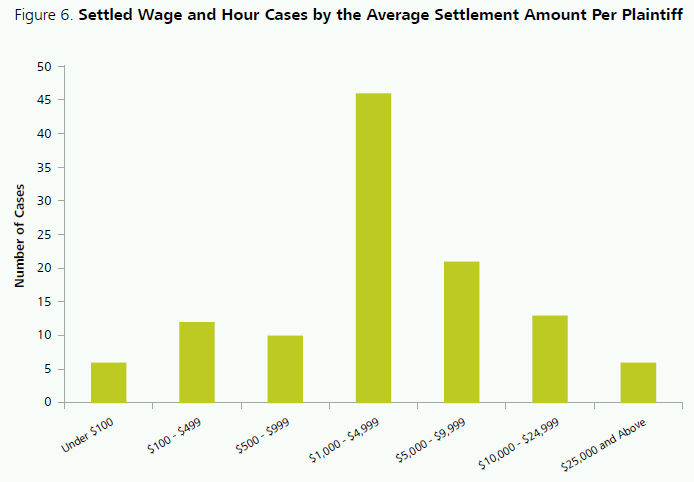 The average per-plaintiff settlement has decreased over time, falling from nearly $8,000 in 2007-2008 to just over $5,000 in 2009-2010. This pattern is similar to the trend in per-case average settlements, but is less dramatic: once we control for the number of plaintiffs in each case, the reduction in 2009-2010 is less pronounced. The underlying data also showed that the handful of cases with very large numbers of plaintiffs (over 50,000) tended to have smaller per-plaintiff averages than cases with fewer plaintiffs.

For 83 settlements, we were able to extract the number of years in the class or collective action period. We find that the duration of the class periods ranged from one to 12 years, with five years being the most common.4 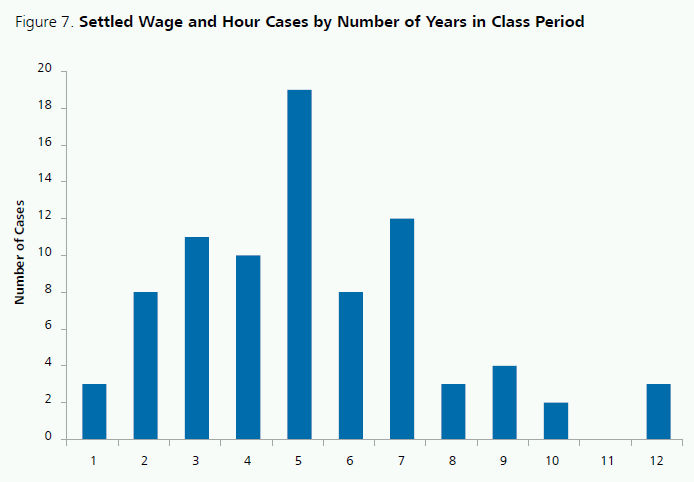 Again, as expected, we find that cases with longer class periods tend to have higher settlements. Over the four-year period, the average settlement amount per year of the class period was $1.2 million.

Breaking the data into two sub-periods, we again find a substantial decrease in the average settlement per class-period-year between 2007-2008 and 2009-2010: the per-year average falls from $3.2 million down to $985,000. Thus, even controlling for the number of years in the class period, we still observe a decreasing trend in average settlement amounts in the last two years. 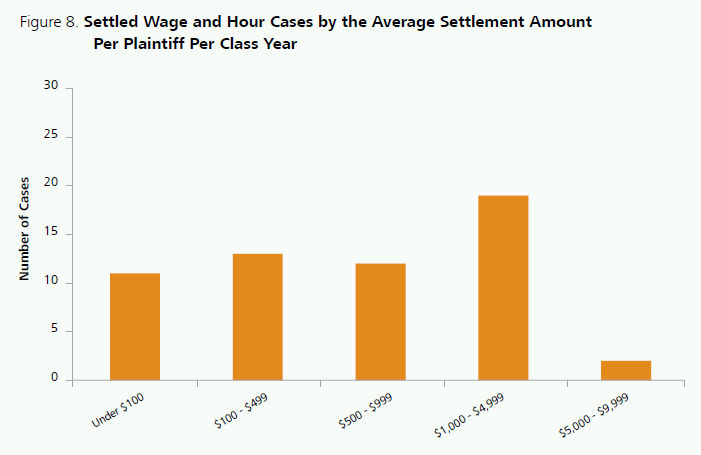 Because only a limited number of the cases in our database contain detailed information both about the counts of plaintiffs and years in the class periods, it is not possible to identify any trend in the plaintiff-year averages between 2007 and 2010.

Settled Claims by Type of Allegation and Jurisdiction

Other case-specific factors, including plaintiffs' allegations and the jurisdiction in which the case is brought, are also likely to have some impact on settlements.

While we are not able to capture case-specific information about the strength of particular allegations in our database, we are able to collect data and classify allegations into a number of broad categories. As noted above, we found that wage and hour plaintiffs often make a number of allegations against an employer in the same case. For example, allegations of off-the-clock work (including donning and doffing cases) often go hand-in-hand with alleged overtime violations. Similarly, misclassification cases are often linked to overtime or minimum wage claims. Considering all such allegations, we find that approximately one-third of the cases involved allegations of unpaid overtime, and one-quarter of the cases alleged off-theclock work.5 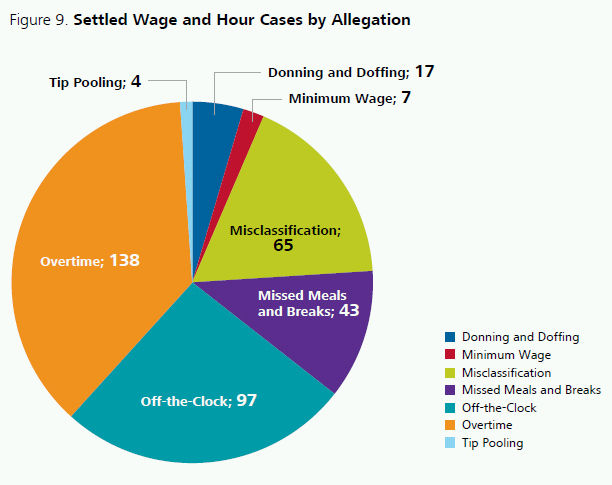 The pattern of allegations has shifted slightly over time: cases settled in 2009 and 2010 are relatively more likely to have overtime and off-the-clock-related allegations, and relatively less likely to have misclassification allegations, than cases settled in 2007 and 2008. This pattern is consistent with other evidence from the database, suggesting that cases with overtime allegations tend to settle for lower amounts, controlling for type of allegation and number of plaintiffs, although the data are not rich enough to precisely estimate these effects.

Even when we control for the length of the class period and the number of plaintiffs, we observe significant variability across individual settlements. This variability may be explained by the type and number of allegations brought in a case, jurisdiction, and other employerspecific factors.

* The authors would like to thank Wooi Yang Chang, Rishad Gambhir, and Mary Elizabeth Stern for their valuable assistance with this paper.

1 Data obtained from Law360 based on an evaluation of articles published between 1 January 2007 and 31 December 2010. Additional case-specific details were obtained from Factiva. Analysis also included a review of the Seyfarth Shaw annual litigation reports for 2007 through 2010. While this data collection methodology yielded a substantial number of wage and hour settlements, particularly those with large settlement amounts and/or large classes, it is not likely to be comprehensive. Also, due to incomplete information, reported statistics exclude the Wal-Mart Multi-District Litigation settlement in 2008, which resolved 63 wage and hour class action cases for over $600 million.

2 Cases filed at federal level, under the Fair Labor Standards Act (FLSA), are typically "opt-in," requiring plaintiffs to actively elect to participate in the class or collective action. Other cases in state court may be "opt-out," with all employees named in the complaint considered class members unless they chose to withdraw from the class. Very large numbers of employees may be involved in these "opt-out" cases. States also have different statutes of limitations related to wage and hour allegations, so alleged class periods may tend to be longer in some jurisdictions than others.

3 Includes all settlements with known plaintiff counts, including those where the settlement amount was confidential.

4 Includes all cases with known class period information, including those with confidential settlement amounts.

5 Includes all cases with known allegation information, including those with confidential settlement amounts.