United States: Power, Politics, And Perspective: United Shades Of America Host W. Kamau Bell Shares His Thoughts On The Issues That Divide Us 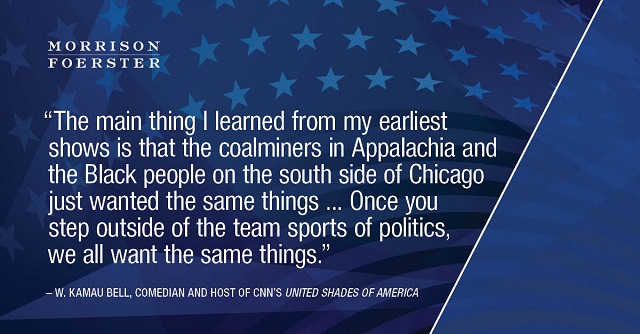 How does the way we are raised, our physical appearance, and our social surroundings affect our perspective on other cultures and identities? This is the sort of question that host and stand-up comedian W. Kamau Bell hopes to answer on his Emmy Award-winning CNN show United Shades of America. On the program, Kamau visits communities across America attempting to better understand the reasons why our nation is so polarized, and perhaps come away with a few lessons on how we can work through the issues that divide us.

MoFo recently invited Kamau to speak about his experiences as part of our D+I Spectrum Speaker series, "Power, Politics, and Perspective." In this second presentation, moderated by MoFo Employment + Labor of counsel Ossie Cousins, Kamau talked about some of his most memorable experiences living as a self-described "Blerd" (short for Black nerd) and some of the most interesting moments he's had throughout his career journey.

Speaking about what inspired him to do a show like United Shades, Kamau stated "I hope that what people get out of it is that whatever your idea is of America, there's a lot more out here than you realize."

When asked about how his own physical identity has impacted how other people see him, and whether he feels those opinions have changed over time, he replied that "I think Muhammad Ali said it best: 'The man who views the world at 50 the same as he did at 20 has wasted 30 years of his life.' – – – It's important as a person who gets older to constantly be evolving your ideas. If you're not, then I think you're wasting your time."

He also spoke about his humble beginnings as a comedian in Chicago, how the subject of his routine began to evolve over time, and how traveling around the country for his current show has changed his idea about what America is. His response was "The main thing I learned from my earliest shows is that the coalminers in Appalachia and the Black people on the south side of Chicago just wanted the same things—better jobs, better schools for their kids, and they were both dealing with the issues of drugs affecting their communities. Once you step outside of the team sports of politics, we all want the same things."