United States: Final G.I.L.T.I. High-Tax Regulations And The Tested Unit: Would A Rose By Any Other Name Smell As Sweet?

by Andreas A. Apostolides and Neha Rastogi
Ruchelman PLLC

"What's in a name? That which we call a rose By any other word would smell as sweet."
– Juliet to Romeo, in Romeo and Juliet, Act 2, Scene 2

In the Tax Cuts and Jobs Act of 2017, Pub. L. No. 115-97 ("T.C.J.A."), the U.S. Congress enacted the most dramatic change to the U.S. Tax Code since 1986, adding among other provisions G.I.L.T.I.'s quasi-territorial tax under Code §951A. The conceptual underpinnings were inspired by the muse of Dave Camp, Chairman of the House Ways and Means Committee's 2014 blueprint for tax reform, in which he recommended a territorial system including a D.R.D., repeal of indirect foreign tax credits, and enactment of a new category of Subpart F income referred to as "foreign base company intangible income", startlingly similar to G.I.L.T.I.1 G.I.L.T.I. requires U.S. shareholders owning at least 10% of a controlled foreign corporation, by vote or value ("U.S. Shareholders"), in which U.S. Shareholders collectively own more than 50% by vote or value ("C.F.C.") to compute for each year the "tested income" for each C.F.C., which includes all gross income over the deductions allocable to such income, excepting certain enumerated categories completely excluded from G.I.L.T.I., including high-taxed foreign income excluded from Subpart F income by reason of Code §954(b)(4) (the "High-Tax Exception").

While Chairman Camp's proposal sought to remove all electivity and make the High-Tax Exception automatic (upon being taxed at a rate of between 50-100% of the U.S. corporate tax rate) for both Subpart F and G.I.L.T.I., the T.C.J.A.'s High- Tax Exception is not automatic. While taxpayers previously had no clear guidance to apply the Exception (which is not self-executing), on July 23, 2020 – nearly a full six years after Chairman Camp dropped his tax reform blueprint and three years since Congress enacted a significant number of his proposals into law – the I.R.S. provided one of the last missing pieces of the puzzle in T.D. 9902 ("Final Regulations"), providing rules for when the High-Tax Exception applies to foreign income and containing detailed guidance on how to make the election. These regulations finalize one of the largest remaining pieces in regulations previously proposed on June 21, 2019 (REG-101828-19) ("2019 Proposed Regulations"); though rules relating to treatment of domestic partnerships, including special rules for S corporations,2 are still pending.

The Final Regulations, characterized by some as a "gymnastic" exercise to coax workable rules for the G.I.L.T.I. area in an exception that originated in the alien Subpart F context,3 provide that the Election is an affirmative annual election and may only be made when a taxable rate condition is met: foreign-taxed income is taxed at an effective rate higher than 90% of the U.S. corporate tax rate, which currently being 21%, means the foreign income must be taxed at an effective rate higher than 18.9%, after factoring in allocable deductions. For this purpose, all deductions at the C.F.C. level allocable to G.I.L.T.I. are relevant to its effective tax rate, including depreciation, amortization, and interest expense.4 The Final Regulations both enable the U.S. Shareholder to determine whether tentative tested net income is high-taxed and provide a mechanism for electing the benefit of the High-Tax Exception ("Election") – based on a novel concept, the "Tested Unit."

Given a strong anti-blending legislative purpose it derived from the legislative history of the Tax Reform Act of 1986, Pub. L. No. 99-514, which also indicated the I.R.S.'s authority to provide for "reasonable groupings of . . . income", the I.R.S. designed the Tested Unit to ensure low-taxed foreign income is not camouflaged amid high-taxed income, escaping U.S. tax. The Final Regulations rely on Tested Units as (i) the level at which to test whether foreign tax exceeds 18.9%, and (ii) the basis on which to exclude high-taxed income from G.I.L.T.I. computations, once the Election is made.

Until simultaneously-issued proposed regulations in REG-127732-19 ("2020 Proposed Regulations") are finalized, extending the Tested Unit concept to Subpart F, Subpart F's high-tax exception continues to apply on an item-of-income basis under preexisting law (instead of Tested Units); the proposal appears a bold move for such a young concept but elegant insofar as it contemplates a unitary election applicable for both high-taxed G.I.L.T.I. and Subpart F income across all C.F.C.'s owned in a C.F.C. group. This reduces planning.

This article introduces the Tested Unit, summarizes the mechanics for making the annual Election, which is made with respect to either a C.F.C. or a C.F.C. Group, and highlights certain issues and concerns, as well as challenges and opportunities for taxpayers contemplating making an Election.

TESTED UNIT – WHAT IS IT?

Prior to the enactment of G.I.L.T.I, Subpart F's High Tax Exception was always applied on an item of income basis. The Tested Unit may appear doggedly alien to anyone used to Subpart F, for under those rules the process is slightly different: a U.S. Shareholder identifies each C.F.C.'s Subpart F income, as defined in Code §952(a) (including foreign personal holding company income, and certain other categories of income), excluding any U.S. effectively-connected income; under the de minimis rule, if less than 5% of gross income is Subpart F, then none of the C.F.C.'s income is treated as Subpart F, whereas if more than 70% qualifies as Subpart F, then 100% is treated as Subpart F under the full inclusion rule. Unless some other exception applies, each item of Subpart F income is then separately evaluated under the High-Tax Exception.

Based on the 1985 legislative history to Code §954(b)(4), which directed Treasury and the I.R.S. to permit reasonable groupings of income, the I.R.S. found that a purpose of the High-Tax Exception in the G.I.L.T.I. context includes preventing blending of income subject to substantially different rates of tax. This meant that a grouping principle unlike what was used in the Subpart F context was required. The 2019 Proposed Regulations required the taxpayer's effective tax rate be determined for G.I.L.T.I. purposes at the level of a qualified business unit as defined in Code §989(a) ("Q.B.U."), which refers to a "separate and clearly identified unit of a trade or business of a taxpayer which maintains separate books and records". The trade or business concept lives in case law.5 Applying the concept requires inherent factual determinations, making the I.R.S.'s call to scuttle that idea in the Final Regulations a very good one.

After considering alternatives, the I.R.S. settled upon something new and seemingly better. Consistent with Congress's purpose to prevent blending of income taxed by different jurisdictions at different rates, the Final Regulations introduce the Tested Unit. At first it may be somewhat confusing that the term "Tested Unit" sometimes refers to a C.F.C., whereas on other occasions, a C.F.C. may include multiple Tested Units. Generally speaking, the former situation arises if the C.F.C. maintains operations in a single country and owns no passthrough interests or branches in another country. In short, in contrast with the Subpart F historic regime, the drafters' selection of the Tested Unit for G.I.L.T.I. high-tax purposes reflects a move to transcend the entity concept.

If a passthrough entity/branch fails to qualify as a separate unit under the above definition, it is referred to as a transparent interest and all its items of income and deduction, including foreign taxes, are rolled up into the Tested Unit that directly owns it, both for purposes of the calculation and Election. Tested Units owned by the same C.F.C. and located in the same foreign country are aggregated together.

When items are reported in more than one Tested Unit's books, the rules assign the income item, together with allocable deductions, to the lowest Tested Unit in the vertical tree – preventing double-counting. Adjustments may be required to the higher Tested Units' books.

Similar to a Q.B.U. each Tested Unit is required to maintain separate books and records, but they're not the same thing: a rose by any other name may smell equally sweet, but this is a wholly different flower. The Tested Unit concept corresponds closely to grouping of items reported on a single local-country income tax return, adjusted to eliminate items so they are not double counted.

The foregoing principles are illustrated by examples below. 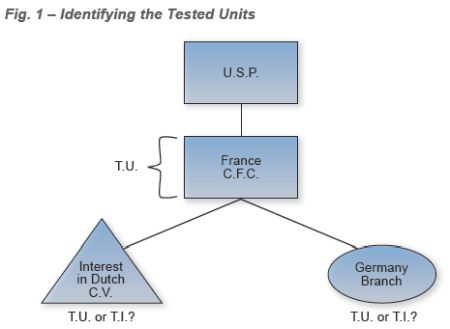 Above United States Parent ("U.S.P.") owns France C.F.C., which in turn owns an interest in a Dutch Commanditaire venootschap, referred to typically as a "C.V.", and separately, a German branch. Unless 100% of the relevant income below U.S.P. is Subpart F income excluded from G.I.L.T.I., U.S.P.'s first task in determining if the Election is applicable will be to identify the relevant Tested Units:

In Figure 2, assuming that each Tested Unit's effective tax rate is approximately equal to the statutory rates shown at right, then Country 2 Branch would not qualify for the High-Tax Exception, whereas Country 1 C.F.C. would.

However, in reality the statutory headline rate's is of limited significance. 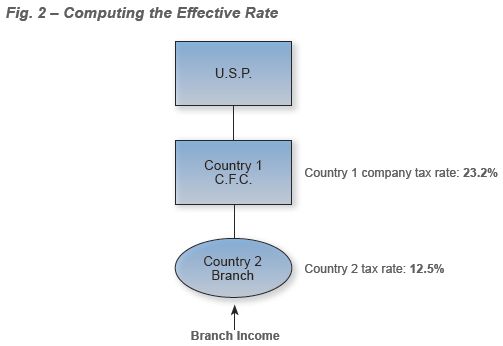 Provided Country 2 Branch results in a taxable presence in Country 2 and separate books are maintained for each unit, they are separate Tested Units and the effective rate should be determined separately for each. For example, if Country 1 C.F.C. engaged in borrowing but expense was all allocated to the branch reducing its net tested income, the branch might qualify for the High-Tax Exception even while C.F.C. failed to qualify.

The move in the Tested Unit rules toward use of local financial statements – rather than earnings and profits computations that were the hallmark of Subpart F and centered on U.S. tax principles – has been compared to similar features currently under discussion as part of the O.E.C.D.'s pillar 2 initiative; with one observer critiquing what was referred to as the Final Regulations' nauseating whipsawing approach, requiring on the one hand use of foreign financial statements of the Tested Unit as the starting point for the high-tax computation, but mandating on the other that allocation of expenses and deductions is done based on U.S. tax principles. Such complexity may not serve clear policy objectives, while leaving open the door to new tax planning opportunities.6

2. See Notice 2020-69, providing an irrevocable election for S corporations with C period accumulated earnings and profits to be treated as the U.S. Shareholder recognizing G.I.L.T.I. income for purposes of adjusting the S corporation's accumulated adjustments account ("A.A.A."), extending the hybrid approach for domestic passthroughs feature of the 2018 proposed G.I.L.T.I. regulations under Code §951A (REG-104390-18), abandoned for an aggregate approach in T.D. 9866, solely for A.A.A. determination purposes.