by Howard E. Johnson , A. Scott Davidson , Chris Nobes and Alan Lee
Duff and Phelps
Your LinkedIn Connections
with the authors

In the first half of 2019, Canadian M&A activity saw a decline in both transaction count and implied enterprise value (EV) compared to the same period last year. The decline was due to increased protectionism worldwide and higher levels of economic uncertainty. During the same period, 832 Canadian companies were sold, representing total disclosed EVs of $52.1 billion. Of the transactions completed, 68% were domestic acquisitions, which is in line with historical averages.1 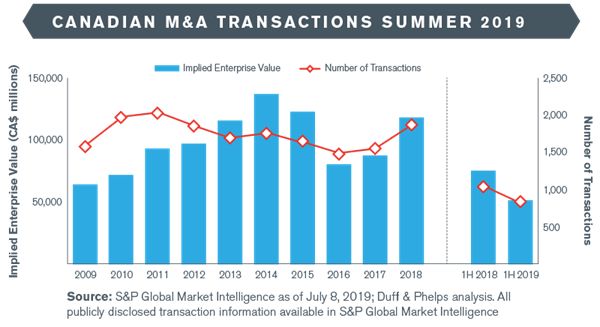 While the number of transactions announced decreased in 1H 2019 (832 vs. 1,055), the median deal value increased from $6.3 million to $10.9 million as the market for smaller deals (less than $100 million) declined faster than that of larger deals. Although megadeals represent only 7% of all transactions, they represented 80% of the total deal value.1

Canada's GDP is expected to grow at 1.4% and 1.8% in 2019 and 2020, respectively, likely slowing down due to a drop in demand in the housing industry and lower expected consumer spending. As a result, Canadian companies may continue to look at acquisitions for growth opportunities. Capital availability remains strong and interest rates will likely remain low, providing a positive environment for sellers.2

A. Scott Davidson
Duff and Phelps