Judge Hicks granted in part and denied in part Oracle's motion for partial summary judgment on cross use and derivative works. Here Oracle sought partial summary judgment on its first cause of action, copyright infringement, on Rimini's second affirmative defense (express license) and seventh affirmative defense (fair use), and on Rimini's first cause of action for declaratory relief. In ruling on this motion, Judge Hicks focused on two specific clients of Oracle, Campbell Soup and City of Eugene, and their Peoplesoft software.

The court concluded that Oracle had established its prima facie case of copyright infringement as it br />
relates to the Campbell Soup environment. According to the Court:

The court next examined whether Rimini had a valid express license defense as it related to making RAM copies of the Oracle software in order to provide support to Campbell Soup. Essentially Rimini as the third party support provider steps into the shoes of Campbell Soup the licensee. Whatever Campbell Soup can do, Rimini can do for its customer. But one major requirement of the license is that the updates, fixes and modifications must be for Campbell Soup's "internal information processing". And that is where Rimini hung itself. 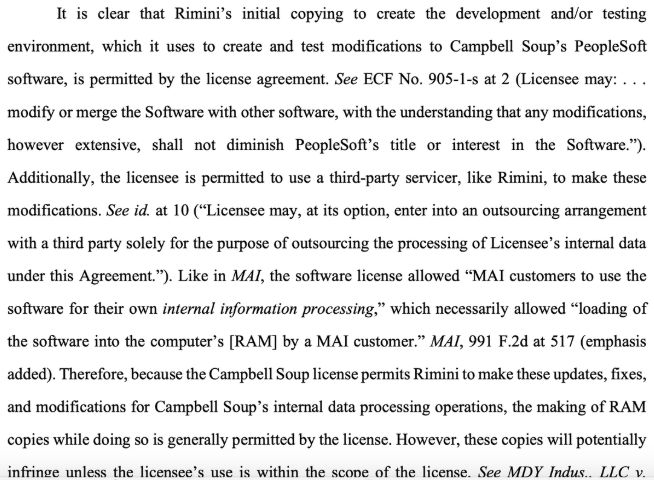 Rimini "prototyped" or developed its Patient Protection and Affordable Care Act ("PPACA") Phase 1 update HCM104286 in Campbell Soup's environment. But it turned out that Campbell Soup had rejected the update and didn't want to use it. So the court reasoned that if Campbell Soup didn't want the update it could not have been developed for Campbell's internal information processing, and Rimini's use was outside the scope of the license.

The court next examined whether Rimini's use of the HCM104286 update developed in Campbell's development environment was improperly delivered to another Rimini client, Toll Brothers. 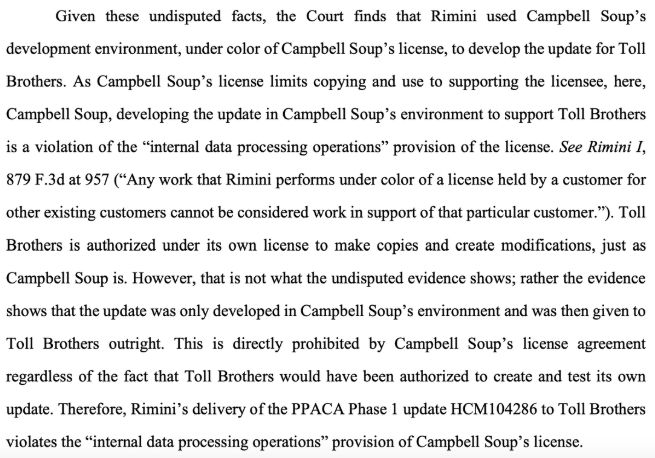 Although Rimini argued that the use of of the update created in the Campbell environment and used with another client was only at best a breach of contract and not a copyright infringement, the court rejected that argument. Instead the court found that "internal data processing operations" is a copyright-enforceable condition rather than a contractual covenant and was therefore a copyright infringement because it was outside of the scope of the license. Thus rather than being limited to contract damages, Oracle will be able to realize the full benefits of copyright law at trial. 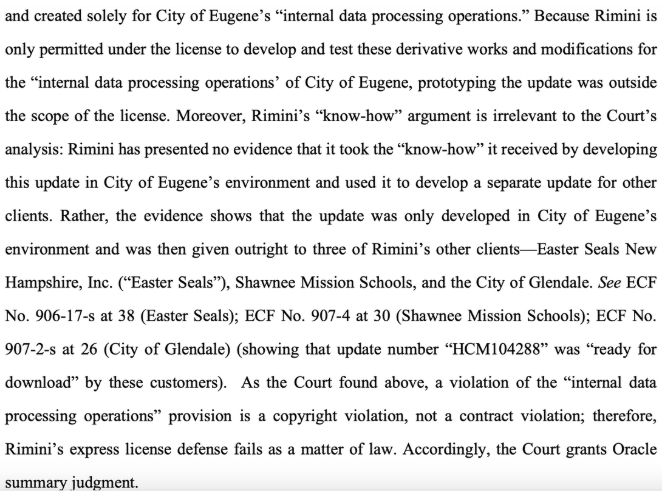 The court further found that Rimini's cross use of the update developed in the City of Eugene environment also violated the prohibition in the license on no distribution or sale of modifications to the software. 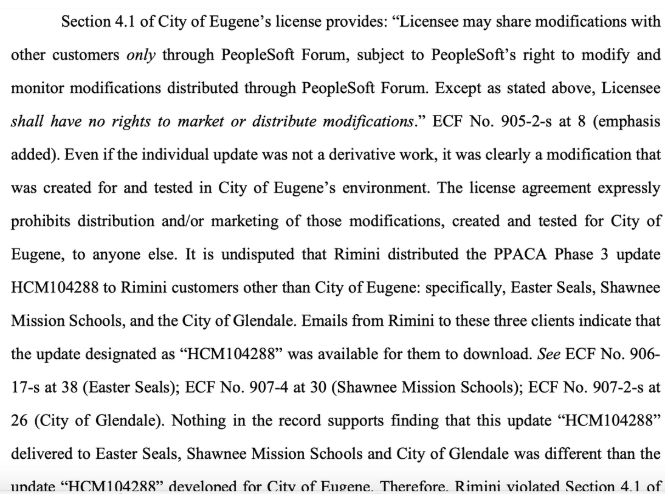 The court again found the "no marketing or sale" provision was a condition and not a covenant making Rimini's use a copyright violation.

Finally, the court rejected Rimini's fair use defense. Weighing each of the four fair use factors, the court found that they were either neutral or weighed in favor of Oracle.

Tactical Law will provide further updates on the court's ruling as they become available.