The Commodity Futures Trading Commission has imposed for the first time a requirement that certain swaps be traded on a regulated market. Beginning February 15, 2014, certain cleared interest rate swaps and index credit default swaps will have to be executed on a swap execution facility or designated contract market, or, in certain cases, on an EU multilateral trading facility.

As a result of a series of actions by the Commodity Futures Trading Commission (CFTC), certain cleared interest rate swaps and index credit default swaps will have to be executed through an order book or a request for quote system on a registered swap execution facility (SEF) or designated contract market (DCM), or, in certain cases, on a qualifying EU-regulated multilateral trading facility (MTF). In connection with this requirement, the CFTC has provided temporary no-action relief from the mandatory trading requirement for so-called "package transactions" that include a swap that would otherwise be subject to mandatory trading, and has clarified certain reporting issues with respect to swaps traded on a SEF or DCM.

These determinations have the potential to fundamentally change the way covered interest rate swaps and credit default swaps are traded, and mark a further step in the reforms imposed on the derivatives markets under the Dodd-Frank Wall Street Reform and Consumer Protection Act. The new mandatory trading requirements will apply to all market participants, other than non-financial end-users electing an exemption from the mandatory clearing requirement. Unlike its approach with the implementation of mandatory clearing, the CFTC has not provided phase-in periods for different categories of market participants.

As a technical matter, the CFTC's determinations, made on the basis of submissions of certain SEFs,1 certify that the relevant categories of cleared interest rate swaps (MAT IRS) and cleared index CDS (MAT CDS) have been "made available-to-trade" (so-called MAT Determinations) for purposes of Section 2(h)(8) of the Commodity Exchange Act (CEA) and are thus subject to the mandatory trade execution requirement. Often referred to as "Required Transactions," these MAT IRS and MAT CDS, unless of block size, must be executed through an order book or a request for quote system on either a SEF or DCM. By no-action letter, the CFTC has also permitted the mandatory trading requirement to be satisfied through use of a qualifying EU-regulated MTF.2

Market participants should note the following consequences of these MAT Determinations: 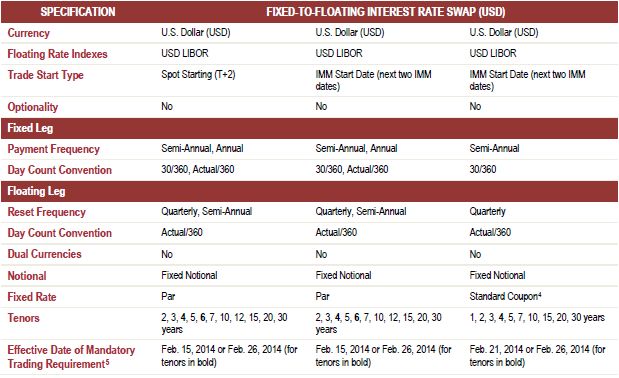 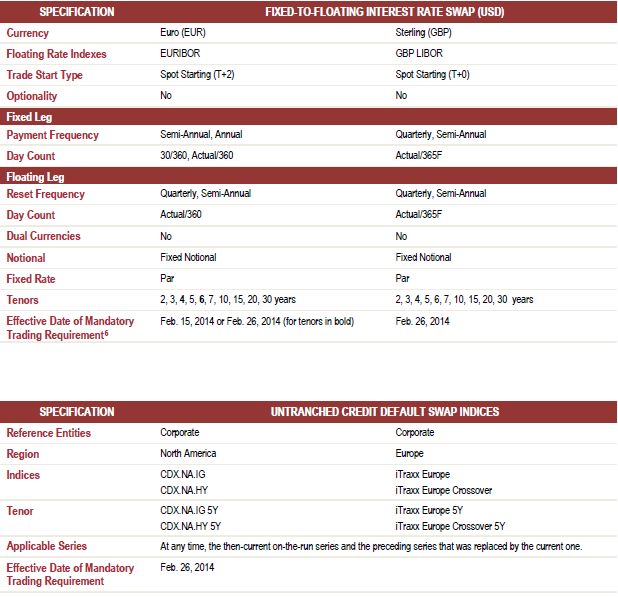 The CFTC has created a website with a centralized list of swaps subject to the trade execution mandate.7

Packaged Trades and Other Relief

Previously, the CFTC stated that grouping component trades together into "package transactions" would not in itself relieve market participants of the obligation to trade such swap(s) through a DCM or SEF, if required under a MAT Determination. A "package transaction" is a trade that combines at least one swap that is subject to a MAT Determination and another swap or financial instrument, which may be a swap, futures contract or cash market transaction.8 However, in response to requested relief from market participants—who cited potential difficulties in the execution and processing of packaged transactions—the CFTC recently granted time-limited, no-action relief from the trade execution requirements for such trades until May 15, 2014.9 In addition, the CFTC's Division of Market Oversight (DMO) held a public meeting on February 12, 2014, to discuss potential difficulties surrounding the execution of package transactions through SEFs or DCMs. It is expected that during the no-action period the DMO will give further consideration to relief for package transactions.

In connection with the February 10, 2014 no-action letter, the CFTC also announced a number of other measures to promote trading on SEFs. One such measure was an interim final rule clarifying that a party to an anonymous trade executed on a SEF or DCM cannot access information in swap data repositories in order to obtain the identity of its counterparty.

The mandatory trading requirements are being imposed at a time of some uncertainty as to the cross-border application of the mandatory trading and SEF requirements. In guidance released late last year, the DMO expressed its view that a multilateral swap trading platform located outside of the United States that provides US persons or persons located in the United States with the ability to trade or execute swaps on or pursuant to the rules of the platform, either directly or indirectly through an intermediary, would have to register as a SEF or DCM.10 Consequently, non-US platforms that have not registered as a SEF or DCM have had to reevaluate the extent to which they provide US persons, or non-US persons acting through US-located persons, with the ability to enter into swaps.11

However, by no-action relief announced on February 12, 2014,12 the CFTC is providing a procedure for EU-regulated MTFs to certify that they are subject to EU regulation that is comparable to US SEF regulation. Such MTFs would not be required to register as a SEF, subject to the satisfaction of certain conditions.13 In addition, trading on such qualifying MTFs would satisfy the CFTC's mandatory trading requirement.

Is the Market Ready?

Some market participants have expressed concern that the MAT Determination process, which relies on a submission by the SEF or DCM, rather than being initiated by the CFTC, could result in MAT Determinations for products that may not be appropriate for mandatory trading (e.g. due to liquidity or other commercial factors). In addition, a swap that has been deemed available to trade will remain subject to the trade execution requirement until all SEFs and DCMs that had listed or offered that swap for trading no longer list or offer the swap for trading. These concerns were brought to the attention of the CFTC by several commenters during the comment period following the release of the proposed DCM/SEF rules:

"SEFs and DCMs should not make the determination because they may have a financial incentive-based conflict of interest to maximize the number of swaps subject to mandatory trade execution. Commenters expressed a related concern that a SEF's or DCM's determination would be influenced by a desire to gain a "first-mover advantage," (i.e., acquiring market share in the trading of a particular swap before other venues can list and develop trading activity in that swap), which would lead to premature or ill-advised mandatory trading of illiquid swaps on a SEF or DCM."14

The CFTC noted, in response to these comments, that only swaps that it has determined are subject to mandatory clearing are eligible for a MAT Determination. The CFTC further noted that, in making a MAT submission, the SEF or DCM would have to address following factors with respect to the swap: (1) whether there are ready and willing buyers and sellers; (2) the frequency or size of transactions; (3) the trading volume; (4) the number and types of market participants; (5) the bid/ask spread; or (6) the usual number of resting firm or indicative bids and offers.

Others have questioned whether these new markets are ready for mandatory trading. SEFs have only been (provisionally) registered since October 2013, and many aspects of their rulebooks, trading functionalities and mode of operations have not necessarily been finalized. The CFTC itself continues to update its guidance as to the regulatory requirements applicable to SEFs. It is not yet clear for many market participants how they intend to access SEFs (either as direct participants, through some form of sponsored access or through another party acting as their agent) and which SEFs they intend to use. Not all SEFs will necessarily offer all products that are subject to a MAT Determination. Although the relief for EU-regulated MTFs is expected to provide useful flexibility for those platforms and market participants, it comes at a late hour and the effect on these markets, both in the short and long term, is unclear.

Whichever SEFs and access methods are chosen, users will need to have appropriate arrangements in place by the effective date of the mandatory trading requirements. According to some, there are also lead times—in some cases three to four weeks—associated with onboarding new customers onto particular SEFs, a factor that market participants may wish to incorporate into any internal compliance timeline.

The mandatory trading requirement is intended to create a significant change in derivatives market structure. Nonetheless, the market may remain in a state of uncertainty as some of the issues identified above are worked out. Market participants will want to watch for further refinements by the CFTC to the requirements applicable to SEFs, and also pay close attention to which contracts must be traded on a SEF or DCM, the markets (including qualifying MTFs) that are available for such products, and the rules, trading protocols and means of access to those markets.

3 The Commission's final rules on the subject require market participants to comply with the trade execution requirement upon the later of (1) the applicable deadline established under the compliance schedule for the clearing requirement for a swap under § 50.25 of the Commission's regulations, or (2) 30 days after the available-to-trade determination for that swap is deemed available to trade upon being approved under § 40.5 or allowed to become effective under § 40.6. As a result, transactions involving swaps in the determinations described herein will be subject to the trade execution requirement, effective February 15, 2014, February 21, 2014, and February 26, 2014, as applicable.

5 Par coupon swaps with a tenor of four or six years (in bold) become subject to the trade execution requirement on February 26, 2014 and are limited to the 3M USD LIBOR floating rate index; Quarterly Reset Frequency; and the following fixed leg conventions: (1) Semi-Annual and 30/360; or (2) Annual and Actual/360.

6 Euro (EUR)-denominated, par coupon swaps with a tenor of four or six years (in bold) become subject to the trade execution requirement on February 26, 2014 and are limited to the fixed leg conventions: Annual and 30/360.

11 Many market participants have taken issue with both the form and substance of this guidance. Alleging that, among other things, the CFTC unlawfully circumvented the requirements of the Administrative Procedure Act and the CEA by characterizing its regulations as "guidance," on December 4, 2013, SIFMA, ISDA and the IIB filed a lawsuit in federal court in the district of DC seeking to block the CFTC's cross-border rules.

12 The no-action relief consists of (1) a temporary no-action letter (No. 12-14) that provides relief to an MTF from the SEF registration requirement and mandatory trading requirement until March 24, 2014, or, if earlier, the time the particular MTF receives permanent no-action relief, and (2) a conditional no-action letter (No. 12-15) that provides a procedure for demonstrating comparability and obtaining permanent relief. The letter contemplates that each relevant MTF will have to apply for relief under the letter and obtain acknowledgment of relief from DMO. The letter contemplates that the CFTC will adopt a more formal exemption process for non-US trading facilities, and leaves open the possibility that a non-US trading facility with a sufficiently high level of US participation might be required to register as a SEF.

13 Among other conditions, the MTF would have to provide the execution methods required under the SEF rules (i.e., an order book and if an RFQ methodology is provided, one that is compliant with the SEF rules), and trades would have to be reported to an SDR and submitted for clearing to a DCO (or a clearing organization with an exemption or relevant no-action relief).