This post continues our examination of the "10% buffer" for Hedging Derivatives, which refers to the amount by which the notional amounts of Hedging Derivatives can exceed the value, par or principal amount of the hedged equity and fixed-income investments. In this post we consider whether funds should apply the 10% buffer to Hedging Derivatives in the aggregate or on a "hedge-by-hedge" basis.

The Argument for a Unitary 10% Buffer

the notional amounts of such derivatives do not exceed the value of the hedged investments . by more than 10 percent."

While plausible in theory, we are not as confident about this approach in practice. It would permit, for example, a fund with Hedging Derivatives for investments denominated in euros, sterling and yen to use the 10% buffer for yen and sterling to exclude short-interest in euros well in excess of the value of the fund's euro denominated investments. This makes the size of the buffer for any one currency depend on how many other currencies a fund is hedging, which would be an odd policy.

Applying a 10% buffer on a currency-by-currency basis may be more consistent with Rule 18f-4's requirement that Hedging Derivatives hedge specific investments and our view that an excluded currency hedge must be for the same currency as those investments. It would also be consistent with the discussion of Hedging Derivatives in the adopting release, which uses the singular rather than the plural:

If the notional amount of a derivatives transaction exceeds the value of the hedged investments by more than 10%, however, it will no longer qualify as a hedge under the limited derivatives user exception." 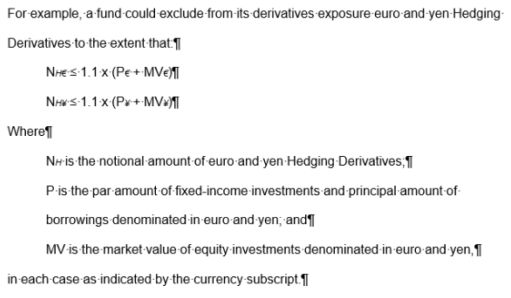 Note the investments and borrowings in the same currency are still aggregated, as they involved the same hedged risk: the exchange rate of the euro or yen as the case may be.

Absent further guidance, the literal terms of Rule 18f-4 would support applying the 10% buffer to a fund's Hedging Derivatives in the aggregate, rather than on a hedge-by-hedge basis. However, we suspect that a hedge-by-hedge approach would be more consistent with the SEC's intent in creating the 10% buffer. This approach would calculate the size of the 10% buffer based on the value, par amount or principal amount of all investments being hedge (e.g., all sterling denominated investments) by a given Hedging Derivative.