United States: Has The Court's Unanimity Rate Been Impacted By Shifts In The Party Alignment Of The Court (Part 1 – Civil)?

This week we're looking at an issue related to our discussion of panel effects: has the unanimity rate on the Court been impacted by shifts in the party alignment of the Justices?

For the entire decade of the 1990s, the Court consisted of four Democratic Justices and three Republicans.  Although none of the changes affected the party alignment, it was nevertheless a period of shifting membership on the Court.  Charles Freeman replaced Daniel Ward, James Heiple replaced Howard Ryan and Michael Bilandic replaced John Stamos in 1990.  Joseph Cunningham replaced Horace Calvo in 1991.  Mary Ann McMorrow replaced William Clark, John Nickels replaced Thomas Moran and Moses Harrison replaced Joseph Cunningham in 1992.  Louis Rathje replaced John Nickels in 1999, and Robert Thomas replaced Rathje the following year.  The Court finally saw a shift in party composition in the 2000 election, when Thomas Kilbride replaced James Heiple, but Justice Kilbride did not participate in his first civil case until 2001.  In that same election, Justice Thomas Fitzgerald was elected to replaced Justice Michael Bilandic. 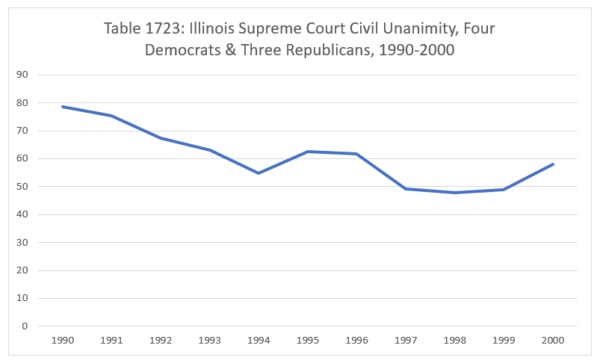 Join us back here next time as we review the data for the next decade.