by Jeffrey A. Greenbaum
Frankfurt Kurnit Klein & Selz
Your LinkedIn Connections
with the authors

In early 2019, the MTA -- which run New York's public transportation system -- refused to run advertising from Dame Products, a company that sells sex toys.  At the time, the MTA said that it rejected the company's advertising because it violated the MTA's Advertising Guidelines.   The MTA said that the ads "promote a sexually oriented business, which has long been prohibited by the MTA's advertising standards."  Here's an example of what was rejected: 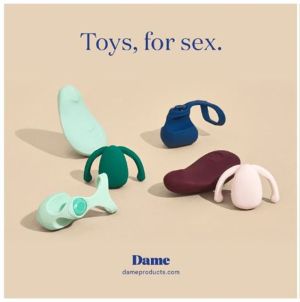 Several months later, Dame Products sued the MTA, arguing that the MTA's failure to approve the ads violates the free speech, due process, and equal protection clauses of the First and the Fourteenth Amendments and the free speech provisions of New York State's constitution. In its lawsuit, Dame had charged that the MTA had unevenly applied its standards.  Dame alleged that there was no basis for the MTA to reject advertising for sex toys, but to accept advertising for the Museum of Sex and men's-focused sexual health products.

Yesterday, the company announced that it had settled its long-running dispute with the MTA.  As part of the settlement, Dame is launching an advertising campaign on New York City's subway system, making Dame "the first female-founded pleasure product brand approved to advertise city-wide through the MTA."

In announcing the settlement, Alexandra Fine, the CEO of Dame, said, "Sexual pleasure is a critical part of wellbeing. Denying Dame advertising space stifles our ability to articulate the value we bring; to innovate and develop products for female sexual pleasure; and enforces sexual shame as a societal norm.  The MTA was disproportionately applying their anti sexually-oriented business clause to women's pleasure advertisements, which is unconstitutional. They allowed erectile dysfunction advertisements to run while denying us, making them a social and economic gate-keeper on who is entitled to pleasure. We've had to fight for our right to advertise and we believe this is a step forward in closing the pleasure gap."

It's unclear whether the MTA plans to update its advertising policies as a result of the settlement.  Currently, the MTA's website says that sex toys, as well as ads promoting a sexually-oriented business, are still prohibited.

ARTICLE TAGS
United States Media, Telecoms, IT, Entertainment Advertising, Marketing & Branding
POPULAR ARTICLES ON: Media, Telecoms, IT, Entertainment from United States
Effective Use Of LinkedIn For Lawyers
Vandenack Weaver
There are literally thousands of lawyers who have a LinkedIn profile but most of them are probably not using the platform as effectively as possible.
Hungry Hungry HIPAAs
Frankfurt Kurnit Klein & Selz
For anyone who has taken even a cursory glance through social media, it seems that suddenly everything just might be a HIPAA violation.
Contract Negotiations: Why Using Your Own Contract Is A Must
Klein Moynihan Turco LLP
While it might seem like a minor point in what can otherwise be more substantive contract negotiations at the outset of a business relationship, wherever possible, you should insist on using your own contract.
Can You Advertise Honey As "Pure" If It Contains Chemicals?
Frankfurt Kurnit Klein & Selz
Sioux Honey, a cooperative in Sioux City, Iowa, makes SueBee honey, which is sold in retail stores throughout the United States. The labeling of the honey promotes the product as "pure" or "100% pure."
Navigating A Smooth Supplier Exit
Levine, Blaszak, Block & Boothby
At some point most companies that use IT services must go through a transition from one supplier to another.
California Assembly Passes Voice Recognition Device Bill Headed To Senate(2021 #7) (Podcast)
Kelley Drye & Warren LLP
The California Assembly recently passed AB-1262 updating an existing law to further limit the use of personal information collected through connected TVs and smart speaker devices.
FREE News Alerts
Sign Up for our free News Alerts - All the latest articles on your chosen topics condensed into a free bi-weekly email.
Register For News Alerts
Article Tags
United States Media, Telecoms, IT, Entertainment Advertising, Marketing & Branding
Related Articles
TCPA Ruling: Fax Inviting Recipient To Take A Survey For Money Is Not An "Unsolicited Advertisement" Duane Morris LLP
Online Travel Update: Expedia Predicts Better Travel Days Ahead; Southwest Embraces Kayak's Business Platform; Oyo Released The Top 10 Most Downloaded Travel Apps In 2021 Foster Garvey
Once Upon A Time In Federal Court (Podcast) Kelley Drye & Warren LLP
You're Invited: "NFTs, A Global Perspective" (a GALA Webinar) Global Advertising Lawyers Alliance (GALA)
Congress Considers New Targeted Advertising Law Klein Moynihan Turco LLP
Mondaq Webinars
UK Construction Law Update: What happened in 2021? What can we expect in 2022?
Charles Russell Speechlys LLP
Webinar London UK
New Legislation Paves the Way for the Future of Aviation
HarleyJames Law
Webinar Nassau Bahamas
More Webinars
Comparative Guides
Anti-Corruption & Bribery
Artificial Intelligence
Aviation Finance
Aviation Regulation
Banking Regulation
More Guides
Mondaq Advice Centres
United States
Advertising and Marketing
United States
International Trade and National Security
United States
Telemarketing
United States
COVID-19
Global
Trademarks in SAARC Countries
More MACs