United States: 1925 Was An Annus Mirabilis For Culture

Goodbye, 2020, a total annus horribilis, if ever one there was.

Hello, 2021, a year in which there is reason to be cautiously optimistic that we will see a return to something close(r) to the "normal" lives we took for granted. To kick things off, a cache of works entered the public domain in the United States early in the morning of January 1st when the television networks tried - and largely failed - to divert our attention from the empty streets of Times Square as the ball dropped. (Anyone else catch Anderson Cooper's and Andy Cohen's cringeworthy interview of Mariah Carey?) Specifically, works that were first published in 1925 (subject to some exceptions) are now available in the United States for all of us to repurpose to our quarantined hearts' content, unshackled from the restraints of copyright law.

1925, it turns out, was an annus mirabilis for literature, music, art and culture. Books first published in 1925 that now are in the public domain include F. Scott Fitzgerald's The Great Gatsby, Virginia Woolf's Mrs. Dalloway, Ernest Hemingway's In Our Time,  and Franz Kafka's The Trial (at least in the original German). Songs include works by Irving Berlin, the Gershwins, Rogers and Hart, and Gertrude 'Ma' Rainey. Check out this list on the website for Duke's Center for the Study of the Public Domain.  Good stuff, indeed.

This is the third year in a row that works published during President Calvin Coolidge's administration have fallen into the public domain. However, as we cautioned last year, there are some important limitations to bear in mind before you use a work from 1925.  Here's an updated version of what we wrote last year.

So, if you are planning to use a particular work worldwide, you should do more research to determine whether you still need a license.  Here is a list (which I have not verified) of authors whose works may be entering the public domain in 2021 outside the United States based on the year of the authors' deaths.

Only the version of the work, as originally published in 1925, is in the public domain in the U.S. Subsequent adaptations, editions and arrangements by later authors may include original content that is independently protected under copyright law.

For example, the composition "Sweet Georgia Brown" (by Ben Bernie, Maceo Pinkard and Kenneth Casey) was first published in 1925 and is now in the public domain in the U.S.. However, an original arrangement of that song that was created later may include elements that continue to enjoy protection under copyright in the U.S.

3.  Watch Out for Sound Recordings:

Pre-1972 Sound Recordings:  Until the passage (in 2018) of the The Classics Protection and Access Act  (the "CPA Act") (enacted as Title II of the Music Modernization Act), pre-1972 recordings were subject to protection under state ("common law") copyright, not federal copyright law. The scope of that protection was extremely murky (to say the least). The CPA Act, in the words of the Copyright Office, "brings pre-1972 sound recordings partially into the federal copyright system" by providing a federal remedy for certain unauthorized use of pre-1972 sound recordings.  However, the period during which an owner of a pre-1972 sound recording can seek a remedy under the CPA Act for unauthorized uses (referred to as the "term of prohibition" in the statute) is different from the term of copyright protection for works fully covered by the Copyright Act.  The details, which are spelled out in 17 U.S.C. §1401(a)(2)(B), are summarized in this chart:

For example, while (as noted above) the composition "Sweet Georgia Brown" is in the public domain, the owner of a 1925 recording of that composition would still have a remedy, under the CPA Act, for the unauthorized use of that recording until January 1, 2026.  Unlicensed users, beware!

5.  Other Laws May Provide Some Protection:

We can anticipate that certain rights holders, in certain instances, may try to use trademark law to prevent (or at least limit) the use of their works even after copyright has expired - at least in cases where they believe that consumer confusion is likely as to whether the rights holder was the source of the work or goods in question. Mickey Mouse is protected not only by copyright law, but also by trademark law. Disney has multiple registrations, including for the word mark MICKEY MOUSE and various versions of the mouse character, including this one which shows Mickey's evolution from the iteration in the 1928 short "Steamboat Willie" through today: 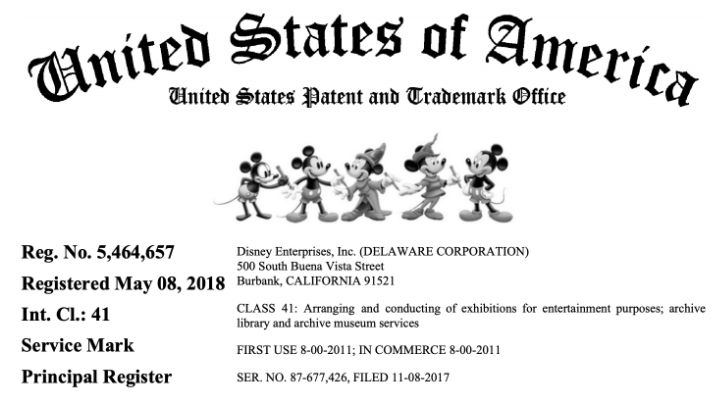 When the copyright in the "Steamboat Willie" version of the character expires (on January 1, 2024), Disney will be armed with these trademark registrations. How successful efforts by Disney and others to use trademark law as a sword  remains to be seen, especially in light of the Supreme Court's decision in Dastar Corp. v. Twentieth Century Fox.   See also  EMI Catalogue Partnership v. Hill, Holliday, Connors, Cosmopulos Inc.

Figuring out the public domain status of a work can be a little tricky.  This handy chart is a good starting place to begin any inquiry.