The United States plunged off the theoretical cliff New Year's Day, but the U.S. House of Representatives pulled us back by passing the U.S. Senate's version of the budget bill on New Year's Day, and lo and behold, we now have clarity on tax rates and tax provisions for 2013 and beyond. While vacationing with his family in Hawaii, President Obama's signature was put on the legislation officially known as the " American Taxpayer Relief Act of 2012" (the Act) on January 2, 2013, by an autopen signing machine in Washington. In the most simplest terms, the legislation:

These tax changes are in addition to the new Medicare surtaxes. Beginning this year, the Patient Protection and Affordable Care Act imposes a 3.8% surtax on unearned income (e.g., passive income of individuals, trusts and estates) and a .9% tax on earned income (e.g., wages and self-employment income) in addition to current Social Security and Medicare taxes. The amount subject to the 3.8% tax is the lesser of net investment income or the excess of the taxpayers' modified adjusted gross income over $250,000 for taxpayers married filing jointly, $125,000 for married taxpayers filing separately and $200,000 for all other individual taxpayers. 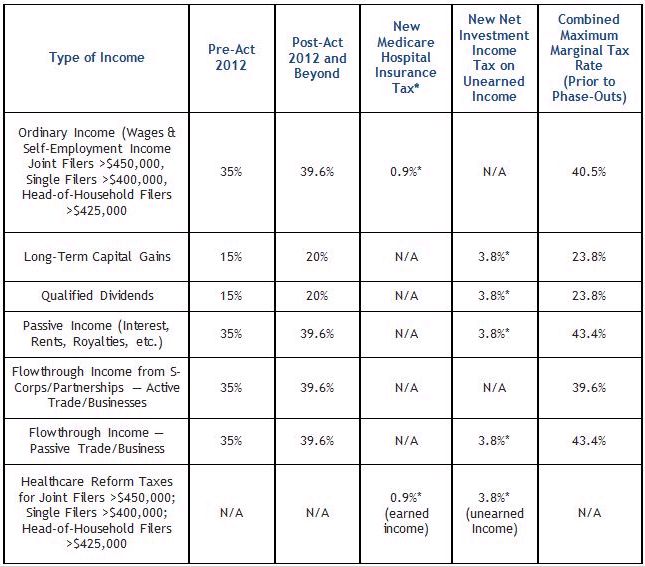 *The New Medicare Hospital Insurance Tax and the New Net Investment Income Tax on Unearned Income applies to income in excess of $200,000 for single taxpayers and $250,000 for married taxpayers filing jointly. For taxpayers subject to the net investment income tax, the effective rate of tax will be 23.8%.

The following chart presents a quick summary of pre- and post-Act tax rates for individuals with incomes below the ranges indicated in the chart above, including retention of the favorable 15% tax rate for capital gains and qualified dividends for individuals earning less than $200,000 a year and households making less than $250,000. 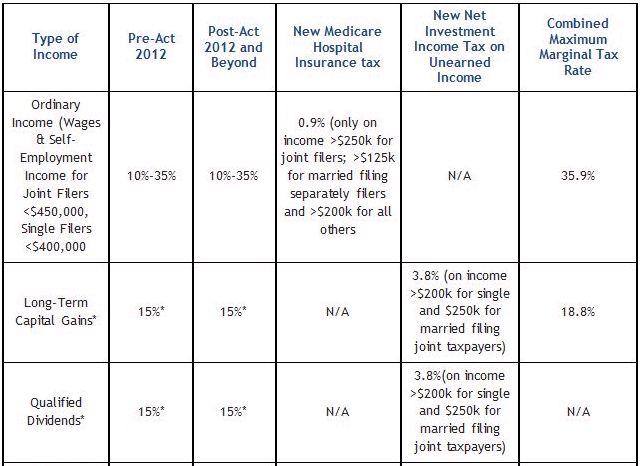 * The zero tax rate on capital gains and dividend income is retained for taxpayers in the 10% and 15% tax brackets.

For taxpayers exceeding the thresholds noted above, the maximum capital gain and dividend rate rises to 20%, from 15%. With the additional and new surtax on investment income, the combined marginal rate for individuals and couples with income above the $400,000/$450,000 thresholds is 23.8%. For taxpayers with incomes below these thresholds, the tax rate remains at 15%. The tax rate is zero for those taxpayers in the 10% and 15% tax brackets.

For tax years beginning in 2013, the previously suspended PEP is reinstated with a starting adjusted gross income (AGI) threshold of $300,000, $275,000, $250,000 and $150,000 for joint filers and surviving spouses, heads-of-household, single filers and married taxpayers filing separately, respectively. Under the phase-out, the total amount of exemptions that can be claimed by a taxpayer subject to the limitation is reduced by 2% for each $2,500 (or portion thereof) by which the taxpayer's AGI exceeds the applicable threshold. These amounts are inflation-adjusted for tax years after 2013.

For tax years beginning in 2013, the previously suspended limitation on itemized deductions is reinstated with a starting threshold of $300,000 for joint filers and surviving spouses, $275,000 for heads of household, $250,000 for single filers and $150,000 for married taxpayers filing separately. For taxpayers subject to this limitation, the total amount of itemized deductions is reduced by 3% of the amount by which the taxpayer's AGI exceeds the threshold amount, with the reduction not to exceed 80% of the otherwise allowable itemized deductions. These dollar amounts are inflation-adjusted for tax years after 2013.

The Act extends for five years the following items that were originally enacted as part of the American Recovery and Investment Tax Act of 2009 (which we previously wrote about here) and that were slated to expire at the end of 2012:

The Act also extends the following items through 2013:

In addition to the various provisions noted above, some new taxes also took effect January 1 as a result of 2010's healthcare reform legislation as we reported here in our Health Care Reform Legislation Alert.

The threshold for the itemized deduction for unreimbursed medical expenses has increased from 7.5% of AGI to 10% of AGI for regular income tax purposes. This is effective for all individuals, except, in the years 2013–2016, if either the taxpayer or the taxpayer's spouse has turned 65 before the end of the tax year, the increased threshold does not apply and the threshold remains at 7.5% of AGI.

Effective for cafeteria plan years beginning after December 31, 2012, the maximum amount of salary reduction contributions that an employee may elect to have made to a flexible spending arrangement for any plan year is $2,500.

As we noted, while the Act addressed the tax side of the fiscal cliff, it did not address all of the "fiscal cliff" issues, most notably sequestration or the automatic spending cuts, which were a huge sticking point with Republican lawmakers. Additional legislation will be needed before March 1, 2013, to address the automatic military and domestic cuts as well as the debt limit.

This Alert is intended to provide a quick update on the latest action by Congress. We would be happy to discuss with you tax-planning implications in light of these changes.

As additional major legislative developments take place, we are available to discuss the impact of a new or pending tax law on your personal or business situation.

For other tax and related topics, please visit our publications page located here or contact any of the practitioners in the Tax Accounting Group.

This article is for general information and does not include full legal analysis of the matters presented. It should not be construed or relied upon as legal advice or legal opinion on any specific facts or circumstances. The description of the results of any specific case or transaction contained herein does not mean or suggest that similar results can or could be obtained in any other matter. Each legal matter should be considered to be unique and subject to varying results. The invitation to contact the authors or attorneys in our firm is not a solicitation to provide professional services and should not be construed as a statement as to any availability to perform legal services in any jurisdiction in which such attorney is not permitted to practice.