As the O.E.C.D. continues its work on the taxation of the digital economy, comments were accepted by the O.E.C.D. Centre for Tax Policy and Administration Secretariat in advance of a public consultation in late November 2019. The public consultation heard input from interested parties on policy development aspects of a "Unified Approach" to the determination of tax nexus and profit allocation rules relevant to customer-facing corporate participants in the digital economy.

The motivation for the O.E.C.D. to seek consensus on profit allocation, and separately on the development of a global base erosion mechanism, is the avoidance of controversy between jurisdictions that impose non-uniform digital services taxes ("D.S.T.'s") in the manner of recent U.K., French, Austrian, Spanish, and Italian legislation.

In November's Insights, we looked forward to reading the comments submitted by organizations with different points of view owing to the extent of their participation in the digital economy. This would be the first opportunity to evaluate how the anti-trust spat between U.S. public tech firms and European market-state governments has spilled over into tax policy. But most importantly, we wanted to read the comments of those that share our general analytical bewilderment over the O.E.C.D. proposal and the positions of states that have adopted D.S.T.'s.

The best developing subplot is the global policy struggle to tax the digital economy within the O.E.C.D. and the E.U., where the policy interests of tech haves v. have-nots and consumers v. producers battle head to head. The broadly North-South partition that caused the demise of the E.U. Council's significant digital presence and D.S.T. directives continues to be argued in the larger forum of the O.E.C.D., finding common cause with U.S. tech firms.

The E.U. and the O.E.C.D. membership is divided between producers of digital economy assets and services, and consumers or users of digital economy services. Given the focus of the Unified Approach is customer-facing businesses, those states with large consumer bases that shop online and produce data used by digital businesses to target marketing and advertising opportunities are generally proponents of policies that result in greater corporate tax payable by digital businesses. The graph on the following page shows that together, the E.U. is a large consumer base, second only to the U.S. and larger than China at 2017 levels. The E.U. countries with D.S.T.'s in place account for about 53% of the E.U. total. 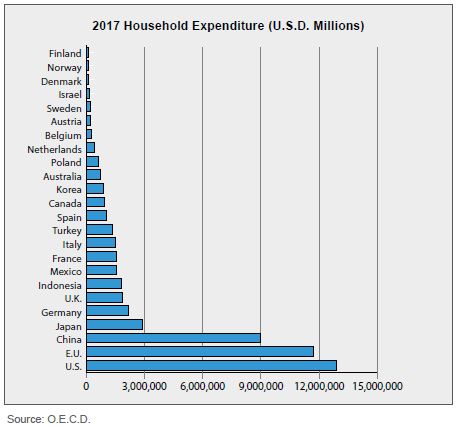 Digital consumers and producers are often not the same country. The graph below shows shares of value added from the national accounts of O.E.C.D. Member States via information and communications activity. Where most digital business is classified though, efforts to better measure the digital economy are currently underway. Relatively high value-added shares are reported by Ireland, Sweden, the U.K., Finland, and Estonia; lower shares are reported by three of the five states with D.S.T.'s. 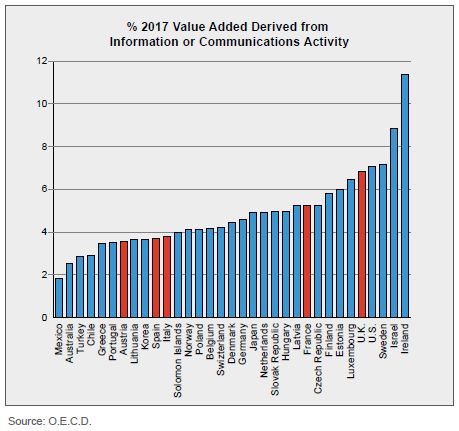 Like other policy questions, jobs play a critical role. The measure of value added for the digital economy may be somewhat murky when we consider output measurement methods, but counting employed people is relatively uncomplicated. Using 2015 B.E.P.S. Action data that do not account for the considerable increase in activity in online platform, app, and gaming development over the last four years, we can see from the graph below that the digital economy participants based in high-employment countries have more to lose from an expanded nexus standard and a tax imposed on sales by the country in which users or subscribers reside. We should, therefore, expect a different policy approach from, for example, Finland, Sweden, and Ireland than from Spain, France, Italy, Austria, and Portugal. The U.K. is the outlier here, as it imposes a D.S.T. and rates high in I.C.T. employment. 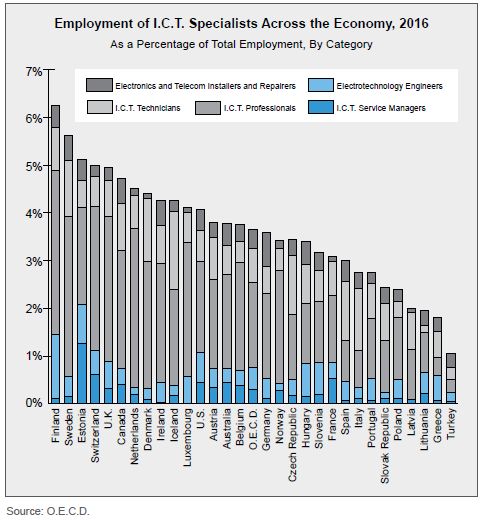 Informal support for this idea comes from a quick scan of the labor market for software developers. In addition to serving as a resource that contributes to the expansion of the home-country tech industry, skilled developers are also hired by foreign companies that incorporate subsidiaries where skilled people live. A TechRepublic review1 used the Diffbot Knowledge Graph A.I. and 2.5 million records of identified skills to rank the best E.U. locations with developer talent. The resulting ranking of countries was as follows:

This list generally supports the idea that we should see companies and governments with top-five rankings dissenting or urging caution over unintended policy consequences of the Unified Approach. At the same time, lower ranked countries should be more willing to make trade-offs between corporate tax collections from companies exploiting their markets without establishing a physical presence and the fiscal effects of lost jobs or less tech company investment in local skilled labor. Migration of skilled labor within the E.U. from low-ranked countries to high-ranked countries should be relatively less of a policy concern in low-ranked countries.

Not all tech companies submitted written comments to the O.E.C.D. on the Unified Approach proposal. European company commentators were generally located in countries where tech employment and investment are expanding and generally not in countries that might be thought of as net consumers or providers of personal data used to train the Google and Facebook prediction machines.

Part of the algebra of the Unified Approach involves a routine return to a digital permanent establishment in a market country and consolidated non-routine accounting profit attributable to consumer-country market intangibles. Spotify and other commentators noted the potential cash flow hardship that this approach might cause for digital economy participants either in startup mode or with substantial losses from early research and development ("R&D") activity. Others suggested measuring group profit after interest expense, highlighting the need for final financial transactions pricing guidance from the O.E.C.D. to encourage consensus or to better measure the economic impact of the Unified Approach as proposed. Taxing notional profit before a net return to intangible asset development is achieved at a consolidated level. This is viewed to significantly distort the expectations of founders and investors in startup companies. The concern is magnified by the O.E.C.D. proposal to collect tax on the allocated residual profit through a withholding mechanism in cases where sales are made directly to customers, as a withholding tax may bias consumer choices between alternative digital products. These appear to be valid and practical concerns in regions where tech entrepreneurs and venture capitalists are resident.

The general principle of "value creation" in consumer markets is questioned by several commentators, and Spotify indicates that its value creation activities occurred and continue to occur within R&D teams in Sweden and the U.S. Likewise, Finnish game developer Supercell attributes more than 90% of its value creation to innovation that occurs in game studios. This ongoing vague yet crucial term may continue to perpetuate the differing policy views of tech maker and consumer groups and governments.

Other commentators, noting the complexity of the Unified Approach, advocate for expansion of a well-functioning E.U. value-added tax ("V.A.T.") system and a more detailed review of V.A.T. rates. This offering is not likely to satisfy the political imperative in many E.U. market countries with developed V.A.T. regimes. These comments highlight the trade off in the current policy debate between the complexity required to achieve the political objective and the more mundane public finance concern of raising tax revenue at a suitable level while minimizing the cost of administration.

High global consolidated revenue can be earned in high-growth tech companies with a relatively little in-house tax capability. A number of commentators pointed out the significant difference between the compliance capabilities and resources of very large multinational tech companies and high-growth, high-revenue multinational tech companies when considering the cost of complying with the new proposed nexus and profit allocation standard. In addition to the obvious concerns about double tax dispute resolution, this is again a practical problem that approaches the core requirement of earnings and cashflow forecasting for growing companies and their shareholders.

It would also appear as though there are clear views on the level of routine profit in a tech producer jurisdiction that are structurally higher than the consensus view in tech consumer jurisdictions. All signs point to this being an item of contention in an era of continued low interest rates, demanding principled O.E.C.D. guidance rather than G-20 political calculus.

The allocation of non-routine profit by jurisdiction according to sales, as has been proposed, will likely involve the collection and storage of personal data of consumers in B2C businesses. The irony of this data privacy conundrum is not lost on several commentators.

Finally, while many industry commentators argue that their industry should be exempted from the proposed standards, tech industry commentators point out that greater prevalence of Internet of Things and Artificial Intelligence technologies in products and services traditionally considered "bricks and mortar" or B2B involve collecting consumer satisfaction or behavioral data. This continued evolution of corporate business models requires the O.E.C.D. definition of a "consumer facing" business to be both clear and robust to technological development. Some commentators as a result called for partial adoption of the Unified Approach with more investigation to precede a full policy adoption, while others favor making aspects of the policy subject to opt-in or country tax authority discretion.

People may disagree on tax policy for the digital economy, but they will likely find common ground and agree that the recent policy environment in the U.K. has been beset by extraordinary uncertainty of historical proportions. The comments from U.K. tech organizations, which operate in a country of both makers and users of digital technology and have felt the first waves of D.S.T., were particularly interesting, as expected.

The industry association techUK advocated for a globally coordinated approach with fewer exemptions for small companies and carveouts for particular business sectors. Specific mention was made of the rapidly evolving fin-tech sector as an industry to which the rules should apply, thereby narrowing the exemption or carveout for financial institutions. With knowledge of the compliance burden imposed by the U.K. D.S.T., techUK advocated, like many other commentators from Northern Europe, for a single regulator or compliance body. This concept, known as the "one-stop shop," is an alternative to the compliance mechanism introduced by B.E.P.S. Action 13 to manage Country-by-Country Reporting data collection that mimics many of the attributes of the E.U. V.A.T. mini one stop shop ("M.O.S.S.").

It was pointed out that measurement problems relevant to the location of customers or consumers that were familiar at the time of the H.M.R.C. D.S.T. consultations have returned to the discussion of the Unified Approach. Data privacy, consumer use of virtual private networks that obscure location, and the systemic shortage of consumer data that would inform the division of non-routine profit were cited as practical problems that must be overcome to achieve an administrable global system that results in minimal dispute between treaty partners.

Commentary from the retail industry represented by the British Retail Council had a different perspective on the digital economy than the tech industry, firmly situating itself as a retailer of goods as opposed to a consumer-facing business under the Unified Approach. Like other tech industry commentators, the retail industry views sales taxes or consumption taxes as the appropriate policy response.

The extent and depth of industry commentary should provide a well-rounded view of the key policy questions as the O.E.C.D. shepherds its tax administration flocks toward consensus.