Seyfarth Synopsis:  On December 5, 2018, the New Jersey State Assembly introduced legislation aimed at gradually increasing the minimum wage in New Jersey up to $15.00 an hour over the next five years.  The Bill was soon approved by both houses of the Legislature on January 31, 2019. On February 4, 2019, Governor Phil Murphy signed the Bill into law, amending the existing Minimum Wage laws and thrusting New Jersey into the scene of a larger national movement aimed at increasing the minimum wage for non-exempt workers to $15 an hour.

Last month, New Jersey State Assembly Speaker Craig Coughlin introduced a Bill seeking to increase the minimum wage to $15.00 per hour by 2024 for most employees working in the State of New Jersey. The Bill, as signed by the Governor, amends and supplements the New Jersey State Wage and Hour Law.  In a statement, Speaker Coughlin praised the bill: "This bill addresses the issue of helping New Jersey's working poor be better able to afford living in the State while taking into consideration the concerns of the State's valued small business community."

The newly amended law is one of a number of initiatives being undertaken by the Democrat legislature and Democrat Governor to address their perceived need to establish a much higher floor of workplace minimums and protections for all New Jersey workers.

The new requirements are best captured in a simple chart, with explanatory comments to follow: 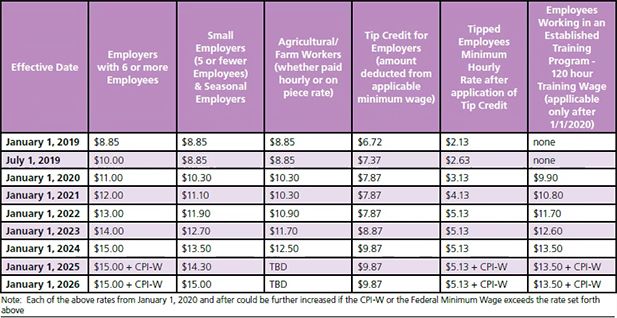 The legislation establishes a "training wage", such that "beginning on January 1, 2020, workers enrolled in a qualified training program would begin to be paid a "training wage" equal to at least 90 percent of the minimum wage at the time, for up to the employee's first 120 hours.  Importantly, this rate may only be used where the employer utilizes "an established employer on the job or other training program" meeting certain standards, where the trainee does not displace another employee, and where it is the employer's intent at the time of hire to retain the employee beyond the training period.

"Seasonal Employment" under the new legislation is defined as employment by an employer that is a Seasonal Employer or employment by a non-profit or government entity of an individual who is not employed by that employer outside of the period of May 1 and ending September 1, or employment by a governmental entity in a  recreational program or service between May 1 and September 30.  A Seasonal Employer is an employer who exclusively provides its services for not more than 10 weeks during June, July, August and September, or an employer for which, during the immediately previous calendar year, "not less than two thirds of the employer's gross receipts were received in a continuous period of not more than sixteen weeks" or an employer "for which not less than 75 percent of the wages paid by the employer during the immediately preceding year were paid for work performed during a single calendar quarter."

A small employer is defined as "an employer that employed less than six employees for every working day during a majority of the calendar year."

The lower agricultural or farm rate is limited to employees who work on an hourly or piece rate on a farm.

The legislation provides that full-time students who are employed by their college or university at which they are enrolled are entitled to a wage equaling at least 85% of the effective applicable minimum wage rate for that year.  The law, however, specifically exempts from its scope: part-time in-home babysitters, persons under 18 working without a vocational certification, outside salesman, automobile salesman, and non-profit or religious volunteers participating in county or agricultural fairs.

New Jersey's current minimum wage rate increased to $8.85 as of January 1, 2019, which arose from from a 2013 constitutional amendment that raised the rate from $7.25 to $8.25, to be raised thereafter according to inflation.  The new requirements were promoted as providing for a "gradual increase" in minimums, although many employers are reluctant to describe it that way.

In August 2016, former New Jersey Governor Chris Christie vetoed a similar bill which would have increased the State's minimum wage to $10.10 an hour, and up to $15 an hour over five years. Senate Bill 15 had passed the Senate 21-18 and the Assembly 42-31 but was vetoed by the Republican Governor at the time.

This Bill swiftly made its way through the State Legislature, and was sent to Governor Phil Murphy for his signature last week.  The law is written to take effect immediately, but the increases will be phased in under the timeline outlined in the legislation and described above.

Employers in New Jersey should be on alert given these impending and inevitable wage increases, and should be reviewing their wage practices for compliance in advance of the first phase-in date for the increases, scheduled for July 1, 2019.