by Vanessa Ganguin
Littler Mendelson
Your LinkedIn Connections
with the authors

We outline below answers to some frequently asked questions about the UK's new immigration system.

Q1: What do employers need to know about the UK's new post-Brexit immigration system?

In order to bring new arrivals from the European Economic Area (EEA) after Brexit under the same visa regime as the rest of the world, UK Visas & Immigration (UKVI) launched its new Points-Based System for UK immigration on 1 December 2020.

So what options do employers have for bringing people to work in the UK under the new system?

Q2: Does everyone need a visa?

Certain nationalities can come to the UK as visitors without a visa but others need to obtain a visa in advance of arriving. People coming to the UK for short periods as visitors can undertake some permitted activities, such as attending meetings or conferences. Generally, visitors are not permitted to carry out productive work or provide services while in the UK, with some very specific exceptions (for instance, an employee of a foreign manufacturer may install, repair or advise on computer software purchased or leased by a UK company).

Q3: Do employers need to sponsor the visa?

Although some people will have other visa options available which allow them to work (see below), most migrants will need to be sponsored in order to apply for a work visa. The sponsor must be an organisation established in the UK which has been authorised by UKVI to sponsor migrant workers in the relevant category.

Those wishing to sponsor migrant workers who don't have a licence will need to apply for one. UKVI is currently processing new licence applications within about eight weeks (and more quickly where priority processing is granted). Employers should note that there is a significant compliance element to becoming a licensed sponsor.

Q4: What types of sponsorship are available to employers?

The sponsorship system covers a number of different visa categories.

In order to sponsor a migrant worker within a specific category, an organisation needs to hold a licence for that category. Where categories have changed, licences held under the old categories automatically changed to the new ones in December 2020. Organisations can apply to add other tiers to an existing licence.

Most of these categories existed under the old Points-Based System and still operate in largely the same way. However there have been significant changes to the Skilled Worker category.

Q5: What has changed with the Skilled Worker category?

There are five major difference between the old Tier 2 (General) category and the new Skilled Worker category which has replaced it.

All of the above changes are designed to make it easier and quicker for employers to sponsor visas in order to address the shortages expected to be caused by the end of free movement from the EEA and Switzerland.

However, there are still strict requirements to which employers will need to adhere in order to sponsor migrant workers.

Q6: What are the new minimum requirements for sponsoring a Skilled Worker?

Skilled Workers now need to score a minimum of 70 points in order to qualify for sponsorship. These are broken down into 50 mandatory points and 20 tradeable points. 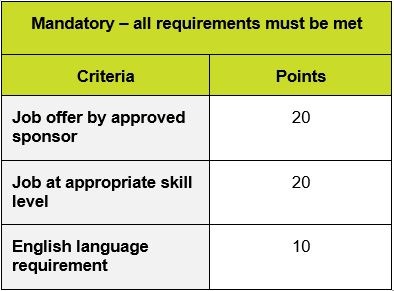 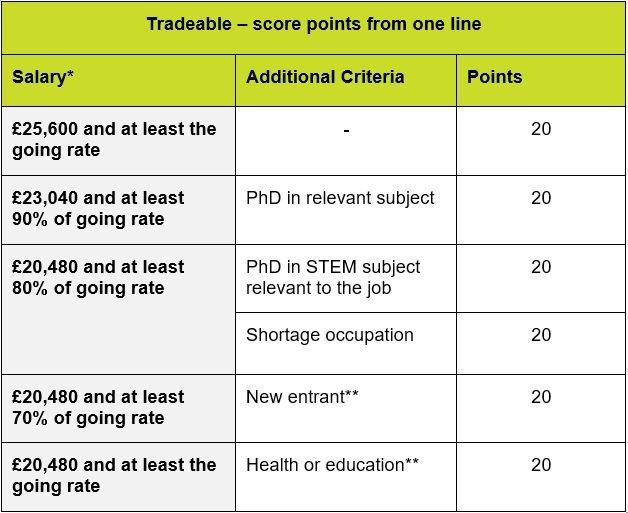 *Salary no longer includes any allowances and must exceed the minimum threshold and relevant percentage of the going rate in the rules for the specific role.

**New entrants include those under 26, specific postdoctoral roles, those working towards recognised professional qualifications or chartered status and students who have recently completed (or are about to complete) certain UK courses of degree level or above.

Sponsors should note that large parts of the Skilled Worker category continue to operate as before, including the need to comply with record keeping and reporting duties and the "genuine vacancy" requirement. The sponsor guidance was updated in December 2020 and sponsors should make sure that they are familiar with the current version.

Q7: Can those on other visas be employed without sponsoring them?

Those with permission in the following categories will not have conditions restricting who they can work for, unless otherwise indicated below.

There is also an Innovator category for people establishing a business in the UK, but these migrants are only allowed to work for their own business – they cannot work directly for other employers in the UK. The same restriction applies to Turkish citizens with ECAA Business Person status.

ARTICLE TAGS
UK Immigration General Immigration Work Visas
POPULAR ARTICLES ON: Immigration from UK
Immigration And Global Mobility Update / April 2021
lus Laboris
Every 2 months, our experts from around the world put together an Update on the law on immigration & global mobility, setting out recent changes to the law. See our Update for April 2021...
Home Office Publishes Changes To The Immigration Rules
Stevens & Bolton
On 4 March 2021, the Home Office published a Statement of Changes to the Immigration Rules detailing changes that will take effect on 6 April 2021 (unless otherwise specified).
Updated Home Office Guidance Published As To What Evidence Of Recruitment Must Be Kept When Sponsoring Skilled Workers
Stevens & Bolton
Certain rules around sponsoring individuals were relaxed when the new immigration system came into force on 1 December 2020. Previously, in many cases the employer had to advertise the vacancy in a very specific way...
Fee Waivers In Immigration Applications
Latitude Law
Immigration fees have risen sharply in the past few years. Demand for immigration fee waivers is also on the up; but who qualifies and what does the Home Office guidance say?
Priority Processing Again Made Available In UK
Envoy Global, Inc.
Priority Processing is now available again for certain visa types when filed from within the U.K., and other priority processing is now available for certain consulates when applying from outside...
Home Office Publishes New Guidance On Right To Work Checks For European Nationals
Stevens & Bolton
Free movement under EU law ended on 31 December 2020 and there are now different immigration rules applicable to EU, EEA and Swiss nationals (European nationals) depending on whether the European...
FREE News Alerts
Sign Up for our free News Alerts - All the latest articles on your chosen topics condensed into a free bi-weekly email.
Register For News Alerts
Article Tags
UK Immigration General Immigration Work Visas
Related Articles
Do You Want To Spend More Than 90 Days In Your Spanish Property This Summer? Giambrone & Partners
Fee Waivers In Immigration Applications Latitude Law
Immigration And Global Mobility Update / April 2021 lus Laboris
Priority Processing Again Made Available In UK Envoy Global, Inc.
UK Graduate Route To Provide Post-Study Work Opportunities For International Graduate Students Envoy Global, Inc.
Mondaq Webinars
Future Series: The Evolving Role of General Counsel in ESG Strategy
Bennett Jones LLP
Webinar Calgary Canada
Financial Services and Tourism Investment Opportunities in the Turks and Caicos Islands
Invest Turks And Caicos
Webinar Providenciales Turks and Caicos Islands
More Webinars
Comparative Guides
Anti-Corruption & Bribery
Artificial Intelligence
Banking Regulation
Blockchain
Cartels
Mondaq Advice Centres
UK
Coming to and Investing in the UK
Global
Trademarks in SAARC Countries
Global
Investment Immigration
More MACs
Upcoming Events
Mondaq Social Media