Banky's EU Trade Mark Registration (EUTM) for the "Flower Thrower" has been invalidated by the EUIPO on the ground that it was filed in bad faith.

The "Flower Thrower" was originally painted by Banksy on a wall in Jerusalem in 2005, and it is one of his most iconic and most recognised works.

In 2014 Pest Control Office Limited (PCO), the company through which Banksy operates, registered the trade mark below, which represents the "Flower Thrower" work, as an EUTM: 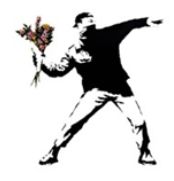 In March 2019 Full Colour Black Limited (FCB), a UK company that sells greeting cards that reproduce Banky's works, filed an application to cancel the EUTM on the grounds that it was filed in bad faith and that it was non-distinctive.

The EUIPO issued its decision on 14 September 2020, holding that the EUTM is invalid in its entirety on the ground that it was filed in bad faith.

The SkyKick decision (C-371/18 29/01/2020) confirmed that a trade mark registration can be deemed to have been filed in bad faith in circumstances where the proprietor had no intention to use the trade mark if:

-the applicant filed the application with the intention of undermining, in a manner inconsistent with honest practices, the interests of third parties; or

In this instance, it was clear to the EUIPO that PCO had filed the application in bad faith.

Banksy would arguably struggle to enforce any copyright to prevent commercial reproductions of his works without identifying himself as the author of those works, and thus disclosing his persona. Furthermore, he may not be in a position to enjoy copyright protection in any case given the potentially illegal nature of acts of graffiti. Therefore, the EUIPO held that the purpose of filing the EUTM was purely an avenue for gaining some protection over a work of art in relation to which Banksy did not wish to enforce or could not enforce copyright. It was not, according to the EUIPO, filed with the intention of obtaining an exclusive right within the normal functions of a trade mark registration. The purpose of a trade mark registration is to enable the proprietor to protect signs for goods and services that consumers identify with that proprietor alone. In this case, the evidence reflected that Banksy had not sold or provided any goods or services under the EUTM or even attempted to create a market for such goods and services. The evidence showed that neither Banksy nor PCO were using the "Flower Thrower" as a trade mark at the time of filing and indeed had no intention of doing so until the cancellation application was filed. In October 2019, Banksy set up a physical store called Gross Domestic Product, which sold a range of goods to which his works had been applied, including the "Flower Thrower". However, the launch of the store was expressly referred to by Banksy as a reaction to the application to cancel the EUTM. The EUIPO held that this use was only to circumvent the law rather than to seek to use the EUTM to commercialise the goods in question.

This decision provides a useful summary of the SkyKick decision insofar as it relates to intention to use bad faith applications. It is also of specific interest to artists who have sought to protect representations of their works as trade marks. Unless there is an intention to use those trade marks in relation to the goods and services claimed in a trade mark registration, then there is clearly scope for them to be unenforceable and subject to cancellation. Thus, it would be sensible for artists to retain evidence of how they plan to commercialise, or have commercialised, goods and services using representations of their works as trade marks, as such evidence would be valuable in defending a cancellation action.

The decision to cancel the "Flower Thrower" registration can be appealed, so it is possible that Banksy and his representative make take a decision to do that. If no appeal is filed, or if an appeal is refused, then on the face of it any other registrations that PCO owns for Banksy's works may also be under threat if they have been filed for the same reasons.

ARTICLE TAGS
UK Intellectual Property Trademark
POPULAR ARTICLES ON: Intellectual Property from UK
How Quickly Can A European Patent Be Granted?
Adamson Jones IP Ltd
If you are looking to obtain a European patent, there are a number of factors that affect the time it takes to be granted.
What Does The Expiry Of The Brexit Transition Period Mean For Your IP Rights?
Adamson Jones IP Ltd
The UK left the European Union on 31 January 2020, although many of the effects of this have been suspended during the Brexit transition period of the withdrawal agreement, which is set to expire on 31 December 2020.
How To Prove 'Passing Off'
Gowling WLG
'Passing off' does not have a statutory basis and doesn't need to be registered to be effective.
How To Get Your Patent Application Claims Ready For Europe?
Adamson Jones IP Ltd
One of the biggest issues faced by PCT patent applications entering Europe is the structure of the patent application claims.
Pros And Cons Of Using The European Patent Application System Rather Than Separate National Patent Applications?
Adamson Jones IP Ltd
Since its establishment in the 1970s, the European Patent Office (EPO) has become the standard choice for obtaining patent protection across Europe.
A Review Of UK Patent Cases In 2020 (Video)
Gowling WLG
Gordon Harris gives his annual review and summary of 2020's important patent cases. Alex Brodie and Michael Carter join him to deliver the statistics, ...
FREE News Alerts
Sign Up for our free News Alerts - All the latest articles on your chosen topics condensed into a free bi-weekly email.
Register For News Alerts
Article Tags
UK Intellectual Property Trademark
Related Articles
Review Of EPO Parameter Decisions In 2020 J A Kemp LLP
UKIPO Delivers On Its Promise To Owners Of EU Trade Marks And Registered Community Designs Ashfords LLP
High Court Judgment Highlights Importance Of Professional Representation J A Kemp LLP
Important Changes To Your EU Trademark And Design Rights From 1st January 2021 Acuity Law
Developing And Patenting ‘green' Chemical Innovation: Drivers, Trends, Considerations, Growth Areas Appleyard Lees
Mondaq Webinars
International Arbitration and Cyprus
Patrikios Pavlou & Associates
Webinar Limassol Cyprus
International Transfer Pricing Trends from a Swiss Perspective - Practical Tips and Lessons Learned
Tax Partner AG
Webinar Zurich Switzerland
More Webinars
Comparative Guides
Anti-Corruption & Bribery
Banking Regulation
Blockchain
Cartels
Corporate Tax
Mondaq Advice Centres
UK
Coming to and Investing in the UK
Global
Trademarks in SAARC Countries
Global
Investment Immigration
More MACs
Upcoming Events
Claim Scope and Sufficiency: When Does a Broad Claim Fall for Insufficiency?
J A Kemp LLP
Webinar London UK
Patenting Antibody Pharmaceuticals At The EPO
J A Kemp LLP
Webinar London UK
Mondaq Social Media