by Charlie Bond
Gowling WLG
Your LinkedIn Connections
with the authors

To register a trade mark, there are various criteria that need to be met. In this podcast, Charlie Bond goes through the basics of trade marks, with a focus on UK law and procedure, discussing what makes a good trade mark and what remedies can be claimed against an infringer. 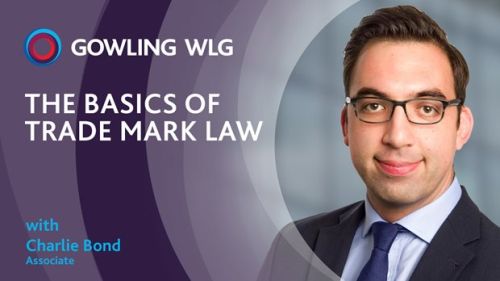 Hi, my name is Charlie Bond, and I am an associate in the intellectual property team at Gowling WLG. In this podcast I will be going through the basics of trade marks, with a focus on UK law and procedure. I will be covering:

So the first question I'll cover is:

What is a trade mark?

The UK trade mark regime is predominantly governed by the Trade Marks Act 1994, and is largely harmonised the EU trade mark law. Section 1 of this Act defines a trade mark as:

"any sign capable of being represented graphically which is capable of distinguishing goods or services of one undertaking from those of other undertakings."

To break this definition down, a trade mark must be:

1. A sign - This generally has a broad meaning, and includes:

As an example, an attempt was made to register the Scrabble tile as a trade mark, but it was deemed to not be 'a sign' because the application was for a single tile that could have any letter and number on it. The application therefore lacked precision and was refused.

So how do you get a trade mark?

There are three options when it comes to applying to register a trade mark:

Any natural or legal person can make the application, even if they are not based in the UK, provided they have a UK address for service.

The application itself consists of a quite basic form in which the key information is the representation of the trade mark being applied for and the goods and services for which registration is sought.

Once the application has been filed, the UKIPO will perform an examination to check that it complies with its formal requirements and that it does not fall foul of the absolute grounds to refuse applications, which I will discuss later in this podcast. The UKIPO will also search for earlier registered trade marks that conflict with the application, which the applicant will then have an opportunity to argue against.

Assuming the application gets through the examination phase, it will then be published online by the UK Trade Marks Journal. Third parties then have two months to object to the application. Any third party can object based on the absolute grounds, but only third parties owning earlier rights can oppose based on the relative grounds, both of which will be discussed later in this podcast.

The process for applying to register an EU trade mark is very similar to that for a UK trade mark. However, there are some specific points of difference to note:

Details of the trade mark are then forwarded to each relevant national intellectual property office who will follow their own national procedure, at the conclusion of which they will either register or refuse the application in accordance with the applicable laws of that country.

The main advantages of this system are similar to that of the EU trade mark system, being that there is a single application filed in one office with one fee resulting in one registration with one number and a single renewal date. In addition, the geographical scope of protection is broader than the EU trade mark system, with 97 countries currently signed up to this protocol.

In terms of when you should apply to register a trade mark, ideally this should be at an early stage in the development of a business so that the brand is protected from the outset. The application process also means if the brand overlaps with a competitor this will likely come to light and you can make a decision on whether a rebrand is necessary before too much time and money has been spent building the brand.

What can and cannot be registered as a trade mark

To register a trade mark it must not fall into either the absolute or relative grounds for refusing a trade mark application.

The absolute grounds for refusal are:

The latter three grounds for refusal can all be overcome if the applicant proves that the trade mark has acquired distinctiveness, which in essence means proving the public associates the mark with you, despite it being generic, descriptive or devoid of distinctive character. For example, the slogan 'compare the market' was devoid of distinctive character, but it was proven that it had acquired distinctiveness and therefore was a valid trade mark.

Examples of trade marks that have encountered these restrictions are:

There are additional less common absolute grounds for refusal including using a trade mark that is misleading or offensive. There are also specific restrictions on shape track marks that are designed to avoid the de facto extension of the life of, for example, a patent by allowing the same product to be protected as a trade mark. For example, where the shape of a product gives it substantial value, it will not be protected as a trade mark because design law is more appropriate. I will not be going into detail on these exceptions because they are significantly less common than those already discussed, and are also sufficiently complex that they could form the subject of their own podcast.

The relative grounds for refusal, which as mentioned earlier can only be raised by parties with existing rights, are:

The two relevant marks will be compared to see if the overall impression they have on the average consumer differs. In particular, account will be taken of the aural, visual and conceptual similarities of the trade marks. They will be deemed identical if they differ only in insignificant ways that the average consumer wouldn't notice. For example, the insertion of a hyphen to the trade mark WEBSPHERE did not prevent the two marks being identical.

When comparing the goods and/or services for which the marks are used and deciding whether they are identical or similar, the relevant consumers will be compared as well as the actual use of the marks and the relevant trade channels, as well as many other factors.

It is therefore quite a rigorous process assessing whether a trade mark application falls within the relative grounds for refusal.

What makes a good trade mark?

There are no hard and fast rules on this, hence there being such a large amount of case law where the registrability and validity of trade marks has been examined. However, there are some basic rules to follow.

Acts which constitute use of a sign in the course of trade include:

A party accused of infringement has a variety of defences available to them. The primary option is to challenge the validity of the patent (so, for example, arguing that the trade mark should not have been registered because it lacks distinctiveness), but there are other narrower options such as arguing that the infringing sign is the third party's own name and so cannot infringe.

As a slight side note, a third party has a general right to apply to revoke a registered trade mark if:

Returning to trade mark infringement, if a trade mark owner is successful in proving its registered mark has been infringed then it is entitled to seek certain remedies which include damages in respect of its loss (or alternatively an account of the profit the infringer has made), an injunction preventing further infringing use, erasure, removal or obliteration of the offending sign from any goods, materials or articles on which it appears, or if this is not possible then the destruction of the relevant goods, materials or articles.

The obvious first step to take is registering the trademark that you use or intend to use. If the business is not yet up and running, or this is part of a re-brand, it is worth doing clearance searches before filing an application. This will ensure there are no conflicts with existing brands. This is important for two reasons:

To wrap up, this podcast has provided an overview of the core principles of trade marks and how they can be exploited. Trade mark law is incredibly complex and is full of idiosyncrasies, so anyone that is seeking to register, exploit or enforce a brand should seriously consider seeking legal advice at an early stage.

Thank you for listening.