UK: The Chocolate Wars (Part II) And The Taxi Wars

by Andrew Hawley
Marks & Clerk
Your LinkedIn Connections
with the authors

The chocolate confectionary market is arguably one of the most competitive within the UK. There are many different types, flavours and shapes of chocolate for us to enjoy, which are sold under numerous well-known household brands. However, although many of these brands are well known, are the chocolate bars themselves? Is it possible for a chocolate bar to be instantly recognisable and distinctive purely thanks to its shape alone, irrespective of any other branding?

The issue regarding whether the actual shape (alone) of a chocolate product is sufficient to identify the product to the relevant consumer was decided in the English High Court in the on-going Nestlé v Cadbury saga (referred back to the English Courts, with questions, by the Court of Justice of the European Union last year). This case specifically dealt with the question over whether Nestlé should be entitled to enjoy exclusive trade mark rights for the shape of its KitKat trade mark in the UK.

In summary, Nestlé sought to register its well known four finger shape, minus the KitKat logo, which is usually embossed on each finger and the packaging, as a trade mark in the UK for various goods in class 30, including chocolate products, chocolate confectionery, pastries, cakes and biscuits.

Rivals Cadbury successfully opposed this application on the basis that the shape of the KitKat mark was a feature of the nature of the goods and that it was necessary to achieve a technical result (to allow the consumer to easily break the bar). In the opposition proceedings, Nestlé filed evidence that the KitKat shape had acquired a distinctive character due to the use made of it in the UK which allowed the consumer to identify the product as a "KitKat" without any additional packaging or branding (which, if successful, would have allowed Nestle to successfully resist the opposition).

Nestlé appealed the decision to the English High Court and Mr Justice Arnold stayed the appeal proceedings pending a ruling from the CJEU on how acquired distinctiveness is to be assessed in relation to trade mark applications for shape marks. The following specific questions were raised:

The judgement of CJEU in relation to the specific questions raised by Mr. Justice Arnold can be summarised as follows:

This decision appears to confirm the feeling that the courts are usually reluctant to allow manufacturers to obtain a monopoly (through a trade mark registration) for shape marks alone. Although the decision reinforces the opinion that consumers tend to be influenced by branding and packaging rather than the shape of the product alone, it must be noted that obtaining trade mark registration in the UK for a shape mark alone is not impossible (as the successful registrations for the Toblerone bar and Nestlé's own Walnut Whip will testify).

The question of whether a shape mark alone is inherently distinctive was also the primary issue in the recent case of London Taxi Company v Frazer-Nash.

In this case, LTC claimed that Frazer-Nash had intentionally copied the shape of its iconic "London black cab" and that the new "Metrocab" of Frazer-Nash was specifically designed to deceive both the London public and existing taxi drivers into thinking that this was and LTC taxi. As a result, LTC launched both trade mark infringement and passing off action in the UK courts based on its registered and unregistered rights in the shape of its "black cab".

Below is an image of the respective taxis in question, with the Frazer-Nash "Metrocab" on the left and the LTC "black cab" on the right: 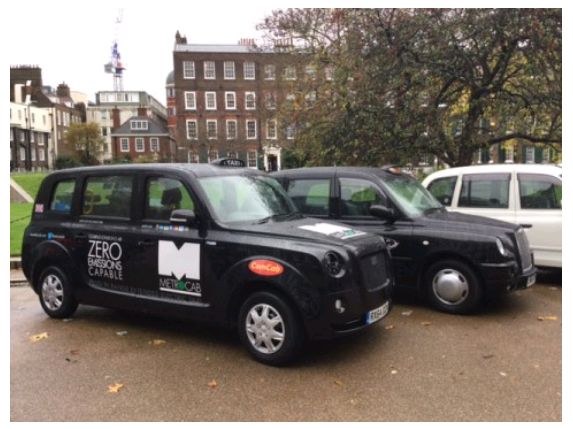 In this case, Mr. Justice Arnold rejected all of the arguments by LTC and dismissed the infringement claims on a number of grounds, including that the shape marks (of the taxi) adds substantial value to the goods, one of the shape marks had not been put to genuine use in the UK for at least five years and that Frazer-Nash had not taken unfair advantage of LTC's registered trademarks.

Mr Justice Arnold also stated that the shape marks owned by LTC should not have been registered as they lack the required level of distinctiveness (being merely the shape of a taxi) and that they had not acquired a distinctive character through use of the marks. He also applied his reasoning in the recent KitKat case in that consumers did not use or identify the LTC taxi because of its shape, rather due to other branding such as the prominent "LTC" badge. Also, the may associate the shape of the taxi as originating from LTC, but this mere association is not enough as further branding is needed to fully allow the consumer to determine that the taxi originates from LTC and to distinguish their taxi from other such goods.

With regards to the passing off action, Mr Justice Arnold reaffirmed that it is very difficult to establish the necessary goodwill in a shape and that, in this instance, LTC had failed to show that the shape of their taxis had acquired a distinctive character which allowed the public to easily identify the overall shape as being an LTC taxi. As such, no goodwill could possibly accrue in the shape itself.

Mr Justice Arnold also commented that there was also no evidence of misrepresentation as Frazer-Nash had not intended to deceive the relevant consumer into thinking that its "Metrocab" came from the same source as the LTC taxis.

This decision reinforces the opinion that obtaining registered rights in shape marks, and enforcing such rights against third parties, remains highly problematic in the UK unless it can be shown that the shape itself has acquired a substantial level of distinctiveness through use which is not due to an association with any other branding on the goods in question.

ARTICLE TAGS
UK Intellectual Property Trademark Litigation, Mediation & Arbitration Trials & Appeals & Compensation
POPULAR ARTICLES ON: Intellectual Property from UK
In Good Spirits: Supporting Scotland's Whisky
Marks & Clerk
From northern Alaska to sprawling Shanghai, ask a local to name something Scottish and you might expect a few things.
Distinctly Different? Trade Marks And The Standards For Distinctiveness
Gowling WLG
The growth of the online world has meant that many brands which previously would have been accessible by and promoted to a section of society are now available to the world.
Innovation In Aquaculture
Marks & Clerk
Aquaculture is the farming of fish, crustaceans, molluscs, aquatic plants, algae and other organisms and Scotland has a long and respected history in this regard.
The New Regime For Trade Mark And Design Protection In The UK And Europe
J A Kemp LLP
The UK withdrew from the EU (Brexit) on 31 January 2020, and the transition period ended on 31 December 2020. The UK is no longer subject to EU law...
Brexit: We Have It Covered
Haseltine Lake Kempner LLP
The UK's departure from the European Union may, on the face of it, have had an impact on certain IP rights and on how particular work is handled...
The Difference Between Trade Marks, Patents, Copyright And Designs
Dehns
The term intellectual property (IP) refers to a variety of different types of legal rights.
FREE News Alerts
Sign Up for our free News Alerts - All the latest articles on your chosen topics condensed into a free bi-weekly email.
Register For News Alerts
Article Tags
UK Intellectual Property Trademark Litigation, Mediation & Arbitration Trials & Appeals & Compensation
Similar Articles
Powered by mondaq AI
MATCH
43%
What Does Brexit Mean For You And Your Trade Marks? Walker Morris
45%
The Foundation For The Protection Of The Traditional Cheese Of Cyprus Named Halloumi vs Babel Sajt Kft Marks & Clerk
48%
Oatly AB's Trade Mark IT'S LIKE MILK BUT MADE FOR HUMANS Refused Registration By The EU Trade Mark Office Marks & Clerk
49%
Local Spirits Company Successfully Defend Their Rights In Loch Ness Trade Marks Marks & Clerk
42%
What Does Brexit Mean For You And Your Trade Marks? Walker Morris
Related Articles
The Patent Bar And Beyond – From Holding Court, To Heading The Classroom, In An IP Career Spanning 40 Years: In Conversation With Sir Robin Jacob Gowling WLG
Ferrari Drives Forward The Law On Genuine Use Of A Trade Mark Ashfords LLP
A Fabric Design Has Been Found To Be A Work Of Artistic Craftsmanship: Will Response Clothing Cause A Shift In How UK Copyright Is Assessed? Bristows
Podcast On Developments Relating To Component-level SEP Licensing Bristows
Is Your Brand Veganu-ready For 2021? Marks & Clerk
Mondaq Webinars
Merger Control Trends in Turkish Competition Law
ELIG Gürkaynak Attorneys-at-Law
Webinar Istanbul Turkey
Employment Law: Challenges that Lie Ahead for UK Employers in 2021
Stewarts
Webinar London UK
More Webinars
Comparative Guides
Anti-Corruption & Bribery
Banking Regulation
Blockchain
Cartels
Corporate Tax
Mondaq Advice Centres
UK
Coming to and Investing in the UK
Global
Trademarks in SAARC Countries
Global
Investment Immigration
More MACs
Upcoming Events
Gowling WLG Annual Patents Review
Gowling WLG
Webinar London UK
SPCs – Update On Recent Political And Legal Developments
J A Kemp LLP
Webinar London UK
Mondaq Social Media