UK: This Is Not Just Any Caterpillar…

It would have been difficult to miss the recent news that Marks & Spencer has filed trade mark infringement proceedings against German discounter Aldi's Cuthbert the Caterpillar cake. The filing became the top trending topic on Twitter within days and has sparked much debate online.

M&S's Colin the Caterpillar is not the only caterpillar themed cake on the market, with a number of other supermarkets having their own versions, including Waitrose's Cecil, Sainsbury's Wiggles, Asda's Clyde and Tesco's Curly.

M&S own UK trade mark registrations that cover the name "COLIN THE CATERPILLAR" as well the packaging of the product. It is very likely that the claims will have included passing-off to cover the appearance of the cake itself, originating from the goodwill associated with the product. In order to succeed under this ground, M&S will need to show that Aldi's Cuthbert offering damages, or has the potential to damage that goodwill by misrepresenting Cuthbert as Colin.

Aldi, as with many of the supermarket own brands, are no stranger to well-known "dupes" and have often found themselves having claims filed against them. Most recently was the 'battle' played out on social media with Brewdog, resulting in a collaboration that was subsequently sold in Aldi stores.

Whether to take action against dupes or not is a fine balancing act. Although companies want to protect their brands, consumers are quite well-educated and they often know that the dupes are not the well-known brand. As such, is there sufficient association between the dupe and the well-known brand to create the necessary misrepresentation required under passing-off.

And why has M&S taken a stance now against Aldi, when they've allowed other caterpillar themed cakes on the market. Many articles have been posted recently comparing the various caterpillars and out of all the caterpillars, the Aldi one is definitely the closest visually to Colin. It may well be that crossing the line taking inspiration to blatant copy was what pushed M&S to take action.

A recent case, Freddy v Hugz may well assist M&S in their claims from the point of post-sale confusion which could broaden the effectiveness of passing-off. Where a product has strong reputation in its get-up, with consumers recognising the origin of the product, an 'obvious rip-off' can show a clear intention to misrepresent. Post-sale passing-off occurs when consumers would continue to be deceived as to the origin of the product after purchase. So even if there was no deception or misrepresentation at the point of sale (i.e. being purchased in Aldi instead of M&S), this would not be apparent post-sale. The obvious copycat would have an intention to maintain the connection between the goods and the proprietor during the life of the product after sale (although in this case, caterpillar cakes don't tend to last as long as a pair of jeans).

Addition considerations of litigation in a technology-focused world

The reporting of court proceedings being filed in this case started a monumental engagement across social media platforms, in part due to Aldi's media team's immediate reactions over the days following the filing. It is a reminder that not only does the legal perspective need to be considered, but the commercial viability; what are the implications of such vast media coverage, even if the judgment is in M&S's favour.

The two companies had very different approaches to social media engagement, with Aldi going full throttle with a number of posts, tweets and hashtags. M&S's approach was more low-key, with Colin declining to make a statement, but thanking consumers for their support and a brief tongue-in-cheek meme following the first week of trending on Twitter. 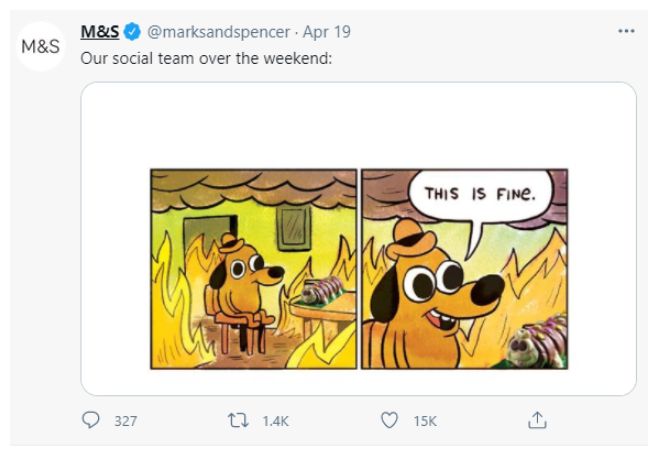 The case has definitely sparked interest in an IP case not seen for quite some time, and it will be interesting to see how the case develops. Given the public engagement, whether the case is resolved between the parties remains to be seen, but the court outcome could well set a precedent in respect of dupes/copycat brands.