UK: Register Your Designs So They Can't Be Recycled

A recent decision of the UK High Court illustrates reasons why it is often preferable to register your designs rather than relying on unregistered design protection alone.

Rothy's Inc, and subsequently Giesswein Walkwaren AG, both marketed "ballet flat"-type shoes made from knitted recycled plastic, a material not previously used for this type of shoe. Rothy's Inc had registered design protection via a Registered (EU) Community Design, RCD, for its Pointed Loafer design, and also believed its product qualified for unregistered design protection as an Unregistered (EU) Community Design, UCD.

Based on this design protection, Rothy's brought an action of infringement against Giesswein, who counterclaimed for invalidity. In deciding that Rothy's designs were valid, and that Giesswein's ballet flat infringed Rothy's RCD, the UK High Court covered some interesting points of designs practice in Rothy's v Giesswein [2020] EWHC 3391.

Even if it is clear that two designs are very similar, the need to prove copying can make unregistered design protection difficult to enforce. In the present case, the parties agreed that a ballet flat shoe according to the unregistered design (the "Pointed Loafer") was sold on Rothy's website, and that Giesswein was aware of Rothy's as a designer of similar shoes, had inspected shoes on Rothy's website, and indeed had on several occasions bought all available shoe designs from Rothy's website.

Significance of drawings in interpreting designs

Fortunately for Rothy's, they had also registered their design, giving them a second enforcement option, with which they had more success.

It was agreed that Rothy's were the first to market "ballet flat"-type shoes made from knitted recycled plastic. However, Giesswein argued that the Rothy's registered design was invalid in view of earlier ballet flat shoes made from other materials such as suede, meaning that the design protection should not be enforced. A key question for the court was whether the new material of knitted recycled plastic was part of Rothy's registered design.

To answer this question, as ever with designs, it was necessary to assess the design drawings to determine whether the material is shown. As shown below, the design drawings include crossed lines, which was argued by Giesswein could be there for any number of reasons. 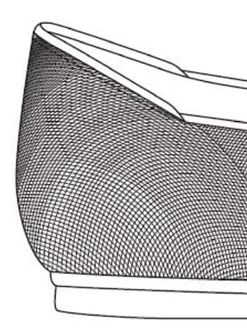 In the decision, the specific layout of lines was considered, and it was found that this layout was inconsistent with suede, and only consistent with a knitted fabric, which was capable of giving a different overall impression from prior art. Rothy's registered design was therefore found to be valid over prior art constructed from other materials and was considered to be infringed by Giesswein.

Given how difficult it can be to enforce an unregistered design, even in a case such as this, where the infringer admitted to monitoring the designer's product line, it is highly recommended to protect your designs using registered protection.

The representations are all important in registered designs, and while there was some discussion of other elements of the shoe shape in Rothy's registered design, in the prior art, and the infringing article, it is striking that the finding of validity and infringement was mostly based on the material inferred from the cross-hatching. So, if you are registering a design it is important to ensure that all details to be included in (or indeed excluded from) the drawings are carefully considered at the time of filing the application.

ARTICLE TAGS
UK Intellectual Property Copyright Trademark
POPULAR ARTICLES ON: Intellectual Property from UK
What's The Difference Between A Garden Hose And A Tractor?
J A Kemp LLP
This might sound like the start of a festive cracker joke, but is in fact the one of the main points of contention in the recent judgment, Claydon v Mzuri. The comparison was made in relation ...
The Difference Between Trade Marks, Patents, Copyright And Designs
Dehns
The term intellectual property (IP) refers to a variety of different types of legal rights.
How To Prove 'Passing Off'
Gowling WLG
'Passing off' does not have a statutory basis and doesn't need to be registered to be effective.
What To Do If Your Food Products Are Copied
Keebles
Carys says: "There are several possibilities, although food products can be challenging to protect in law. Many traditional methods for protecting other forms of intellectual property...
"You Can't Patent Algorithms" – A Guide To Identifying And Protecting AI Inventions In Healthcare
Gill Jennings & Every
This is the first of a series of articles prepared for the Intelligent Health community, directed at all innovators using artificial intelligence to solve problems in healthcare.
High Court Finds That Branded Goods Listed On Amazon.com Were Not Targeted At The UK Market
Wiggin
Lifestyle Equities CV, incorporated in the Netherlands and owned and controlled by Mr Eli Haddad, issued proceedings against Amazon UK Services Ltd, as well as Amazon in the US and in the EU (Amazon), alleging infringement ...
FREE News Alerts
Sign Up for our free News Alerts - All the latest articles on your chosen topics condensed into a free bi-weekly email.
Register For News Alerts
Article Tags
UK Intellectual Property Copyright Trademark
Related Articles
This Is Not Just Any Caterpillar… HGF Ltd
EU Court Rules Community Registered Designs May Claim Priority To A PCT Application Within 12 Months J A Kemp LLP
Why IP Matters To The UK Video Game Industry Mathys & Squire
IP Strategies For AI Innovators In Healthcare Gill Jennings & Every
Is Dasatinib Dead? – An Incredible Change To The Plausibility Threshold Gill Jennings & Every
Mondaq Webinars
How Executives Can Enhance Their IP Strategy and Performance in Switzerland
Swiss Business Hub UK + Ireland c/o Embassy of Switzerland
Webinar London UK
Future Series: The Journey to Net-Zero: Climate Change, Carbon Credits and Emissions Trading
Bennett Jones LLP
Webinar Calgary Canada
More Webinars
Comparative Guides
Anti-Corruption & Bribery
Artificial Intelligence
Banking Regulation
Blockchain
Cartels
More Guides
Mondaq Advice Centres
UK
Coming to and Investing in the UK
Global
Trademarks in SAARC Countries
Global
Investment Immigration
More MACs
Upcoming Events
Mondaq Social Media