The Renewable Energy Sources Amendment Act was published in the Journal of Laws on 14 August 2019 (the “Amendment”). It introduces a number of significant changes to the Renewable Energy Sources Act of 20 February 2015 (the “RES Act”), and other acts – especially the Energy Law Act of 10 April 1997 (the “Energy Law”) and the Wind Power Investments Act of 20 May 2016 (the “Distance Act”)

The Amendment will enter into force on 29 August 2019, with the proviso that some provisions will enter into force on 1 January 2020. The more significant changes to the auction system are suspended until the European Commission’s approval (flagged below as “temporarily suspended”). The material changes regarding the auction system are discussed below.

Changes in the auction system

1. The Amendment extends the period of the auction system from 31 December 2035 to 30 June 2039. It means that projects in the auction system, that commence operating by 30 June 2024, will be allowed to receive support for 15 years (temporarily suspended).

2. The deadlines for selling energy for the first time will be extended. Energy producers must comply with those deadlines if they are to receive auction system support. The new deadlines are as follows:

c. Installations using offshore wind power – there are no changes and the deadline of 72 months was maintained;

d. Installations other than those described above – 42 months (before: 36 months).

Projects that secured support in auctions in previous years will also be allowed to extend their deadlines to sell energy for the first time to match the deadlines indicated in this point (for details see point 24d).

3. The RES Act includes conditions which need to be met by renewable energy source (“RES”) generation devices, including a limitation of the period between their manufacture and installation. These deadlines are now extended to match those mentioned in point 2. Installing older devices in RES installations will disqualify the RES installation from receiving auction system support (temporarily suspended).

4. The pre-qualification process conducted in order to obtain a certificate of admission to the auction system has been simplified:

a. On-shore installations will no longer have to submit local zoning plan extracts.

b. Off-shore wind farm installations shall not have to submit environmental decisions. Thus, to qualify for auction system support, it will be sufficient to have a decision allowing to raise and exploit artificial islands, and connection conditions or a connection agreement. This is a relatively early stage of development of these projects, but some projects in Poland have already achieved it.

6. Prior to the commencement of a plant’s commercial operation, it will be possible to update the offer submitted in the auction once, after the auction is won. Such an update may concern a change of:

b. the volumes of electricity declared in the auction bid between particular years of support (however without changing the total volume of electricity offered).

Some projects that have secured support in auctions in previous years will be allowed to update their offers (see point 24) (temporarily suspended).

7. The President of the Energy Regulatory Office will have to announce the results of the auction in 21 days. There was no such deadline before.

8. Producers will no longer be obliged to inform the President of ERO on meeting the deadlines set in the construction schedule submitted at the prequalification stage.

9. The settlement of the volumes produced during the year and the sanctions for underperformance have been clarified:

a. only the energy settled with Zarządca Rozliczeń S.A. is considered as energy which is to be counted when determining whether the producer generated at least 85% of the energy offered in the auction;

b. sanctions for failure to produce at least 85% of the energy offered in the auction shall apply only to installations that have sold energy for the first time within the statutory period (see point 2);

10. Contrary to the previous amendments of the RES Act, it has been clarified that the certificates of admission to auction, which were already issued by the President of ERO, will be valid for the period of time they were originally issued for, and it will not be necessary to obtain new certificates.

11. The Amendment makes no changes in the structure of the so-called auction baskets, however, it sets budgets and volumes for auctions that will take place in 2019. The Ministry of Energy foresees that as a result of auctions in 2019, support will be provided for onshore wind installations with total power of 2500 MW and photovoltaic installations with total power of 750 MW 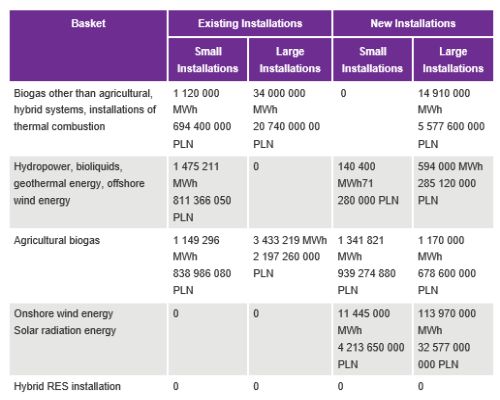 13. The maximum reference prices for particular RES installations were already indicated in the Regulation of 15 May 2019 of the Ministry of Energy (published on 29 May 2019). For PV installations of less than 1 MW in total power, the price is PLN 385 (last year it was PLN 420). Onshore wind energy with total power exceeding 1 MW cannot offer a price higher than PLN 285 (last year it was PLN 350).

14. Regarding how the auctions are organized, the Amendment indicates that there is no need to run auctions in 2019 with the use of a dedicated internet platform. However, even if the auctions are not run through the platform, it will be possible to participate by making bids in electronic form with a qualified electronic signature.

15. The maximum deadline for delivering energy to the grid for the first time that needs to be included in the interconnection agreements, was extended to 30 June 2021 for some of the older projects. This provision pertains to connection agreements which were either:

b. in which a statutory 48-month deadline for supplying energy to the grid for the first time has already passed on the date of entry into force of the Amendment.

16. Each producer being a party to such an agreement may request from the grid operator an extension of the connection deadline to 30 June 2021. In case of refusal, the producer may submit a dispute resolution request to the President of ERO.

17. The projects which were awarded with a support in the auction will still be allowed to request adjustment of the connection deadline to dates indicated in point 2.

Extension of the Feed in Premium system

18. The Amendment extends support in the FiP system for installations using (i) agricultural biogas, (ii) biogas obtained from landfills, (iii) biogas obtained from sewage treatment plants, (iv) other biogas and (v) hydroenergy. The installations using this energy, with total power not less than 500 kW and no more than 2.5 MW (before: 1 MW) will be able to apply for support (temporarily suspended).

19. Moreover, installations using biomass with total power not less than 500 kW and no more than 1 MW will be able to obtain support from the FiP system (temporarily suspended).

Changes in the Distance Act

20. Importantly, the Distance Act’s provisions regarding building permissions for onshore wind installations were changed. Currently, building permits issued prior to the entry of the Distance Act into force will not expire on 16 July 2021 if the permit for use of the plant was not issued by that date, but, this date shall set the clock running for the construction works deadline, as indicated in the construction law. It means that construction works on the wind farm should start no later than by 16 July 2024.

Changes in the rules of granting concessions to RES-producing installations

21. The rules of granting concessions to RES-producing installations have changed. Under the new Energy Law, such concessions should only be granted to RES installations with installed devices no older that as described in point 3.

22. Alternatively, concessions can be granted to RES installations that have valid confirmations: (i) of compliance with certified types of device or declarations of compliance with the relevant standards issued by their manufacturers for given RES installation locations and (ii) that their generation devices were produced no earlier than 72 months before the date of generating energy for the first time.

Situation of projects that received support in previous auctions

24. Generally, projects that secured support in auctions in previous years are subject to the rules applicable when the auction was won. There are some exceptions to this rule.

a. The extended period of support in the auction system until 30 June 2039 applies to these projects (see point 1) (temporarily suspended).

b. The obligation to produce at least 85% of the volume declared in the auctions will be calculated on the amended principles described in point (9)b for all projects.

c. The possibility to update bids made in auctions will be available to these projects under the new regulations (see point 6) (temporarily suspended).

d. Producers may set new deadlines for commencing sales from given RES installations for the first time, provided they do not cross the deadlines set in the Amendment. This means that RES installation construction deadlines may be effectively extended.

Entry into force of the Amendment

25. The Amendment enters into force 14 day from its publication, with several exceptions. On 1 January 2020, provisions regarding the obligation of the President of ERO to publish auction results within 21 days (see point 7) and additional restrictions in obtaining concession on producing RES energy (see point 21) enter into force

26. Several provisions of the Amendment are suspended until the European Commission approves the public aid provisions as compatibility with the internal market, or once it recognises that these amendments do not constitute a new form of state aid. This applies to the extension of the auction system period (see point 1), extending the period during which equipment installed in RES installations must be manufactured (see point 3), the right to update auction bids (see point 6) and changes to the Feed-in-Premium system (see points 18 and 19).

27. Until the date of acceptance of the Amendment by the European Commission, the current provisions of the RES Act apply.