The EPO's European patent system is on the brink of the biggest change in a generation – from 2023 it is expected that a new unitary patent (UP) will become available via the EPO.

Requesting a UP will create a single patent with unitary effect across all of the EU Member States (EU MS) that have ratified the UPC Agreement. Based on current ratifications, at launch the initial UP's coverage will include at least 17 EU MS, including Germany, France, Italy and the Netherlands.

For future UPs, if all participating EU MS ratify the UPCA, the UP will cover 24 EU MS. But initially, the UP will cover the territories of countries that have ratified the UPC Agreement at the date of the registration of the unitary effect of the individual patent. Coverage of a UP will remain fixed throughout its lifetime and will not be extended to EU MS that join the UPC at a later date. The UP is subject entirely to the exclusive jurisdiction of the new UPC.

Renewal fees for a UP will be payable to the EPO in Euros. The EPO has set the renewal fees to be equivalent to the combined renewal fees that would be payable in the four countries where EPs were most often validated in 2015. Although the UP will be significantly more cost-effective than a widely-validated classical EP, because the UP is a unitary right, it is not possible to reduce the annual renewal fees by tapering the R-MS territories during the lifetime of the patent.

It is important to remember that, in order to obtain coverage in other EPC countries outside the UP at the time, patentees will still need to validate nationally in those EPC states.
So, will the UP be able to provide better value for patentees? Well, that depends!

In terms of validation costs relative to the population and GDP of the separate initial 17 UP EU MS, the UP presents excellent value as shown below. But in order to obtain coverage in other EPC countries outside the UP EU MS at the time, patentees will still need to validate nationally in those EPC states, which will be an additional cost on top of the UP itself. 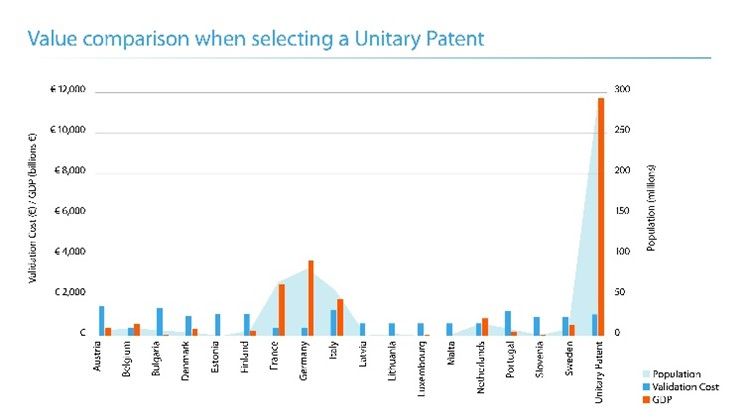 In terms of lifetime costs, the chart below shows the relative cumulative costs of an EP patent granted at year 6 (validation costs + renewal costs at year 6) and then the subsequent renewal costs from year 7 onwards, including official and professional fees. Assuming the patent was granted in year 6, validation and renewal costs become payable on grant. Depending on where the EP patent is validated, the cumulative costs will vary. A UP represents a substantial cost saving over the lifetime of the patent compared to separately validated EPs in 4 or more UP countries, however, it is important to remember that as a unitary right, a UP patent must be renewed as a whole, whereas EP patents validated may be renewed, or not, separately. 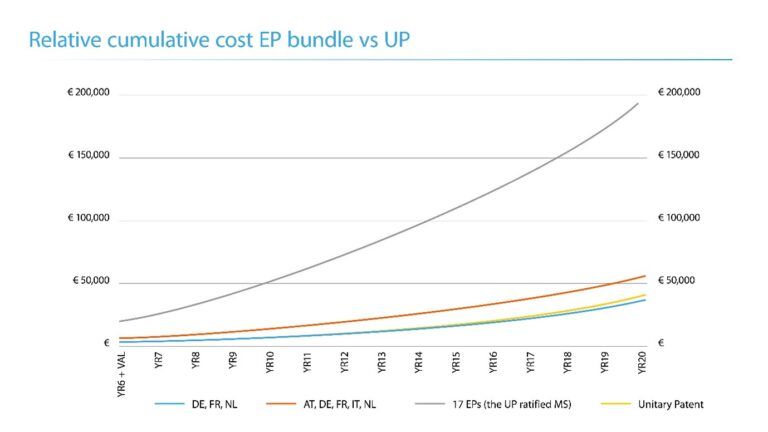 These figures have been shown as a guide for a specification filed in English having 15 claims.

ARTICLE TAGS
UK Intellectual Property Patent
POPULAR ARTICLES ON: Intellectual Property from European Union
What Is A Patent?
Keltie LLP
A patent is a time-limited monopoly awarded by countries as an incentive for investment in novel and non-obvious technical innovation. The purpose of the patent system is to allow companies...
More Drama For Combination SPCs
Potter Clarkson
The stage is set for another referral to the Court of Justice of the EU (CJEU) on the eligibility criteria for Supplementary Protection Certificates (SPCs) for "combination products"...
Gene Editing : CRISPR Breakthroughs Highlight IP Questions
Keltie LLP
There have been some exciting announcements about the application of CRISPR-Cas9 type gene-editing technology to treat serious illnesses in the past few weeks.
1. What Is An IP Driven Start-up?
Marks & Clerk
Few start-ups are established without the founders having an eye on a future exit, even if they hope to change the world along the way or as a final outcome of their efforts.
Patent Protection For Medical Devices – The Devil Is In The Details
HGF Ltd
It is well accepted that the development of new medical devices is very resource-intensive. It is, therefore, no surprise that companies apply for patent protection for new medical devices with the aim...
A Change To The Rule 71(3) Communication From The EPO
Marks & Clerk
A "prior national right" or "earlier national right" is a national patent or application which was filed before, but published after the effective filing date of an EP patent or application.
FREE News Alerts
Sign Up for our free News Alerts - All the latest articles on your chosen topics condensed into a free bi-weekly email.
Register For News Alerts
Article Tags
UK Intellectual Property Patent
Related Articles
Patent Law Update: Shortened Compliance Period For GB Divisionals? Marks & Clerk
Review Of EPO Software Decisions In 2022 J A Kemp LLP
Review Of The SPCs And Compulsory Licensing EU Frameworks And New Unitary Patents: What Is The Impact On The Life Sciences Sector? Norton Rose Fulbright
What Is A Trade Mark Clearance Search? Potter Clarkson
Fashionably IP – New Beginnings In The Form Of Recycling, Upcycling And Resale In The World Of Fashion (Podcast) HGF Ltd
Mondaq Webinars
Considering the Nigerian Start-Up Act & The Opportunities for Tech
Oake Legal
A Guide for Business and Investors – The Sleeping Giant; Why is Nigeria the New Emerging Market for Global Business
Threshing Fields Law Practice
More Webinars
Comparative Guides
Anti-Corruption & Bribery
Artificial Intelligence
Banking Regulation
Blockchain
Cartels
More Guides
Mondaq Advice Centres
UK
Coming to and Investing in the UK
Global
Trademarks in SAARC Countries
More MACs
Upcoming Events
Data Breaches: Dealing With The Long Tail
Lewis Silkin
Webinar London UK
ThinkHouse Spring Seminar 2023 - Birmingham
Gowling WLG
Seminar Birmingham UK
Mondaq Social Media