by Giles Pinnington
Marks & Clerk
Your LinkedIn Connections
with the authors

The world is looking to decarbonize its fuel and energy sources, and clean-burning hydrogen is poised to have a key role in energy storage. In certain applications where heat is required, hydrogen can directly replace carbonaceous fuels, such as in natural gas grids, but in other sectors, it is preferable to convert the hydrogen's chemical energy directly into electricity, which is where fuel cells step in.

It was in 1842 that Sir William Grove, who would later become an expert on patent law, described the first hydrogen fuel cell. At the time this included alternating tubes of oxygen and hydrogen containing platinum foil in contact with dilute sulphuric acid. Although fuel cell technology has come a long way since then, the fundamental function remains largely unchanged.

Hydrogen fuel cells require an anode and a cathode connected by an electrical circuit and are physically separated by an electrolyte that controls the passage of ions. Hydrogen is fed to the anode, where a catalyst strips the hydrogen gas of its electrons to produce protons. The protons then travel through the electrolyte to the cathode where they are combined with oxygen to form water. The electrons travel to the cathode via the electrical circuit. This generates an electrical current, which can be used to power electrical systems connected to the fuel cell.

Although the fundamental principles of hydrogen fuel cells have been known for around 180 years, innovation in this field is continuing as the desire to decarbonise increases. Patent filings, whilst a lagging indicator due to taking time to convert the research and development into a patent application and then published 18 months after it is filed, provide an insight into trends within technology areas.

One way to look at innovation trends in a technology area is to see where patents are being first filed and then what industrial sector they relate to. To this end, we have analysed patents classified as relating to fuel cells and specifically referring to hydrogen gas that have been published over the last 10 years. In this period, Japan has been the standout performer, being the country of origin for almost half of all applications, followed by China, the USA, South Korea, and Europe. 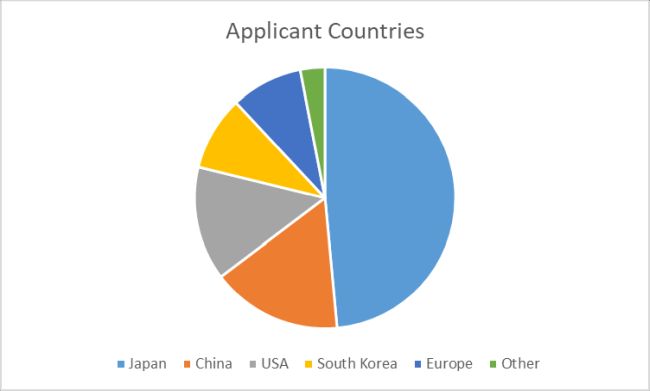 Over this period, the number of applications relating to hydrogen fuel cells has remained consistent at around 2000 patent families (a collection of patent applications covering the same or similar technical content) per year, indicating consistent R&D efforts in this area. Furthermore, these figures do not show filings made in the last 18 months as these are not yet published.

It is unclear as to whether the increased efforts to decarbonise will mitigate the downtick caused by the Covid pandemic and it is far too early to see any effect caused by the invasion of Ukraine, so we wait to see how these competing factors have affected innovation in this area. 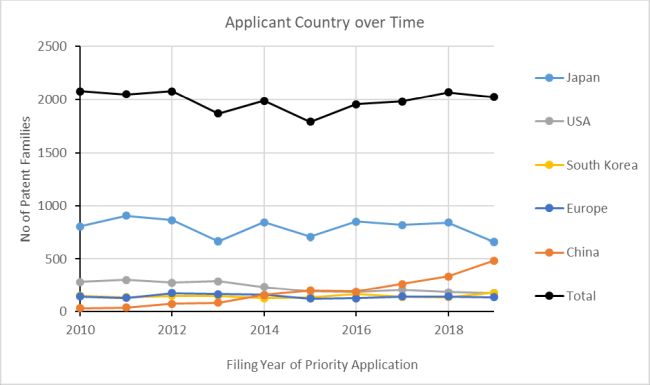 The top 50 filers of patents covered by our research over the last 10 years were assigned to one of nine industrial sectors in order to analyse which are at the forefront of innovation in hydrogen fuel cells. Perhaps unsurprisingly, the automotive sector is dominant, making up over half of filings. Multinational firms (those active in a range of technology areas) and companies dealing in ceramics and metals make up another 25% of filings, and it should be noted that some of these companies are also suppliers for the automotive sector. The remainder of filings are made by companies in the electronics and chemical sectors, alongside research institutes and entities dedicated to the development of fuel cells. 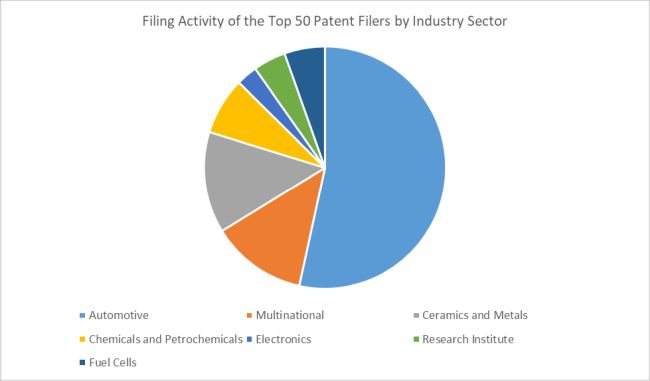 An examination of the top 10 filers reinforces our previous observations, with six being automotive or automotive supply companies, three being ceramics companies (with significant involvement with the automotive sector), and one being a multinational. Furthermore, eight of the companies are based in Japan. A special note should be made regarding Toyota, which has filed almost as many patent applications relating to hydrogen fuel cells since 2010 as the next three most prolific filers combined.

There are no strong changes for each sector over the past 10 years, with year-to-year variation exceeding any longer term trends, indicating that there is a consistent commitment to the research and development of hydrogen fuel cells across a range of industries. 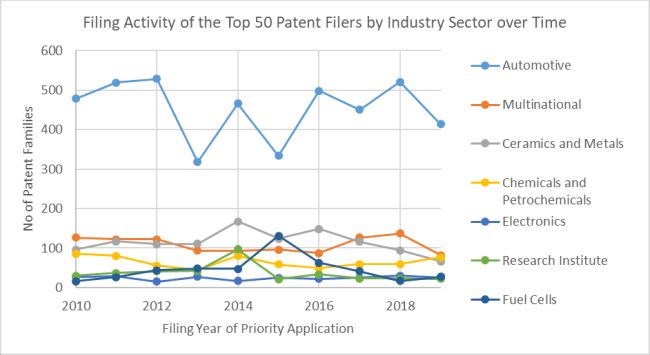 Overall, innovation in the arena of hydrogen fuel cells has been perhaps surprisingly consistent for the last decade, being led by the automotive sector, particularly in Japan.