Despite the year delay, a lack of crowds and tight protocols prohibiting the mingling of athletes, the Tokyo Olympics have delivered a number of memorable moments. Sky Brown became the youngest athlete to win an Olympic medal for team GB at the age of just 13; Mutaz Barshim (Qatar) and Gianmarco Tamberi (Italy) made the decision to share the Gold medal in the high jump instead of battling for first place in a jump-off; and Sifan Hassan (Netherlands) won her 1500m heat after falling to the floor with less than 400m to go. We also saw 23 year old Japanese-Haitian-American Naomi Osaka be the first tennis player to light the Olympic cauldron at the Opening Ceremony, in what she called her "greatest athletic achievement". But how does the Olympic torch work? And what patents exist for technology relating to it?

This patent describes a fuel delivery system and burner suitable for an Olympic torch. In one aspect, the fuel delivery system includes a regulator, which is mounted in a torch body and is in fluid communication with a fuel supply, such as a fuel canister. The regulator maintains the fuel exiting the fuel canister at a substantially constant pressure within a regulator cavity. Fuel passes from the regulator cavity into a tube, or conduit, that extends through the path of a flame that is produced by the burner. The tube is preferably shaped into a coil around the area of the flame so that the coil is heated by the flame, which assures that the liquid fuel is vaporised as it passes through the coil. The coil may act as a flame spreader, giving the flame a much larger, fuller appearance.

This patent presents a torch that can ensure combustion of fuel (used to generate a flame) takes place even in poor weather conditions, such as in rainy or windy conditions, without impairing the design. To achieve this aim, a torch body is provided, comprising a concave part in an upper surface of the body, a combustion unit placed in the concave part to light a flame, and an air passage formed in the torch body to allow air intake. The air passage is configured to transfer the air to the concave part thereby ensuring that the combustion unit has an air supply for the generation of the flame. 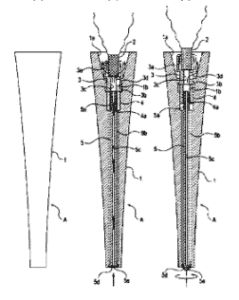 JP2019079764A relates to a decorative elongated object, such as Olympic torch comprising the elongated object. The patent application in question states that conventional extrusion-molded elongated objects have a uniform cross section running between their ends, which, as a result, can have a monotonous outer shape. The application further states that such elongate objects have not therefore been used for decorative purposes. To overcome this issue, JP2019079764A discloses a method for manufacturing a decorative elongated object that is at least partially tapered, comprising the steps of (i) molding, by extrusion molding, an elongated material having a cross section comprised of a plurality of radial lines and (ii) cutting and removing a side surface of the elongated material, the cutting being performed in an angled direction with respect to the side surface. 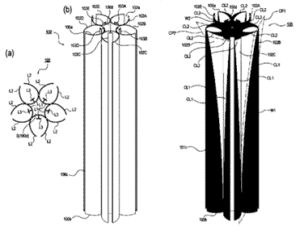 ARTICLE TAGS
UK Intellectual Property Patent
POPULAR ARTICLES ON: Intellectual Property from UK
UPC Could Open Its Doors In 2022
HGF Ltd
With news that the Austrian parliament has ratified the Protocol on the provisional application of the Agreement on a Unified Patent Court on 2 December 2020, the Unified Patent Court (UPC) opening in 2022 is becoming more likely.
Will The European Patent System Embrace Grace Periods?
Marks & Clerk
The European Patent Office is conducting a survey of European patent applicants, to assess the impact of the EPO's strict novelty requirement on applicants' disclosure and commercialisation strategies.
EPO Launches Consultation On Grace Periods
J A Kemp LLP
The EPO has launched a user consultation into the desirability of introducing a "grace period" into the European patent system.
Tarilian Laser Technologies – A Case Study In Due Diligence
HGF Ltd
When deciding whether to invest in a company, an investor will inevitably have to decide the value of the company.
EPO Board Of Appeal Finds "No Legal Basis" For Requirement To Adapt The Description To Conform To The Claims
J A Kemp LLP
Such amendments, whilst occasionally tedious, became an accepted part of practice at the EPO and had no noticeable impact on the scope of protection.
Start-Ups & IP, A Case Study: SleepCogni
HGF Ltd
Using SleepCogni as a case study, we look at some key ways that IP can help start-ups to develop their technology and secure investment. SleepCogni is a SleepTech start-up who have developed...
FREE News Alerts
Sign Up for our free News Alerts - All the latest articles on your chosen topics condensed into a free bi-weekly email.
Register For News Alerts
Article Tags
UK Intellectual Property Patent
Related Articles
When Does A Disclosure Invalidate A Patent? Albright IP
With News That The Austrian Parliament Has Ratified The Protocol On The Provisional Application Of The Agreement On A Unified HGF Ltd
A Review Of Railway Innovation Through Patenting Trends Marks & Clerk
E-Scooters - Manufacturers Continue To Invest Despite Rules Against Road-Use Marks & Clerk
Expanding Frontiers Of Intellectual Property Rights In Computer Games And Virtual Reality Marks & Clerk
Mondaq Webinars
Latest Updates in the Turkish M&A Landscape and Looking Ahead to 2022
Solak & Partners
Webinar Istanbul Turkey
Diverse Liquidity Options for Complex Cayman Islands Fund Structures
Travers Thorp Alberga
Webinar Grand Cayman Cayman Islands
More Webinars
Comparative Guides
Anti-Corruption & Bribery
Artificial Intelligence
Banking Regulation
Blockchain
Cartels
More Guides
Mondaq Advice Centres
UK
Coming to and Investing in the UK
Global
Trademarks in SAARC Countries
More MACs