As you may have read in our previous bulletins (UK Government Provides Extra Protection for Businesses with Ban on Evictions for Commercial Tenants Who Miss Rent Payments, COVID-19: Key Considerations for UK Commercial Landlords, UK Real Estate Sector Update, and UK Real Estate Sector Update: Recovery of Rental Arrears), over the course of the past 18 months, the UK government has taken exceptional steps to protect and support tenants who have suffered due to the pandemic. The extraordinary measures included legislation that:

These measures sat alongside a code of practice for commercial property relationships during the pandemic (the "Code"), published by the UK government on 19 June 2020. The Code applies to all commercial leases held by businesses that have been negatively impacted by the COVID-19 crisis, although it is likely to be most relevant to the hospitality, leisure, and parts of the retail sectors that have borne the brunt of the pandemic.

The purpose of the Code is to help facilitate a fair and transparent discussion between landlords and tenants over rental payments and arrears. The Code, whilst voluntary, sets out the expectation that landlords and tenants should share the costs and risks arising from the COVID-19 pandemic in an equitable and reasoned way. Although tenants remain legally required to pay the rent due under their leases (unless expressly renegotiated by agreement with their landlords), the Code expects tenants who are unable to pay in full to enter into discussions with their landlords to find a way to pay what they can afford. The Code further encourages landlords to provide "support to a tenant where reasonably possible, whilst having regard to their own financial commitments and fiduciary duties".

The past 18 months have seen the application of the above measures being extended at regular intervals as it became evident that the pandemic, and its economic effects, were enduring. The real estate sector has simultaneously been awash with speculation as to when, and also how exactly, the government would withdraw these measures and what (if anything) would replace them. Fundamentally, the sector has been anxious to understand what would happen to the ever-increasing amount of unpaid rent that has been accruing whilst landlords' hands have been metaphorically tied.

In April 2021, the government launched a call for evidence to canvas the real estate sector for its view on how best to proceed. The call for evidence stated that the measures outlined above "have encouraged many landlords and tenants to come together to agree to share the impact of the pandemic in fair and sustainable ways with landlords agreeing to waive or defer some or all accumulated rent debt to enable tenant businesses to survive, preserve jobs, and make their contribution to the recovery. However, there remain many landlords and tenants that have been unable to reach agreement, and the level of accumulated rent debt threatens the existence of many tenant businesses and the millions of jobs that they support."

Further, it stated "to assess the true situation on the ground the government launched a call for evidence inviting landlords, tenants, and other interested parties to describe their experience in seeking to negotiate settlements of rent debt during the pandemic. The call for evidence also sought views on a number of options for withdrawing or replacing the existing tenant protection measures as we embark upon the recovery."

The government in its consultation recognised that the restrictions "cannot and should not continue indefinitely" and that "a carefully managed exit is necessary to preserve tenant businesses and the millions of jobs that they support".

This consultation stated that "if there is evidence that productive discussions between landlords and tenants are not taking place, and that this represents a substantial and ongoing threat to jobs and livelihoods, the Government will not hesitate to intervene further".

As part of the call for evidence, respondents were questioned about their experiences of negotiations relating to rent arrears.

A significant group of tenants stated that they had also commonly experienced landlords refusing to negotiate. Alternatively, a subgroup of landlords suggested they had pursued what were commonly referred to as 'asset management deals' – this is where some form of rent forgiveness (reduced, deferred or waived) was agreed upon in return for something beneficial to the landlords (e.g. removal of a break clause or an extension to the lease term).

More responding tenants (54.9%) had not been able to agree any concessions than those that had been able to do so (42.2%). The predominant reason given for this was the willingness of landlords to negotiate.

The sectors given the most concessions were as follows: retail, hospitality, and leisure granted by 71.4%, 66.2%, and 45.9% of responding landlords, respectively.

It was commonly expressed by all parties that the Code allows both tenants and landlords to avoid negotiating if they want to and hence negotiations are often dependent on the willingness of the individuals involved.

The consultation asked respondents to consider six options on how best to move forward:

Respondents were asked to rank the six options in order of preference. Views were highly polarised between landlords and tenants. The most preferred option for 79% of responding landlords was Option 1 (allow the measures to expire on 30 June 2021). Option 6 (binding non-judicial adjudication between landlords and tenants) was the most preferred by responding tenants (57%). First preferences across all options are summarised in the extracted Figure 5 below: 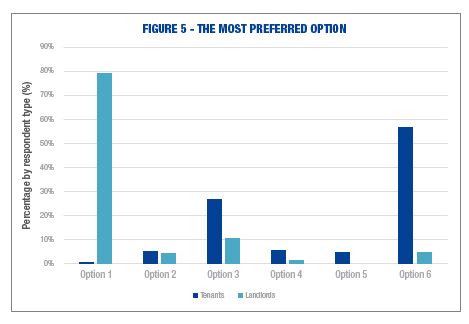 Many doubted that the government measures would once again be extended beyond 30 June 2021, pointing to the irrefutable evidence that by June 2021 the majority of restrictions had been lifted or eased and that tenants (for the most part) were able to start trading again or occupying premises. However, it was announced in June that:

The policies outlined in the statement have been drafted to work in conjunction with the extension of the measures referred to above, to "provide the breathing space needed for successful negotiation between tenants and landlords".

The key points to note from the policy statement are:

The government's proposal for binding arbitration (following other countries such as Australia and backed by stakeholders such as the British Retail Consortium, UK Hospitality, and the British Property Federation) is an attempt to provide a long-term solution to the resolution of rent arrears, and to end the current uncertainty.

In the absence of landlords and tenants agreeing among themselves to defer or to waive an appropriate proportion of the arrears, the legislation will ring-fence rent debt accrued from March 2020 for commercial tenants who have been affected by COVID-19 business closures until restrictions for their sector are removed, and introduce a system of binding arbitration in respect of the rent debt.

It is the government's expectation that this will signal a return to normal contractual arrangements for those tenants able to pay rent debts in full and not affected by closures, and for any debts accrued outside of the ring-fenced period.

The new legislation will apply to all commercial rent debt accrued as a result of COVID-19 closure restrictions in sectors which have been impacted by "Non-Pharmaceutical Interventions", being actions, apart from getting vaccinated and taking medicine, that people and communities can take to help slow the spread of COVID-19 and other illnesses.

Once the new system is in place this will mean:

If a tenant breaches any other terms of their contractual agreement with their landlord (i.e., by causing damage to the property) which gives rise to a right to forfeit, the landlord is still able to move to evict them. Tenants will also be bound by the decision of the arbitrator and will have to pay rent debts accrued during the ring-fenced period in accordance with that decision.

No details of the arbitration process have been released at this time but it is the government's aim "to ensure that this is an impartial and manageable process which should only be used as a last resort when negotiations have failed and providing a faster and easier resolution than through the courts."

The government has stressed its strong preference for landlords and tenants to use the principles embodied in the new version of the Code to reach agreement before resorting to binding arbitration, and has indicated that it expects landlords and tenants to contribute to the cost of arbitration if both are found to have negotiated in good faith. However, if any party is found not to have negotiated in the spirit of the legislative principles, arbitrators may be empowered to award one party their costs as part of their decision.

The policy statement is light on the details of the guiding principles of the binding arbitration to be included in the forthcoming legislation. It is however clear that the government expects the parties to undertake a fulsome and genuine negotiation process, conducted in the spirit of the new version of the Code, to settle outstanding arrears disputes, and that the binding arbitration is to be considered as a "last chance saloon" option only.

The move towards binding arbitration is, of itself, an interesting one given that it signals a government-enforced abrogation of property rights and a departure from the legal contractual rights of the parties as set out in the relevant leases, all in favour of an approach on a case by case basis of what is deemed to be equitable or fair in the eyes of the individual arbitrator.

The guidance seems to indicate that landlords will be expected to forego rent (or certainly make concessions) in respect of those premises that were legally required to close due to COVID-19 and where the relevant tenant's revenues would typically be generated from premises-based sales. It will be interesting to see how the legislation deals with quirks, such as retailers who have a strong online presence and whose trading revenues have accordingly been robust, and also those retailers who have ostensibly abused the moratorium to their economic advantage, refusing to pay rents whilst still being open for trade throughout the pandemic. Further, the nature of the imposition and lifting of various restrictions at various different times and the sector-specific impact of those varying restrictions mean that the arbitrators will no doubt have fairly wide discretion in deciphering and implementing the legislation. How will the legislation cater for nuances in circumstances and sectors (such as non-essential retail and eat-in restaurants that were subject to restrictions but were still able to trade profitably by providing a takeaway or delivery service)? Will private individuals who rely on rent from commercial property for their livelihoods be treated differently from large institutions that may be considered better able to afford the hit? This all remains to be seen and, once again, the property sector waits for the next twist in the pandemic-driven saga.