by Giles Murphy
Smith & Williamson
To print this article, all you need is to be registered or login on Mondaq.com.

Our 19th annual survey of the legal sector explores the latest issues and trends affecting law firms and the legal market.

Optimism in the legal sector is the most positive it has been since 2007 according to the results of our latest survey. 82% of respondents are confident about the coming year, up from 61% last year. Smaller firms, with 25 partners or fewer, were the most confident. Signs of renewed growth in the UK economy appear to be the key factor behind the results, fuelling hopes that a more solid recovery may be on the way. 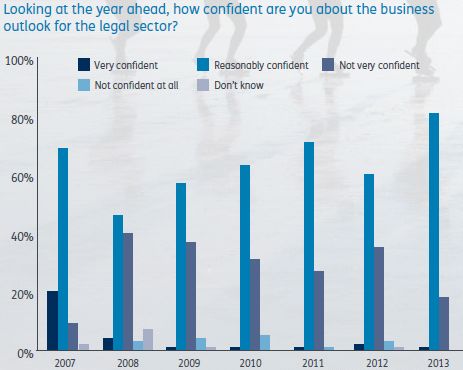 Responding to the business climate

Despite the renewed confidence among firms, securing a sufficient share of the work out there is proving increasingly tough, with 81% reporting that the environment has become more competitive in the past year. Larger firms are experiencing the highest levels of competition, with more than nine in ten practices with 100+ partners reporting an increase in competitive pressure.

Many firms (39%) have set up a new service line in the last year, while 24% expect to do so in the next 12 months. This, in addition to the high number of lateral hires, suggests a focus on cross-selling services to existing clients, rather than on winning new business. It also indicates a need for an increasing level of diversification that law firms have traditionally struggled to achieve. Among other measures taken by respondent firms in the past year, 18% have sub-let office space, 15% have de-equitised partners, 14% have opened a new office in the UK, 12% have opened an overseas office and 11% have centralised functions. A third of firms surveyed are considering a merger with another firm, while respondents from a number of larger firms are anticipating opportunities for overseas expansion in the year ahead.

Reducing lock-up is widely seen as a key means to help improve firms' finances by our survey respondents, with five in ten firms thinking it likely they will reduce lockup in the next year, while a further four in ten see this as possible. Why do so many firms believe that this source of funding will come good in the next year when it has alluded them over the last five?

Almost a fifth (18%) of surveyed firms expect to merge with another business in the next year, while a further 10% are seeking a merger partner. This is broadly consistent across all sizes of firms responding to our survey and could potentially have a significant impact on the shape of the legal market.

Where firms have been involved in merger discussions, they say that these typically last for more than six months. Where mergers have failed, too many participants appear to reach this conclusion too slowly (only 23% in less than three months). This underlines the importance of identifying key merger issues early on and resolving any deal-breakers swiftly. 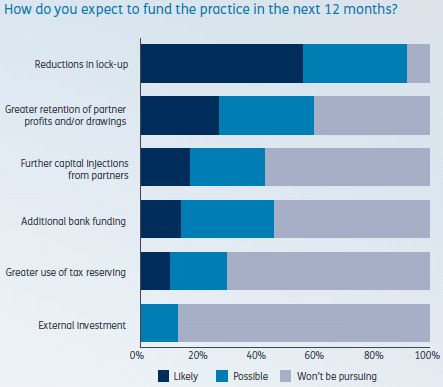 Pressure on fees ranked as the greatest challenge for respondents, with half of all practices citing this as an issue. This is particularly severe among larger firms – three quarters of practices with 100+ partners say pressure on fees is a concern, while only a third of firms with 25 or fewer partners consider it an issue. Maintaining profitability and the ability to win new work were further issues of particular concern; the latter appears to be giving greatest concern to firms in our sample group with 26-49 partners.

The Legal Services Act is clearly set to meet its objective of increasing competition in the legal services marketplace, according to our survey, with almost nine in ten respondents anticipating greater levels of competition as a result. While most accept that the retail end of the legal services market will be affected most, our results suggest there is considerable nervousness around competition among the top 200 law firms. 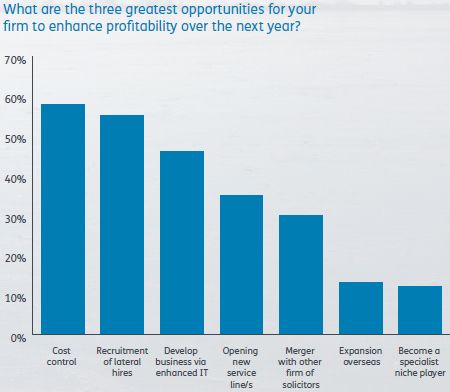 Only half of firms are reviewing their structure in light of the HMRC consultation on the taxation of partners, due to take effect from 6 April 2014. However, in light of the tougher than expected proposals (see p.3) we expect that number to increase significantly.

Pension auto-enrolment – ready or not?

Worryingly, more than half (56%) of our survey respondents report that they have yet to contract with an insurance provider for pensions auto-enrolment, and over three-quarters (78%) have not yet considered their options, while nearly half (47%) do not have an auto-enrolment project team or plan in place. Between 2012 and 2017, every employer is legally bound to designate a qualifying workplace pension scheme into which it will automatically enroll all of its qualifying employees and make contributions on their behalf. The costs of setting up a scheme from scratch or ensuring that a pre-existing one is compliant are now starting to rise so if you have yet to take action, our advice is to do it now.

We have taken great care to ensure the accuracy of this newsletter. However, the newsletter is written in general terms and you are strongly recommended to seek specific advice before taking any action based on the information it contains. No responsibility can be taken for any loss arising from action taken or refrained from on the basis of this publication. © Smith & Williamson Holdings Limited 2013. code 1485/2013/db 13/1127 expiry 31/05/2014