UK: Our Survey Says - A Summary Of Our 14th Annual FSMG Survey

46% of businesses predict growth despite gloom about the overall economic outlook and concern over regulation and tax.

Firms in the financial services sector are generally confident about the state of their business and about growth prospects, both in terms of turnover and recruitment.

According to our 14th annual financial services and markets group (FSMG) survey 2011/12, nearly 50% of respondents expect recruitment in the next 12 months to increase or strongly increase. This is up by 6% on the previous year. "The belief that companies will grow shows they are resilient and have confidence in their own ability," says Colin Aylott, corporate tax director. Further, in 2011/12, 52% of businesses said their turnover had actually increased over the last 12 months, compared to 44% in the previous year.

Those surveyed are considering important changes to their business, with nearly half the respondents (45%) considering changing their business structure and 29% stating they would consider merging with another business over the coming year. A further 60% of respondents are looking to expand the range of their products and/or services. "These are significant numbers and are reflective of the dynamic nature of the sector and its ability to respond to threats," says Colin. "The financial sector is innovative and fast moving," he adds, "businesses are therefore capable of making and implementing decisions quickly."

There is a marked change in the foreign financial centre perceived as the biggest threat to the City of London. Last year it was resoundingly New York, with 41% of respondents citing it as the biggest threat. However, this is now seen as the Far East, evenly split between Singapore (21%) and Hong Kong (19%). "These markets are also areas financial sector businesses are looking to expand into to take advantage of Asian markets," explains Colin.

What is happening in the US that is affecting how New York is perceived and so making people more wary of the Far East? "It is difficult to pinpoint one specific reason but probably a combination of factors, many perceived as attacks by authorities on the sector. The proposed introduction of the Dodd-Frank law, the Foreign Account Tax Compliant Act (FATCA) rules, coupled with existing Sarbanes Oxley complexities and general hostility to the financial sector on the streets of New York with ongoing street protests and business occupations, are having a significant impact," Colin comments.

He adds: "Compliance with the myriad of rules and regulations will be a complex and costly process for many financial institutions both ahead of the new rules and after their introduction, even though, for example, some of the FATCA changes are not due to come into force until 2017. The legacy of all this new legislation will be felt for many years."

The UK is far from immune to these issues. In our survey, the biggest perceived threats to UK financial sector businesses, and the two subjects painted most negatively, are tax and regulation.

Colin comments, "While there is pressure on the Government to act in connection with perceived financial sector excess, it needs to be very careful to ensure it doesn't drive businesses away with negative comment or excess regulation/HMRC scrutiny. The Far East is clearly trying to attract good entrepreneurial business with their low tax and lower regulation regimes and the Government needs to take this into account."

One tax that was almost wholly regarded as bad news by respondents, unsurprisingly, was the much mooted financial transactions tax. 94% of businesses thought it would be bad or very bad for London as a financial sector. One respondent pointed out that the UK already has a transaction tax, namely, stamp duty. Colin agrees, stating that, "The Government needs to firmly shut the door on this unpopular and potentially damaging tax. The resulting uncertainty is not helping financial sector businesses at all."

There is a clear view on deterioration of the economy, a view borne out by Moody's comments on 14 February 2012 about possibly downgrading the UK's credit rating. This is a clear change from 2010, when 81% of respondents felt at that time that the economic recovery was stable or had improved. In the latest results, 71% of respondents have little confidence about the broader economy, and believe it is likely to restrict the growth of their business over the next 12 months. 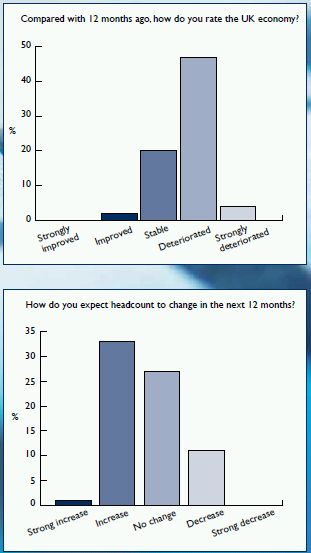 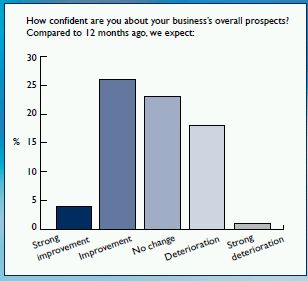