by Deloitte Sports Business Group
Deloitte
Your LinkedIn Connections
with the authors
To print this article, all you need is to be registered or login on Mondaq.com.

Welcome to the 18th edition of the Deloitte Annual Review of Football Finance, in which we analyse and comment on recent financial developments in the world's most popular sport. In this edition we again review recent trends and analyse the current situation in some detail, while providing forward looking insight.

We publish this year's edition amidst the gloomiest global economic environment for decades. The consensus among economic forecasters seems to be that the UK economy will decline by at least 4% in 2009, the most severe contraction in a single year since the Second World War, and other countries are expected to suffer a similar, or worse, fate. Despite a recent improvement in the 2010 outlook, football clubs face extraordinarily turbulent conditions.

The Premier League itself was born during the last recession in the UK. 1991/92 was the last season of the old First Division. Between 1992 and 2008 the UK economy experienced an extended bull run, growing at an average rate of 5.4% in nominal terms. By comparison the growth rates achieved by England's football leagues have been stratospheric.

The Premier League leads the way, its domestic and international profile reaching unprecedented levels and in turn driving the clubs' revenues upwards. Its clubs have transformed their stadia into state of the art venues, while the league now attracts the world's greatest players, who have attracted a new and increased fanbase, delivering a virtuous circle of growth. The collective revenues of the 20 Premier League clubs have grown at a compound annual rate of over 16% and in 2007/08 are now more than eleven times those of the then 22 clubs in 1991/92. Premier League club revenues now stand on the verge of £2 billion, an average of £100m per club. This is a telling reminder of football's extraordinary performance in revenue terms.

Meanwhile, Football League clubs have also performed strongly. With the difficulties of the ITV Digital episode now largely consigned to history, the Championship has resumed its path of steady growth which has seen annual revenue growth of almost 12%, while Leagues 1 and 2 have grown at around 10%. In almost any other industry this would be lauded as outstanding performance, and the Football League and its member clubs should be proud of how far they have come.

Despite revenues having grown so strongly, improved profitability has remained stubbornly elusive. In 1992/93, the first year of the Premier League, cumulative operating profits were £33m with 15 of the 22 clubs in the black. By 2007/08 operating profits stood at £185m with only 11 of the 20 clubs delivering a positive return. Despite the increases in revenue, the fiercely competitive nature of the league has seen potential profits quickly competed away, with operating margins falling from 16% to below 10%. For many owners, Premier League clubs represent 'trophy assets' with the potential to deliver a long term return but which at best break even annually, rather than a cash cow delivering an ongoing 'dividend'. 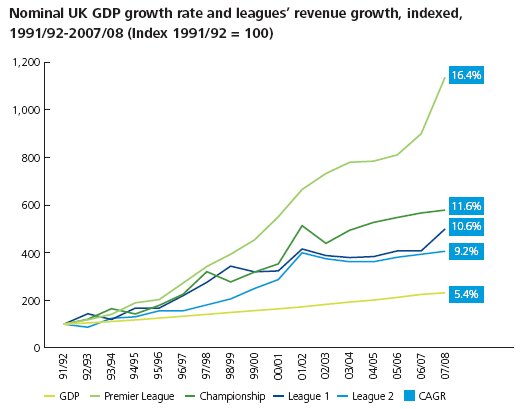 Clubs will face significant challenges in the short term to maintain current performance given the economic environment. Football is lucky, to date, to have been largely insulated from the economic downturn by the primarily seasonal nature of ticketing and corporate packages, but the summer renewal period is likely to present a significant stress test of demand. For larger clubs, playing to sold out stadia, with strong demand for corporate packages and wide commercial appeal, the impact may be limited. However, for smaller clubs, where demand is more variable, and where significant excess capacity exists, the downside may be more pronounced.

By the time the 2009/10 season begins in August many clubs will have a clear indicator of their overall performance. Price is one of the few variables over which clubs have complete control and clubs will have been carefully reviewing marketing and pricing strategies during the season. In an effort to boost sales, and perhaps to show solidarity with their key stakeholders, we have seen a change in policy almost across the board, with price freezes or even reductions commonplace for 2009/10.

Although conditions are likely to be difficult it is timely to remember that the fundamentals supporting the Game remain strong. Football occupies a key part of England's national identity and is deeply integrated into many people's everyday lives. Some emerging figures are encouraging – in the Football League, attendances exceeded 16m in 2008/09 for the fifth successive season and some clubs have reported strong demand despite disappointing on-pitch performances – Norwich City, for example, have sold over 18,000 season tickets for 2009/10 despite being relegated to League 1. We will monitor clubs' performances with interest as the summer develops.

Football remains a relatively inexpensive hospitality option compared to other one-off events and seasonal packages present a variety of individual opportunities. Furthermore, many corporate hospitality buyers are small businesses, fans in their own right who have 'traded up', rather than large enterprises which may have weaker brand loyalty.

Some comfort may come from a welcome boost to broadcasting revenues for many clubs – which may help to offset any impact on matchday and commercial revenues. Football League clubs will be looking forward to a new deal from 2009/10 at more than double its current value, while a new UEFA Champions League deal will bring benefits to the leading Premier League clubs. Looking further ahead, the value of live UK Premier League rights (for the seasons 2010/11 to 2012/13) increased by 4%, an excellent performance under the circumstances, with international deals – likely to show the strongest growth rates – yet to be concluded.

As we have seen in previous turbulent periods, there will be casualties. In 2009 we have already seen Chester City, Darlington, Southampton and Stockport County enter Administration, and there may be others to follow. Since 2004/05, clubs which have entered Administration receive Sporting Sanctions in terms of points penalties handed down by the Football League. In 2008/09 AFC Bournemouth, Luton Town, Rotherham United and the aforementioned Darlington and Stockport County all received points sanctions, while Luton also received further penalties in respect of other transgressions, which contributed to their relegation from the League itself.

While unfortunate, we do not feel that the penalties are unreasonable. Allowing clubs to enter/exit Administration without penalty could be seen as a form of financial 'doping' whereby a club could, theoretically, irresponsibly overspend in search of an on-pitch advantage, then, if that failed, clear its debts and emerge reborn and unscathed. This presents a clear challenge to the integrity of the competition, especially when other clubs may be working tirelessly to balance the books on an ongoing basis – even if that means putting a brake on their sporting aspirations. The sanctions present a realistic deterrent to unsustainable operating practices. We do not see how sanctions should be seen as a barrier to responsible inward investment, indeed their moderating impact on competitor behaviour may provide comfort to potential new investors.

In addition to the Football League's well publicised steps we are seeing further, if at times tentative, steps to enhance the Game's off-pitch image. In some cases these move beyond Sporting Sanctions towards the development and application of certain financial regulations, fit and proper person tests for club ownership and incentives in respect of the development of home grown players. We applaud these initiatives, which can only help the Game to further demonstrate its capacity to regulate itself and achieve common goals.

However, the challenges that the application of criteria on a supra national basis present should not be underestimated. Clubs competing in European competitions are drawn from a wide variety of countries with significant social, economic and legal circumstances, different accounting, financial reporting and auditing environments and wide ranging business cultures. The development of a centralised system of financial control may be more challenging to achieve in practice than in theory.

The chapters of this year's Annual Review cover all the key areas to form an overview of football's financial situation. In addition to our analysis of trends up to the end of the 2007/08 season, where possible we include pointers to prospective future performance. Europe's premier leagues provides a detailed review of current trends in European football. We then focus on the English situation, with the familiar Revenue and profitability and Club financing sections which form the core of our analysis of the domestic financial situation. Wages and transfers examines the primary area of expenditure for clubs while Stadia development and operations discusses a key area where English clubs continue to maintain a competitive advantage over their European neighbours. Sprinkled within the sections are a number of feature articles, where we discuss and comment on relevant topics and trends in the industry. The Appendices continue to provide the most comprehensive collection of financial, statistical and reference data available anywhere. It is often said that football is more than a game. On the opposite page in 90 minutes and counting we illustrate this using a snapshot of the wide-ranging impact of English football.

The Annual Review addresses clubs' business and commercial performance in financial terms and strives to provide the most comprehensive picture possible of English professional football's finances. The basis of preparation, and some notes on the limitations of reliance on published financial information, are set out on the inside front cover. Guidelines for interpreting the Appendices are provided on the inside front cover of that document.

A review of this nature cannot provide detailed answers to your football business issues. If a commercial, business, financial, tax or accounting issue arises, we suggest you consult professional advisers. Details for some members of our specialist Sports Business Group are set out on the back cover. All of us are dedicated to full time work in the sports industry and would be delighted to help you. More detail on our team, services and clients can be found at www.deloitte.co.uk/sportsbusinessgroup

We would like to thank all the clubs who sent us their accounts and, in England, The Football Association, FA Premier League and The Football League for their assistance. Outside England thanks are due to the Liga Nazionale Professionisti ('Lega Calcio'), Deutsche Fußball Liga ('DFL'), Ligue de Football Professionnel ('LFP'), Liga de Fútbol Profesional ('LFP'), Koninklijke Nederlandse Voetbalbond ('KNVB'), Pro League (Belgium), Österreichischer Fußball-Bund ('ÖFB'), Svenska Fotbollförbundet ('SVFF') and UEFA.