by Philip Wood
Allen & Overy
To print this article, all you need is to be registered or login on Mondaq.com.

Now that the financial crisis has spread its tentacles to ordinary corporations, is there a risk for directors of these corporations of liability for deepening the insolvency?  Is it possible to untangle the mess and keep out of trouble?

The liability for deepening an insolvency is a different shade from the general liability to govern in accordance with good governance standards and the statute.

Things used to be different.  In 1892 in England a director of the Cardiff Savings Bank was appointed to the board at the age of six months and attended only one board meeting in 38 years.  He was held by the court not to be liable for a negligent mismanagement that had occurred.

In those days, the law believed in companies, the new creation.  Sure, companies were thought of long before the 1800s – for example, the Roman societas, the English and Dutch East India companies.  But companies really took off in the 1800s as a means of enterprise.

Time does not synthesise the law.  Time accumulates the law.  It piles it up.

Large groups have subsidiaries all over the world.  They have local companies because of the desire to insulate the local business and the rest of the group as a whole, because the host government insists, because management is easier, because it is a joint venture, because they might want to sell, because they want central treasury functions.  All these and other good reasons.  Some groups have thousands of subsidiaries.  The consolation is that there is a maximum of only about 320 jurisdictions to cope with.

These jurisdictions do not have the same view about director liability in the twilight.  The law of a subsidiary's jurisdiction could be different from the law of the parent's jurisdiction so that common directors could be held to different standards.  The rules have been built on successive bouts of failures so that now, after a century or so, the hubbub of menacing strictures is deafening.  Time does not synthesise the law.  Time accumulates the law.  It piles it up.

Broadly, where we have got to is that there are around seven classes of liability risk for directors in the context of insolvency:

These liabilities can spread to the so-called de facto or shadow directors – said to be puppet-masters, string-pullers, interlopers, usurpers.  This is seen by some as a useful way to have a go at banks and controlling holding companies and shareholders on big pocket principles.  In Austria even the government as shareholder has been held liable for interference in management.  Also, insolvency is not a good time to be a company doctor.  Just when the doctor is needed because the patient is sick, the law punishes the doctor.  Ireland has a specific exemption.

The map below, Director liability for deepening insolvency, shows a tentative grading of legal systems on some of these issues.  This map is broadbrush, but one has to start somewhere.

The U.S., and Canada as well, firmly reject the idea that directors should be liable for deepening the insolvency.

A remarkable aspect of this map is that the U.S. – and Canada as well – firmly reject the idea that directors should be liable for deepening the insolvency – an approach recently confirmed in the U.S. in the Parmalat case in New Jersey, following ample precedent.  They reject the policy that directors should be aggressively disciplined in this way, that they should be incentivised to stop early.  That is why companies in the U.S. can carry on much longer than they can in many other countries.  They uphold the view that directors should not be chilled into premature closure, that wrong business judgements should not effectively be criminalised.  They appear to think that people should be encouraged to be directors, and that the veil of incorporation should be honoured.  Plain crazy, or plain common-sense?

What practical advice can one give if things are gloomy?  The directors should make sure that financial information is up-to-date and increase its frequency and detail.  Directors' duties to creditors intensify.  The board should get independent advice from doomsday experts – advice on what the local duties are (especially duties to file), on what practical steps to take, on what the disclosure duties are to markets.

Boards of companies which are vulnerable to a credit cut-off should be thinking about Plan B.  They should recognise in particular how the law protects pensioners and employees.  The finance staff should ensure that tax and social security contributions are paid over promptly.  Banks can inform the company of their intentions, but not deliver instructions or take over management.

Treat group companies at arm's length.  There should be an absolute ban on self-interested transactions and self-dealing of any kind.  Check directors' and officers' insurance – for what it is worth.  Record decision-making – although some U.S. litigators discourage this.  Foreign directors may have a duty to supervise local management.  In many countries boards are collectively responsible.  If the company is actually insolvent, then, amongst other things, preferential payments outside the ordinary course could be dangerous.

In addition, work 48 hours a day, do this, do that, know everything, predict the future.

The bright side is that the financial crisis is an external event, obviously not brought on by the fault of the directors of ordinary corporates.  If the past is clear, then there is only the future to think about.

Maps are from his Maps of World Financial Law (Sweet & Maxwell, 2008). 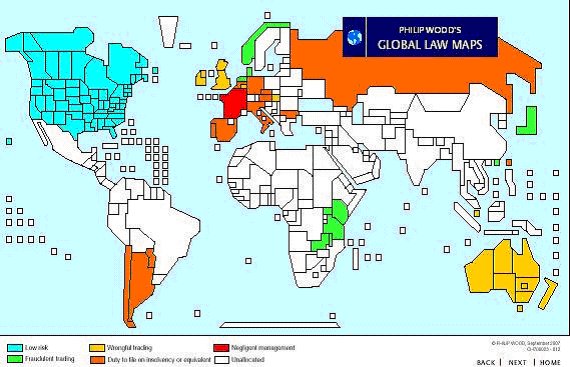 ARTICLE TAGS
UK Corporate/Commercial Law Directors and Officers Insolvency/Bankruptcy/Re-structuring Insolvency/Bankruptcy
POPULAR ARTICLES ON: Corporate/Commercial Law from UK
UK Government Announces Commitment To Significantly Increase Modern Slavery Act Reporting Requirements
Ropes & Gray LLP
On September 22, the UK Government published its response to the 2019 public consultation on the Modern Slavery Act. In the response, the Government indicated it is "committing to an...
The Power Of The Minority: Five Rights That Every Majority Shareholder Should Be Aware Of
MJ Hudson
In this article we focus on some of the rights held by minority shareholders of a company incorporated in the UK, and how they can impact on the influence wielded by majority shareholders.
Former Academy Trust CEO Barred From School Management
Wrigleys Solicitors
As a former academy trust CEO is barred from school management, we look at the lessons that can be learned.
Charities And Coronavirus: Extension Of Some Measures Brought In By The Corporate Insolvency And Governance Act
Withers LLP
In a welcome move, the Government has announced that some of the measures brought in by the Corporate Insolvency and Governance Act will be extended.
Founders: How To Prepare For The Unexpected And Protect Your Business Investment
Taylor Vinters
The high profile departure from Instagram of founders Systrom and Krieger (following a dispute with Facebook about the app's future direction) was a stark reminder of the conflicts that ...
The Basics: How Can I Vary A Contract?
Gowling WLG
In the whirl of business, written agreements sometimes fail to track commercial developments; and when disputes then arise, parties may find that their contracts do not say what they thought they did...
FREE News Alerts
Sign Up for our free News Alerts - All the latest articles on your chosen topics condensed into a free bi-weekly email.
Register For News Alerts
Article Tags
UK Corporate/Commercial Law Directors and Officers Insolvency/Bankruptcy/Re-structuring Insolvency/Bankruptcy
Related Articles
Nautica Marine Limited -v- Trafigura Trading LLC [2020] EWHC 1986 (Comm) Hill Dickinson
Trusts: When Might You Want To Reserve Powers? Part II Withers LLP
European Commission Announces New Policy To Accept Member State Referrals For Merger Review Even If EC And National Thresholds Are Not Met Cleary Gottlieb Steen & Hamilton LLP
European Private Equity M&A: October Market Snapshot Cleary Gottlieb Steen & Hamilton LLP
Companies House Reform: What Will It Achieve? BCL Solicitors LLP
Mondaq Webinars
Global Investigations During the Covid 19 Pandemic
The Law Offices of Panag & Babu
Webinar New Delhi India
Patent Filing, Prosecution, and Enforcement in India
LexOrbis
Webinar New Delhi India
More Webinars
Comparative Guides
Anti-Corruption & Bribery
Banking Regulation
Blockchain
Cartels
Corporate Tax
Mondaq Advice Centres
UK
Coming to and Investing in the UK
Global
Investment Immigration
Global
Trademarks in SAARC Countries
More MACs
Curated Content
A Different Perspective To Employer`s Liability For Anti-Competitive Behaviors: Arçelik's Application For Leniency
ELIG Gürkaynak Attorneys-at-Law
Losing The Battle, Winning The War? – Ramifications Of The Newly Introduced Settlement Mechanism Under Turkish Competition Law
ELIG Gürkaynak Attorneys-at-Law
Upcoming Events
Mondaq Social Media