WeWork first filed its prospectus on August 14th 2019. Two main components of the filing prompted investor backlash. First and foremost, investors were alarmed at WeWork's consecutive and increasing financial losses over the past three years. Secondly, investors took note of the company's unusual governance practices. Although a justification could be provided for the financial losses, namely that they were essential to their growth strategy, no justification could be provided for the latter. With lazy governance practices increasingly linked to poor company performance, WeWork responded by making sweeping changes to assuage concerns.

Gender diversity on boards has become a prominent issue in recent years. Some major investors, such as Blackrock, have even updated their voting guidelines to try and work towards a more equal representation. In light of this, investors were surprised and disappointed when WeWork's initial filing included seven board members, all of which were male. In response, WeWork quickly recruited renowned culture coach Frances Frei to their board.

Frei earned her reputation when she was hired by Uber to help fix their " Bro Culture". Although this a step in the right direction, WeWork might benefit from adding more women to their portfolio of directors. Using CGLytics data and intelligence a trendline can be made, in the S&P 500 real estate industry, between the percentage of women on boards and a company's Average 1-year Total Shareholder Return (TSR). 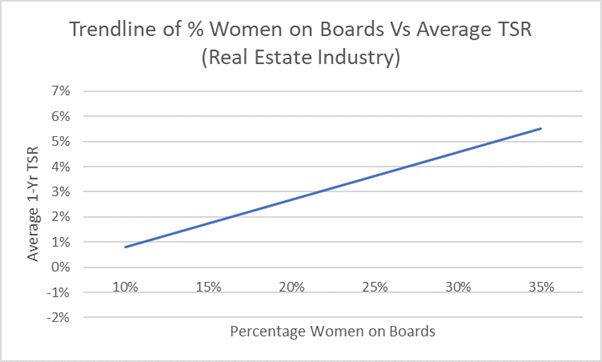 CGLytics' data and analytics are trusted and used worldwide by Glass Lewis, the leading independent proxy advisor, as a basis for their research on companies

Also included in WeWorks initial filing were plans to award the company's founders and early investors 20 votes for each share of Class Stock. This would grant unchecked power to the CEO. Moreover, in the event that the Chief Executive Officer, Adam Neumann, would become incapacitated, then his wife, Rebekah Neumann, and two directors would decide who the successor would be.

This plan has subsequently been scrapped and been replaced by a more contemporary policy where the Board of Directors holds the power to pick a successor. In regard to the voting rights, the number of votes for each share of Class A stock will now only account for 10 votes each.

WeWork has had a tumultuous build-up to their IPO. Many investors were hesitant to back the company as their corporate governance policies did not meet their standards. WeWork is just one example of many where Corporate Governance plays an integral role in the health and viability of a company, especially when third parties are involved.