On 29 August 2017, the UK Government published its response to the green paper on corporate governance reform that it issued at the end of November 2016. It intends to implement its reform proposals — so that they apply to accounting periods starting after June 2018 — by a mixture of secondary legislation and changes to the UK Corporate Governance Code (the "Governance Code") coupled with the preparation of new guidance and certain other initiatives in related areas. Except for foreign premium-listed companies which may be affected by the Governance Code changes, the reforms (including the CEO pay ratio reporting) will only apply, to differing extents, to UK-incorporated companies.

A copy of the Government's response (issued by the Department of Business, Energy & Industrial Strategy ("BEIS")) is available here. A table summarising how these reforms will affect different types of companies is included at the end of this publication.

Although the Government claims the reforms comprise a "world-leading package of corporate governance reforms," with the exception of the mandatory reporting of the ratio of CEO pay to the average pay of the company's UK (not worldwide) workforce and a proposed new Governance Code requirement that companies adopt (or explain why they have not adopted) one of three mechanisms for enhancing the voice of the workforce at board level, they largely involve incremental development of existing principles of corporate governance. To that extent, many companies may feel that most of these reforms do not represent a serious challenge to their existing governance processes, although it is notable that most of the negative response to the Government's green paper came from companies likely to be affected by the reform proposals, and many companies will be concerned about the amount of yet more corporate governance reporting that will now be required. This may be particularly the case for those large privately-owned UK companies that, even if they voluntarily choose to make some disclosure about their internal governance arrangements, are not currently subject to any mandatory or "soft law" corporate governance regulation. Under these reforms, they would have to start disclosing their corporate governance arrangements.

There are three main areas covered by the reforms:

The Government's response also discusses other possible reforms, including strengthening the supervisory powers of the Financial Reporting Council (the "FRC") with respect to corporate governance reporting.

Finally, the Government has said that it will not currently be acting on two key recommendations from the BEIS Parliamentary Committee in relation to diversity issues, that:

In relation to the women targets, the Government prefers to maintain the focus on achieving the Davies Review target that by 2020, 33% of FTSE board members and 33% of executive committees and their direct reports should be women. In relation to diversity reporting, the Government prefers to keep a voluntary approach, underpinned by the work that is being done by the Sir John Parker and Baroness Ruby McGregor-Smith reviews and recommendations and by the new Government-sponsored Business Diversity and Inclusion Group.

The headline reform in this area will be the mandatory disclosure in a quoted company's directors' remuneration report1 of the ratio of CEO pay to the average pay of the company's UK workforce, plus a narrative explaining changes to the ratio from year to year and how the ratio relates to pay and conditions across the wider workforce.

This reform has been much debated and criticised since it was first proposed, with the so-called "Goldman Sachs/Waitrose supermarket" flaw being commonly voiced – the pay ratio for the CEO of a company like Goldman Sachs may appear much less extreme, because of the generally high level of pay of much of the company's workforce, than that of a supermarket company (say) where the pay of much of the workforce working on the shop floor, etc. will be considerably less than that of the CEO. This may well create a misleading and unhelpful impression of the significance of a company's executive remuneration. Not surprisingly, 75% of quoted companies commenting on this proposal were opposed to it.

The ratio will be calculated by reference to UK employees only and will be based on the CEO's total annual remuneration (i.e. the "Single Figure" required to be set out in the directors' remuneration report). Hopefully, at least for this ratio reporting, there will not be the potential uncertainty that there is in relation to the UK's Gender Pay Gap Regulations2 with regards to non-UK employees. That said, multinational companies will, of course, be free to publish, in addition to the "UK ratio," a broader ratio covering non-UK employees as well.

This new CEO pay reporting requirement will sit alongside the existing requirement – in place since 2013 – for the directors' remuneration report of UK "quoted" companies to have to disclose the annual increase in CEO pay over the previous year when compared to the annual increase in the average pay of the entire workforce. However, in contrast to the proposed CEO pay ratio disclosure, currently a company can use a different comparator group of employees in relation to this "annual increase" disclosure if it considers the comparator of all employees inappropriate. The company must then explain why that different group has been chosen.

The Government also proposes to introduce, by means of secondary legislation, a requirement that quoted companies provide a clearer explanation in their remuneration policies (which, under UK law, have to be approved by shareholders by simple majority vote) of the range of potential outcomes from what the Government and many others now regard as the increasingly complex shared-based incentive schemes that companies typically adopt as part of the remuneration package for senior executives.

Greater Employee and Other Stakeholder Input at the Board Level

Employee Input to the Board

Before the Government's green paper was published, there had been much discussion about the possibility of the UK introducing a requirement, seen in some other jurisdictions, for a "worker-representative director" to be appointed to company boards. The green paper instead proposed that companies should adopt one of three possible "employee/other stakeholder-engagement" mechanisms to help give the workforce and other stakeholders (customers or suppliers, for example) greater input at board level: (i) certain of a company's existing non-executive directors to be designated as responsible for ensuring that stakeholders' voices are heard by the board, (ii) the creation of a stakeholder advisory panel, and (iii) the appointment of individual stakeholder representatives to the board.

The Government's response summarises the various concerns that these possibilities were seen as having – for example, their potential to create conflicts of interest, the difficulties of selecting the right individuals to take on this role and the negative impact they could have on the unitary nature of UK boards and their effective functioning.

The Government has nevertheless decided to ask the FRC to consult on the inclusion in the Governance Code of a new requirement for premium listed companies to adopt, on the Code's "comply or explain" basis, one of three employee-engagement mechanisms – i.e., a designated existing non-executive director, a formal employee advisory council or a director from the workforce.

Other Stakeholder Input to the Board

More generally, the Government proposes strengthening the engagement of stakeholders with companies by a number of other related disclosure and guidance measures. Engagement with stakeholders by UK companies is something the Companies Act 2006 recognises by requiring directors to have regard to the interests of various non-shareholder stakeholders (such as employees, customers and suppliers, etc.) when carrying out their primary statutory duty to act in a way that promotes the success of their company (the so-called "section 172 duty").

A potentially significant reform that is proposed will require, by means of secondary legislation, private and public companies with (in the Government's initial view) at least 1,000 employees to disclose how their directors have complied with their section 172 duty, with regards to employee and other stakeholders' interests. The Government says that this new requirement will be subject to further consideration and so it is difficult to be certain at this stage how onerous or difficult it may be for companies to provide this sort of disclosure. The Government does, however, say that it envisages that the disclosure would involve explaining how key stakeholders have been identified, how their views have been sought, why the company's engagement mechanisms were considered appropriate and how the information obtained from them influenced the board's decision-making.

While some large private companies may voluntarily choose to adopt and follow and even give some publicity to the type of corporate governance regime they operate (in addition to disclosing their corporate social responsibility programmes and, as applicable, reporting in accordance with the Guidelines Monitoring Group's guidelines for enhanced disclosure by portfolio companies and private equity firms, for example), none of this is mandatory.

The Government's reforms would change that by requiring, by means of secondary legislation, all companies (including private companies) with, in the Government's initial view, at least 2,000 employees, to disclose their corporate governance regime in their directors' report and on their website. For private companies with 1,000 (or more) employees this would be in addition to the reporting on how they have discharged their section 172 duty mentioned above. Significantly, the Government has said that it will also consider extending this requirement to limited liability partnerships. Since the employee threshold does not seem to be limited to UK employees, this could include certain large professional services firms.

The Government is also asking the FRC to work with various others, including the Institute of Directors, the Confederation of British Industry and the British Venture Capital Association, to develop a new voluntary set of corporate governance principles for large private companies.

The Government estimates that allowing for exemptions for large companies already required to report against the Governance Code or subject to corporate governance disclosure under the FCA's Disclosure Guidance and Transparency Rules, about 1,400 companies could become subject to these new requirements.

The FRC will be consulting on some of these proposals as part of its review of the Governance Code, in the next few months. The work on developing a set of corporate governance principles for large private companies will also start in the autumn. BEIS will be publishing the necessary draft secondary legislation before March 2018 and consulting on that "where necessary." The intention is that the reforms now proposed should apply to company reporting years starting after June 2018.

Finally, the Government has also stated that it will be announcing shortly details of the review it has said it will carry out in relation to the use of share buybacks by companies, including to ensure that they cannot be used artificially to influence performance targets and so inflate executive pay.

How the Changes Will Apply (or not) to Different Companies 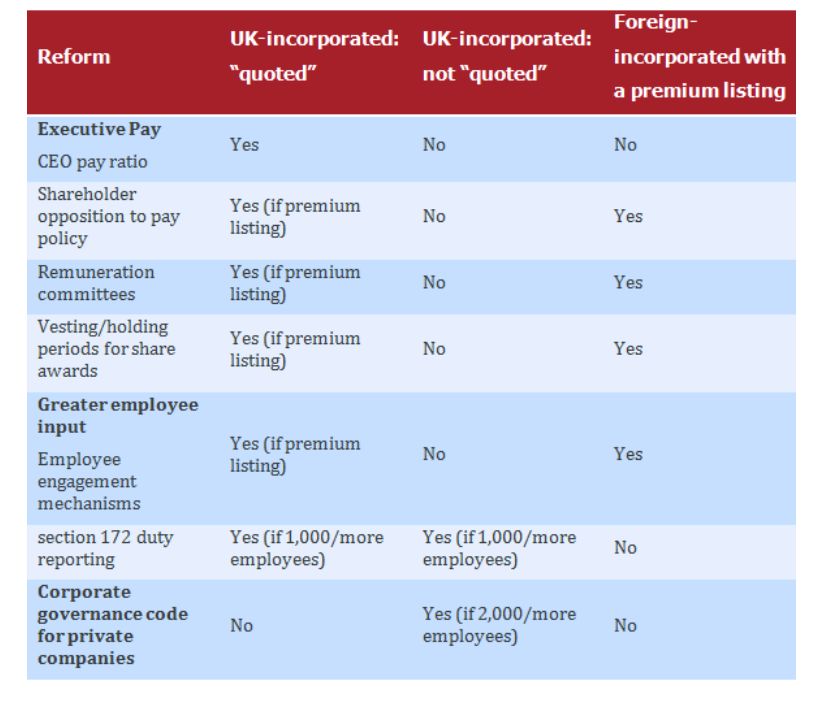 1 This forms part of the annual reports and accounts of a UK company that has equity share capital either officially listed in the UK (or another EEA state) or traded on NYSE or NASDAQ.