by Deloitte Audit Group
Deloitte
Your LinkedIn Connections
with the authors
To print this article, all you need is to be registered or login on Mondaq.com.

2012 is a big year for the UK, with the Diamond Jubilee, the Olympic and Paralympic Games and the continuing economic challenges. For preparers of half-yearly financial statements, it should be a relatively quiet year with only one amended accounting standard to admire and to implement. Flurries of activity from government, regulators and standard setters may result in further amendments to consider. But, for the moment, the forecast is fair. So, after devoting some time to those big 2012 stories, the theme in reporting will be polishing previous periods' precedents to produce perfect, or at least perfectly acceptable, publications. Unlike that sentence, some things are easier said than done. The third finding requires a little more explanation.

The aim of this Deloitte annual publication is to help those preparing and approving half-yearly financial reports by providing:

As with other Deloitte corporate reporting surveys, the population is split between investment trusts (see Section 7) and corporates. For corporates, the most interesting findings are around going concern disclosures. In 2010 the revised UK Corporate Governance Code introduced the provision, at C.1.3, that directors should report in their half-yearly financial statements that the business is a going concern and should provide supporting assumptions or qualifications as necessary. In 2011, the Financial Reporting Council announced its inquiry, led by Lord Sharman, into going concern and liquidity risk (the final report originally being expected at the end of February 2012). Prompted by this change and this interest, it might have been expected that the survey results would be one directional. There would be more from more companies. But this is not the case.

The third finding requires a little more explanation. Auditors' reviews are not mandatory but 68% of companies now choose to include such. That means that for the other 32% of corporates in the sample there can be no auditors' amber ﬂags, being those easily spotted emphasis of matter paragraphs. There may be significant going concern uncertainties in some of these companies. What is clear is that economic challenges continue.

The other main findings include that:

Finally, only 13% of corporates and 3% of trusts clearly complied with all of the requirements for the interim management report, being the narrative element of the half-yearly financial report.

Put together, all these findings indicate that opportunities abound for polishing the 2012 reports.

The requirements stem from section 4.2 of the Disclosure and Transparency Rules (DTR) contained within the Financial Services Authority (FSA) handbook. The UK Listing Authority (UKLA) has periodically issued additional guidance to clarify the requirements of the DTR.

A half-yearly financial report should cover the first six months of the financial year. It should contain, as a minimum, a condensed set of financial statements, an IMR and a responsibility statement, each of which is discussed in further detail below.

Timing of half-yearly reporting and dissemination of information

The half-yearly financial report must be published within two calendar months of the end of the six-month period and disseminated in unedited full text (including the auditor's review report where applicable) via RIS2. The UKLA has clarified this requirement, noting that inclusion of required information on a company's website but not in a RIS announcement is not considered to fulfil the requirements of the DTR3.

Further clarification was offered in March 2009, with the UKLA making clear that a link to a PDF is not considered an acceptable method of disseminating regulated information4. The announcement relating to the publication of the half-yearly report must also include an indication of which website the document is available on.

The IMR is the narrative report which includes, as a minimum:

The following information on related party transactions should be disclosed in the IMR:

There is, perhaps, a lack of clarity around the latter requirement. There may be few instances of a change in a previously reported related party transaction which would not in itself be a new transaction (and therefore already be disclosed under the first point above). An example of such a situation may be sales made to a related party in the previous financial year where the absence of these in the current period has had a material impact on the group's financial performance. Given this apparent ambiguity, it may be advisable for companies either to give comparative information from the last annual report for any material related party transactions or to state explicitly that no such changes have occurred.

Each person making a responsibility statement must confirm that to the best of his or her knowledge:

UK companies preparing consolidated or single company financial statements under IFRSs should prepare their half-yearly condensed set of financial statements in accordance with IAS 34 'Interim Financial Reporting'7. An illustrative half-yearly financial report in accordance with IAS 34 and the DTR is included in Appendix 1 and a disclosure checklist containing all the requirements is in Appendix 2 to this publication.

UK single companies which continue to report under UK GAAP should follow the ASB statement 'Half-yearly financial reports'. The DTR requirements for non-IAS 34 condensed financial statements8 are set out below.

The DTR 4.2 requirements outlined above apply in full to companies with shares listed on a regulated market. Other companies may also be required to follow these requirements. A summary of the application of DTR 4.2 and the AIM Rules for Companies is provided in the table opposite. 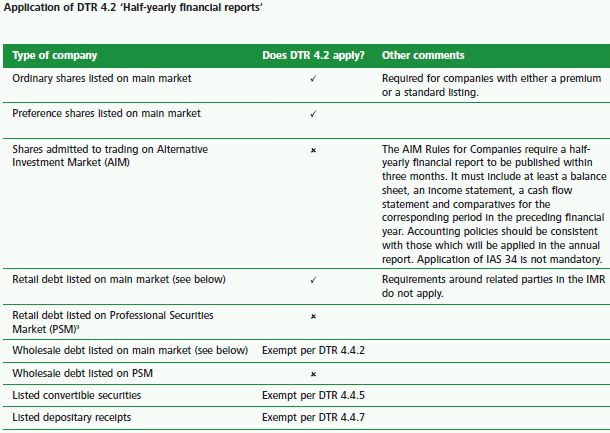 1 Going concern and liquidity risk: Guidance for directors of UK companies 2009. Available at www.frc.org.uk/press/pub2141.html. Guidance on half-yearly financial reports is included in paragraphs 47-50 and 86-88.

7 Companies may choose to prepare full financial statements in accordance with IFRSs. However, this is not common UK practice.

9 The PSM is a non- regulated market for listed debt of any denomination. It is Listed for the purpose of the Listing Rules.