A market study focusing on the conditions of competition in relation to investment and corporate banking services has been launched by the UK Financial Conduct Authority ("FCA"). The study will cover services provided in the United Kingdom, but the FCA's findings could reverberate more widely in view of the international significance of the UK banking and financial sectors.

If the FCA concludes that competition is not working well, it may impose market-wide remedies, firm-specific remedies, or make a market investigation reference to the Competition and Markets Authority ("CMA").

The market study will focus on the following three topics, in respect of primary market and related activities:

(i) Choice of banks and advisers – namely, the competitive landscape generally, clients' purchasing behaviour and in particular the impact of syndication, and entry and expansion including the potential effects of regulation.

(ii) Limited transparency – namely, adequacy of information, transparency of the process of allocation of debt or equity, and the impact of established practices, processes or regulations on transparency in the IPO process.

The UK financial markets have been under close scrutiny since the financial crisis of 2008. Since then, a broad range of actions has been initiated, resulting in the imposition of sanctions on firms and individuals.

Following preparatory steps taken in 2014 and early 2015, the FCA announced on 22 May 2015 its decision to launch a market study into investment and corporate banking services.

The FCA has invited interested parties to submit comments by 22 June 2015 on the issues identified in the terms of reference of the study, and also intends to host a number of roundtable and/or bilateral meetings with interested parties.

The FCA aims to publish an interim report setting out any concerns identified by it, as well as any proposed remedies, and to publish a final report in the Spring of 2016.

The diagram below provides a (non-exhaustive) summary of the scope of the market study: 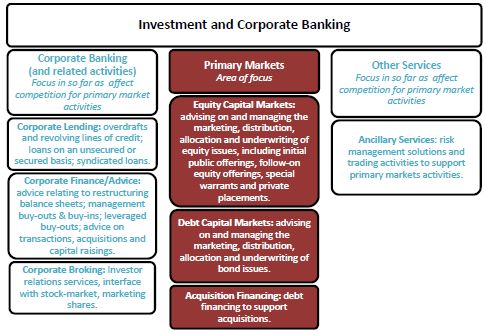 The FCA wishes to hear from a wide range of firms with different business models and client profiles, including firms which provide a combination of both investment and corporate banking services, standalone investment banks which offer services such as underwriting securities and trading and brokerage services, corporate banks that are deposit takers and loan makers for corporate and large businesses, boutique investment banks that specialise in a specific service client type or industry, and advisers.

What can the FCA do?

The FCA has launched the market study on the basis of its powers under the Financial Services and Markets Act 2000 ("FSMA"). It might instead have used its new "concurrent powers" under the Enterprise Act 2002, which it acquired on 1 April 2015, namely the power shared with the CMA and other sector regulators to apply UK competition law. A consequence of using its FSMA market study powers is that the FCA is not bound by a statutory timetable.

If the FCA concludes that competition is not working well, it may intervene to promote effective competition using a number of possible measures. These include rule making, publishing general guidance and proposing enhanced industry self-regulation.

The FCA could also impose firm-specific remedial measures such as own initiative variation powers or own initiative requirement powers, cancelling permissions, public censure, imposition of financial penalties, and filing for injunction or restitution orders. Alternatively, it could make a reference to the CMA for an in-depth

What can you expect if your firm's activities fall within the scope of the market study?

The FCA will shortly begin to gather information and will therefore be seeking data, information and/or views from firms whose activities fall with the scope of the investigation.

The FCA may ask firms to submit information on a voluntary basis, or it may use its formal information gathering powers under FSMA. It may also share information and co-ordinate with other authorities, such as the Prudential Regulation Authority and CMA.

Responding to the FCA's information requests may be burdensome, and care will be required in the preparation of responses.

Many of the activities falling within the scope of the market study have not previously been subjected to detailed scrutiny by the UK competition authorities, and conduct that may have been viewed as normal market practice for many years may be called into question.

The FCA is unusual among the world's financial sector regulators in enjoying full competition enforcement powers in addition to its regulatory powers. As well as the various forms of intervention referred to in the previous section, the FCA could also use information gathered by it in the exercise of its regulatory powers to enforce the competition rules against individual companies.

The launch of the market study is also a timely reminder of the need for firms to ensure that their practices, documentation and compliance procedures are in line with the requirements of UK and EU competition law.

ARTICLE TAGS
UK Anti-trust/Competition Law Antitrust, EU Competition Finance and Banking Financial Services
POPULAR ARTICLES ON: Anti-trust/Competition Law from UK
European Commission Publishes New Wide-Ranging Rules To Regulate Digital Markets
Rosenblatt Solicitors
On 15 December 2020, the European Commission published its much-heralded legislative proposals to regulate digital markets.
Distributor, Agent Or Both? The Commission's Working Paper On "Dual Role" Agents
Bristows
To that end, the Commission recently published a Working Paper setting out the current guidelines on so-called "dual role" agents.
Up Next, More "Killer Acquisition" Reviews At The EU? - New Policy To Catch Transactions That May Create Competition Concerns, Even If They Do Not Meet EU Or National Merger Control Thresholds
WilmerHale
On March 26, 2021, the European Commission (EC) published the findings of its recent evaluation of procedural and jurisdictional aspects of European Union (EU) merger control.
Which? Takes On Qualcomm With Claim For UK Consumers – A Guide To The Legal Challenges Ahead
Bristows
Which?, the UK consumer organisation, announced on 25 February that it is bringing a claim in the Competition Appeal Tribunal against chip manufacturer Qualcomm on behalf of UK purchasers.
UK Competition And Markets Authority Blocks Crowdcube And Seedrs Merger
Duane Morris LLP
Crowdcube and Seedrs today announced that they have terminated their proposed merger (Crowdcube and Seedrs abandon merger during CMA investigation).
Aspen Pricing Commitments Accepted By European Commission – An Outlier Or The ‘new Normal'?
Bristows
The European Commission has accepted Aspen's commitments to reduce its prices in Europe for six cancer medicines by 73% on average.
FREE News Alerts
Sign Up for our free News Alerts - All the latest articles on your chosen topics condensed into a free bi-weekly email.
Register For News Alerts
Article Tags
UK Anti-trust/Competition Law Antitrust, EU Competition Finance and Banking Financial Services
Related Articles
CLIP Of The Month: CMA Report On Algorithms And Consumer Harm Bristows
UK Digital Regulation Cooperation Forum Sets Out Its Agenda For 2021/22 Mayer Brown
EU Member State COVID-19 Recovery Plans Must Comply With State Aid Rules Jones Day
Podcast: Restrictions Of Competition ‘By Object' – What Does This Mean And Why Does It Matter? Bristows
Deutsche Telekom/Slovak Telekom – CJEU Clarifies The Scope Of Bronner And The Law On Refusal To Supply Bristows
Mondaq Webinars
The Impact of COVID-19 on the Energy Industry and the Resolution of the Attendant Disputes
Dorothy Ufot & Co
Webinar Lagos Nigeria
World IP Day – Top Patent Cases of the year 2020 in Turkey and UK Perspective
Gun + Partners
Webinar Istanbul Turkey
More Webinars
Comparative Guides
Anti-Corruption & Bribery
Banking Regulation
Blockchain
Cartels
Corporate Tax
Mondaq Advice Centres
UK
Coming to and Investing in the UK
Global
Trademarks in SAARC Countries
Global
Investment Immigration
More MACs
Upcoming Events
Mondaq Social Media