European Union: Fundraising For Opportunities Ahead

Reflective of wider global trends, the European alternative investments industry continues to grow and attract investors. The latest data, released this month by Invest Europe, shows that fundraising increased by 6% in 2019 to €109 billion1 - just €3 billion less than at the highest point in 2007, with capital being attracted across strategies - including credit, buyouts and venture capital.

Last year's high fundraising total was achieved against a backdrop of Brexit uncertainty and faltering economic growth in major economies, including France, Germany, Italy and the UK. It also coincided with the highest ever private equity deployment - €94 billion, a 10% increase on 20182.

This year there is even greater uncertainty and dislocation brought about by the impact of the coronavirus pandemic, which is severely impacting company performance and deal activity (see Market Snapshot). However, alternative investment firms are getting ready for the opportunities that will follow the crisis, bringing forward and accelerating fundraisings for the deals to come.

After a number of strong years for fundraising, firms are sitting on sizeable reserves of dry powder for investments. Data provider Preqin put the global total (excluding real estate, infrastructure and private debt) at over $1.4 trillion3 at the end of December. According to Preqin data (published by Be Beez4) buyout and venture capital dry powder for Europe was $265 billion (€240 billion) as of late March 2020, which equates to about 2.5 years of investment at the current level.

However, with memories of the period following the global financial crisis, both GPs and LPs know that funds able to deploy capital during a period of widespread dislocation following a significant economic shock are likely to produce some of the best returns of the cycle. As a result, many sponsors, including those that have significant levels of dry powder, are bringing forward fundraisings, accelerating processes and compressing timeframes to ensure that they have committed capital available for future investments.

Strategies tailored to a market downturn have been doing particularly well. In Europe, investment group ICG raised $2.4 billion for its third Strategic Equity Fund, well above its target of $1.6 billion5 making it one of the largest completed fundraisings in Europe of the first quarter. The fund is focused on GP-led secondary transactions which are expected to rise strongly as sponsors hold on to assets for longer.

Others with broad mandates for distressed investments, opportunistic deals or other special situations stemming from dislocations in credit and equity markets are also coming to the market. Apollo is looking to raise $20 billion across several funds, Oaktree is seeking $15 billion, while Blackstone's GSO unit is targeting $7 billion6, according to reports. CVC is also reported to be preparing a ?20 billion flagship fund7.

Concerned with a potential blockage in LPs' ability to make commitments during a downturn in the cycle, a number of sponsors had the foresight to raise funds over the past several years during a stable fundraising environment. In the past few months, we have seen investment firms that raised such so-called "contingency" or "rainy day funds" now activating those vehicles. Centerbridge, for instance, turned on its $3 billion opportunistic fund targeting US and European credit opportunities in March8. 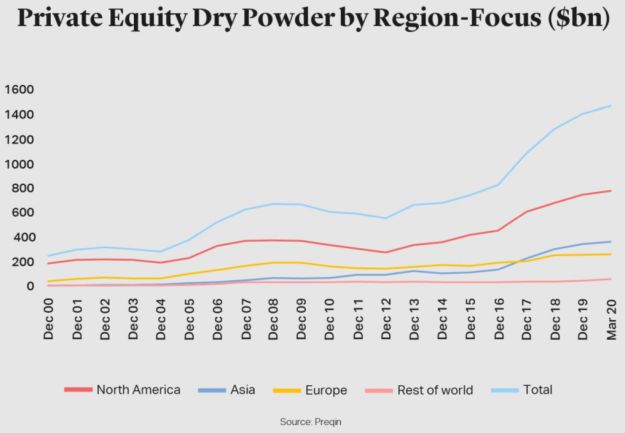 While GPs are eager to raise capital and many investors want to commit, there are nevertheless pressures. A slowing of distributions from private equity exits, the denominator effect and liquidity squeezes could restrict investment capital and lead some LPs to slow the rate of commitments. Sweden's EQT launched its ninth fund in January with a €14.75 billion target but warned late last month that the fundraising process could slow due to the conditions9.

However, with overall demand for alternative allocations still high (particularly among sovereign wealth funds and other large institutional investors), GPs have been able to maintain favourable fees and terms. As always, size does count, with LPs committing significant cheques able to access better terms, often through bespoke structures. In recent fundraisings, we have seen many of the largest LPs push further and seek to guarantee participation in prized co-investments to further turbocharge their deployment during the next 12 to 36 months.

Whilst for the largest sovereign and institutional investors liquidity has not been a significant issue, there is a growing concern in the industry that, in contrast, some high net worths and family offices that rely more heavily on distributions from their alternative investments to provide liquidity have been looking to avoid capital calls.

Although during the last eight years of relative economic stability LP defaults have been relatively few and far between, when they do happen, they put pressure on other investors to make up the shortfall. The concern that the trend might accelerate is leading growing numbers of larger LPs to ask for legal protection to insulate themselves from "overcalls" and other potential exposure to the effects of other LP defaults.

Another solution for GPs is to extend the terms of their subscription lines of credit. By doing so they give themselves greater scope to smooth capital calls for LPs, while ensuring more capacity to continue investing into what could be some of the most attractively-priced deals of recent years.

4. Private equity and venture, in Europe dry powder is up to 265 bn $. Preqin says in a private capital report for BeBeez.
Source: BeBeez