Under German tax law, remunerations paid abroad by persons/companies resident in Germany for the "temporary" transfer of rights/grant of exploitation rights are subject to German withholding tax ("WHT") of 15.825%. No WHT applies in cases where such rights are transferred/granted "permanently."

According to the controversial opinion of the German tax authorities, copyrights/exploitation rights that are subject to German copyright law cannot be transferred/granted "permanently" from a German tax perspective.

In its decision dated October 24, 2018, I R 69/10, published on April 17, 2019, the German Federal Fiscal Court (Bundesfinanzhof, "BFH") confirmed the view of the German tax authorities. The BFH decided that even if exclusive exploitation rights, not limited in terms of content, time or place, were granted for a copyright against payment of a one-time lump sum (total buyout), such payments would generally remain subject to WHT.

This decision applies in all cases where the contracting parties agree that the underlying total buyout agreement is to be governed by German law. However, WHT may also apply if the parties choose to apply the laws of another jurisdiction that permit the permanent transfer of a copyright from a German tax perspective. The parties should consider the WHT exposure when entering into the underlying agreement and examine whether the WHT rate can be reduced under a Double Taxation Agreement, upon application to the German tax authorities.

Remunerations paid by German residents to foreign right holders for the "transfer of rights or the right to use rights" (including copyrights/exploitation rights for a copyright) are generally subject to WHT of 15.825% (including solidarity surcharge). The German remuneration debtor must deduct the WHT from the gross amount of the remuneration and pay the WHT to the German tax authorities. The WHT rate amounts to 18.8% if the foreign right holder is entitled to a net remuneration free of any tax deductions (gross-up clause) under the relevant license agreement.

However, WHT is generally only levied if the rights are transferred "temporarily" (e.g., grant of exploitation rights to a patent under a license agreement for a limited period of time). A right is also considered to have been temporarily granted if it is uncertain whether and when the transferred right to use a right/exploit a right will end. In contrast, a temporary transfer of rights does not exist if the transferred right is to remain permanently with the acquirer. The "sale" of a right is therefore generally not subject to WHT. Such sale also exists if the transferred right is completely consumed economically during the granted term, e.g., in the case of a right related to an event or an advertising campaign.

It was disputed whether a copyright/exploitation right in a copyright could be transferred "permanently" for German tax purposes due to the specifics of German copyright law. The German tax authorities had denied such a possibility and held that a WHT deduction obligation existed in such cases. 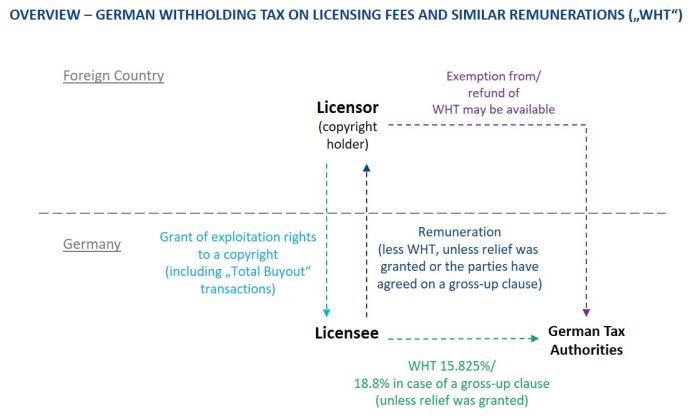 In the decision of the BFH, a German media company engaged a UK company and two authors with the development and revision of an existing screenplay and the creation of a new one. The UK company and the authors irrevocably granted the German media company the exclusive right, not limited in terms of content, time or place, in particular for film/television purposes, for the worldwide exploitation of the work and for all uses in return for a lump-sum payment. The parties agreed that the underlying total buyout agreement was to be governed by German law.

Although the exploitation rights were granted for an unlimited period of time, the tax authorities held that the corresponding remuneration to be paid by the German media company was subject to WHT. The BFH affirms the decision of the German tax authorities and rejects the view of the German media company that the "total buyout" of a copyright could be considered as a "sale" (i.e., a permanent transfer) of a right for the following reasons:

As a result, the remuneration paid by the German media company to the foreign authors in connection with the total buyout was subject to WHT.

The respective exploitation rights are generally subject to German copyright law and, thus, to WHT if the parties agree that their agreement is to be governed by German law. However, even if the parties choose to apply the laws of another jurisdiction that permit the permanent transfer of a copyright, certain provisions of the German copyright law may remain applicable. In particular, foreign authors/copyright holders may be entitled to a "continuing contingent claim to further profit sharing," pursuant to Sec. 32a of the German Copyright Act. This applies, for example, to the extent the copyright will be exploited in Germany under the relevant license/total buyout agreement. As the existence of such (potential) claim was invoked by the BFH in its decision to justify WHT liability, it may be concluded that WHT liability cannot be avoided in such cases by choosing the application of a foreign law. Nevertheless, this should be verified on a case-by-case basis.

The corresponding WHT can lead to a considerable financial burden for the parties concerned. However, it has to be noted that Germany has entered into Double Taxation Agreements (Doppelbesteuerungsabkommen, "DTA") with more than 90 countries worldwide, which may provide for reduced WHT rates. In particular, many of the DTA provide for 0% (e.g., DTA USA) or 10% (e.g., DTA China) tax rates. A full exemption from WHT may also be applicable to intragroup license payments under the requirements of the EU Interest and Royalties Directive. Nevertheless, these reduced rates are in any case subject to the foreign author's/copyright holder's filing of a respective application with the German Federal Central Tax Office ("BZSt"). In addition, foreign companies are only entitled to such reduced rates if they meet the requirements of strictly enforced "anti-treaty shopping rules." As the processing period for such applications is generally three months, foreign authors/copyright holders should review as soon as possible whether they are eligible for such reduced tax rates and, where appropriate, submit the relevant applications. If a full exemption from WHT under a DTA is not possible, alternative licensing structures may be considered.

In any case, the parties should consider the potential WHT exposure when negotiating and concluding the relevant agreements.