The UK government has published draft legislation to implement two changes particularly relevant for the restructuring and insolvency market.

The government expects these measures to raise c.£195m/year at their peak.


This reform will raise HMRC from an unsecured creditor to a secondary preferential creditor in insolvencies commencing on or after 6 April 2020, but only in respect of VAT, PAYE Income Tax and certain other taxes.2 HMRC will, however, remain an unsecured creditor for taxes levied directly on businesses, such as corporation tax and employer national insurance contributions.

The policy, announced without consultation in the Autumn Budget 2018, aims to increase returns for HMRC in insolvencies. Until 2003, HMRC ranked as preferential creditor and the reintroduction of a Crown preference is seen by many as a retrograde step.

The latest publications clarify that:

The government has indicated that it does not expect the proposed reform to have a material impact on lending. However, the proposed reform looks set to reduce appetite for lending and increase funding costs, especially for SMEs. It appears likely that tax will begin to distort lending arrangements again, with fixed-charge and asset-based lending set to increase to achieve priority over HMRC, instead of creditors relying on floating charges.

There is also concern that the proposed reform will give HMRC too much influence in insolvency processes. For example, the use of a company voluntary arrangement to compromise HMRC will become substantially more difficult, given constraints on compromising preferential debts within a CVA unless the preferential creditor consents.3 The government has attempted to address these concerns, but it is clear HMRC's interests may not be aligned with those of other creditors and it may now hold a de facto veto in certain scenarios.

HMRC will still share in the prescribed part (set aside from floating charge realisations for unsecured creditors) in respect of their non-preferential claims (e.g., for corporation tax) — effectively giving HMRC a second bite at the cherry. 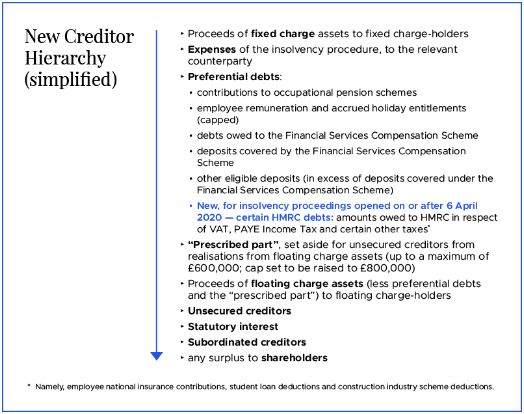 
To tackle perceived abuse of insolvency processes to reduce companies' tax bills, the Finance Bill introduces a new regime giving HMRC power to make directors and other connected persons jointly and severally liable for the avoidance, evasion or "phoenixism" debts of a corporate entity.

The proposed measure will apply to all tax periods ending after the date on which the Finance Bill 2019 is passed. (Timing is uncertain given the UK political situation, but 1Q20 currently appears most likely.)

HMRC may issue a "joint liability notice" to an individual in:

See the Appendix for further details. Safeguards include a right of appeal.

The government is clear that the majority of insolvencies arise as a consequence of genuine financial difficulties, and that this reform is targeted at the minority that seek to misuse insolvency to avoid meeting their tax liabilities. Nonetheless, these measures will increase the pressure on those running distressed companies, and tax diligence expectations, at what is already a difficult time for all involved.


The final legislation will be subject to confirmation in the Autumn Budget (the date for which has yet to be scheduled). Timing for the passing of the legislation is uncertain given the UK political situation, as noted above; 1Q20 currently appears most likely.


Conditions for the issue of a joint liability notice

The notice cannot be issued more than two years after HMRC first became aware of the facts.

Helpfully, the explanatory notes to the draft legislation indicate that this power will not be used in respect of "turnaround specialists" whose connection with the companies is part of a genuine attempt to save the company. However, this continues the current (unfortunate) trend in drafting tax legislation widely such that it captures both "in scope" and "out of scope" behaviours and then relying on guidance or similar to provide "reassurance" that out of scope cases will not be pursued.

Cases where a penalty is imposed for facilitating avoidance or evasion

1. "Phoenixism" is the practice of running up liabilities in a limited liability entity, then avoiding paying them by making the company insolvent — and setting up a new company carrying on broadly the same business (often to repeat the practice).↩

ARTICLE TAGS
UK Insolvency/Bankruptcy/Re-structuring Insolvency/Bankruptcy Tax Income Tax National Insurance Sales Taxes: VAT, GST
POPULAR ARTICLES ON: Insolvency/Bankruptcy/Re-structuring from UK
No Recognition Of Solvent "Foreign Proceedings" In The UK
Kirkland & Ellis International LLP
The English court has held that solvent proceedings cannot be recognised under the Cross-Border Insolvency Regulations 2006 ("CBIR")
Insolvency In Construction: What Does This Mean For Your Contract?
Gowling WLG
In the second of our mini-series on insolvency in construction, we consider what you need to do when you find out that the party you are in contract with has become (or is about to become) insolvent.
Court Of Appeal Confirms Decision In Michael J Lonsdale (Electrical) Ltd v Bresco Electrical Services Ltd (In Liquidation) [2018] - A Lesson In Practical Utility
Gowling WLG
In July 2018, the Technology and Construction Court (TCC) handed down judgment in a case of particular significance for the construction industry and insolvency practitioners taking appointments in the sector in the case of Primus Build Limited v Cannon Corporate Limited.
Insolvency In Construction: In Contract With An Insolvent Company - What Now?
Gowling WLG
When one party to a construction contract has become insolvent, there are a number of options open to its counterparty. The best course of action will depend upon the specific circumstances.
Acquisition Of Claims By Third Party Litigation Funders
Ferguson Litigation Funding Ltd
As third-party litigation funders, we are often asked by insolvency office holders whether we are interested in acquiring claims as opposed to funding them.
Directive On Restructuring And Insolvency
DLA Piper
Directive 2019/1023 of 20 June 2019 on preventive restructuring frameworks, on discharge of debt and disqualifications
FREE News Alerts
Sign Up for our free News Alerts - All the latest articles on your chosen topics condensed into a free bi-weekly email.
Register For News Alerts
Article Tags
UK Insolvency/Bankruptcy/Re-structuring Insolvency/Bankruptcy Tax Income Tax
National Insurance Sales Taxes: VAT, GST
More Tags
Similar Articles
Powered by mondaq AI
MATCH
67%
Tax Abuse And Insolvency Ferguson Litigation Funding Ltd
Related Articles
No Recognition Of Solvent "Foreign Proceedings" In The UK Kirkland & Ellis International LLP
Rocking The Boat – Pension Schemes Bill Proposals May Risk Destabilising Future Restructurings Hogan Lovells
Stop, Collaborate And Listen: First Recognition And Assistance Granted To Mainland Liquidators In Hong Kong Herbert Smith Freehills
The Use And Abuse Of The Insolvency Act In Matrimonial Claims Edwin Coe LLP
Resisting Enforcement Of An Adjudicator's Award: How Insolvent Does The Payee Need To Be? Shepherd and Wedderburn LLP
Comparative Guides
Anti-Corruption & Bribery
Cartels
Corporate Tax
Enforcement of Foreign Judgments
FinTech
Mondaq Advice Centres
UK
Coming to and Investing in the UK
Global
Investment Immigration
Global
Trademarks in SAARC Countries
More MACs