UK: Do You Consider Your Board To Be Diverse In Terms Of Their Socio-Economic Backgrounds?

by ICSA
ICSA
To print this article, all you need is to be registered or login on Mondaq.com.

Our community looks at social diversity

Inspired by a report from the Equality Group which found that 21% of Londoners thought their class and background had been a professional disadvantage, and 26% had changed the way they speak to be more like the "Queen's English" we decided to see what The Chartered Governance Institute and Core communities think about socio-economic diversity within their organisations.

When asked about whether they considered their board to be diverse over two-thirds (67%) said that theirs was not. One responder stated that "Board members are all socio groups A and B mainly A. So many directors be they female, gay, ethnic or male have all been to the same unis, business schools, and sometimes the same companies. Boards in the main fear having an employee in the Board or even a Committee". Whilst another claimed that theirs had a "typical composition of 'pale-male-stale".

Which of the following does your company do – if any – when hiring? 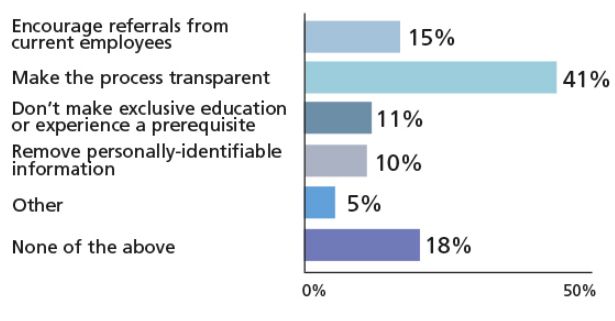 Some questioned how easy it is to quantify stating that "It depends on what you mean by 'diverse'. We have a mix of privately and state educated board members. However all are degree educated with most in STEM subjects. All come from middle class to upper middle class backgrounds. All are now in top socio economic group" and another "I believe this is a really tricky challenge for the Board - as an example - when is that socio-economic background measured? On appointment or in formative years? I presume the latter. But even then, how does one view someone from an underprivileged background, state school but achieved academically and went to Oxbridge and has for thirty years been a high achiever?"

Our responders all felt that increased diversity was a good thing, highlighting that diverse boards brings "a diverse workforce brings diverse thinking and leads to diverse solutions to challenges" and "[an] ability to better identify with range of service users and provide a range of ideas and approaches to improve the service that we provide". However, most stated that they did their best to attract diverse applicants when recruiting with one responder saying that "we advertise impartially so that anybody who suits the criteria for the position regardless of their background can apply".

When asked specifically about educational backgrounds only 34% thought that their boards were diverse enough with one claiming: "In the financial services industry, the regulators are looking for individuals that possess a specific skill set, and this in practice limits potential candidates from a broader pool. As a wider question, it would be interesting to get a view from investors on whether they would be prepared to support directors that are from a different background" and another worryingly stating: "Most boards are drawn from the same small social and educational background. Diverse in colour, sexuality, gender yes, but let someone in from outside the top socio economic groups – hell no. Modern boards are consciously resistant to someone from outside being considered. Boards think they have a robust process free from bias but to whittle down to a NED they will pick one from their own society even in today's environment. And sadly female directors have the same attitude! That's life!

Conducted in association with The Core Partnership

ARTICLE TAGS
UK Corporate/Commercial Law Corporate and Company Law Corporate Governance Directors and Officers
POPULAR ARTICLES ON: Corporate/Commercial Law from UK
Fact vs Fiction: The Liability Of Disclosed Principals
Simkins
The Court of Appeal in Bell v Ivy Technology Ltd recently dismissed Mr Bell's appeal that a breach of warranty claim should not be brought against him under a share purchase agreement when he was not a party to it ...
The Power Of The Minority: Five Rights That Every Majority Shareholder Should Be Aware Of
MJ Hudson
In this article we focus on some of the rights held by minority shareholders of a company incorporated in the UK, and how they can impact on the influence wielded by majority shareholders.
Misrepresentation Claims: An Essential Update And Practical Advice
Walker Morris
When parties consider doing business together, a multitude of enquiries, discussions and negotiations take place before any deal is done.
An A to Z of Contract Clauses - Key Terms for your Contracts
Lawrence Graham LLP: Commerce & Technology
Navigating a commercial contract and appreciating the implications, both legal and practical, can be a daunting task. This article provides a snapshot of key clauses typically found in a standard commercial contract and looks at the implications of those clauses for the contracting parties.
Opportunities And Challenges In Industrial And Logistics
Stevens & Bolton
We recently joined Property Week's virtual Industrial & Logistics Conference & Showcase, which explored the successes and changes in the market as well as the emerging theme of sustainability.
Click Yes To Accept: Fairness And Transparency In Consumer Contracts In Europe
Morrison & Foerster LLP
Companies contracting with consumers have to take care to ensure their agreement terms are enforceable. In one of the first post-Brexit decisions on issues in an online consumer contract...
FREE News Alerts
Sign Up for our free News Alerts - All the latest articles on your chosen topics condensed into a free bi-weekly email.
Register For News Alerts
Article Tags
UK Corporate/Commercial Law Corporate and Company Law Corporate Governance Directors and Officers
Related Articles
Do I Need A Shareholders' Agreement? RFB Legal
Opportunities And Challenges In Industrial And Logistics Stevens & Bolton
Fact vs Fiction: The Liability Of Disclosed Principals Simkins
UK Reporting For Share Plans With UK Participants Due July 6 Cooley LLP
HMRC Confirms That Donations Made By Waiving A Refund Or Loan Repayment Are Eligible For Gift Aid In The UK Withers LLP
Mondaq Webinars
US Magistrate Judges on the Art of Settlement
JAMS
Webinar Chicago United States
Current Issues in the Mediation of Bankruptcy Disputes
JAMS
Webinar Chicago United States
More Webinars
Comparative Guides
Anti-Corruption & Bribery
Artificial Intelligence
Banking Regulation
Blockchain
Cartels
More Guides
Mondaq Advice Centres
UK
Coming to and Investing in the UK
Global
Trademarks in SAARC Countries
Global
Investment Immigration
More MACs
Upcoming Events
Conference 21 – “Smart Work”
Blaser Mills
Conference London UK
Digitalisation Of Tax Administration And Its Impact On ERP Configuration
TMF Group BV
Webinar London UK
Mondaq Social Media