by
CGLytics
0 Liked this Article
To print this article, all you need is to be registered or login on Mondaq.com.

Glass Lewis' assessment of executive remuneration reflects a balance of quantitative and qualitative considerations, with CGLytics' suite of tools underpinning the quantitative component.

The Remuneration Analysis section, included in Proxy Papers for the UK and over a dozen markets, helps to identify whether CEO pay practices are aligned with company performance. The section covers the prior three years and can be adjusted to show realised, realisable or granted pay, both on an absolute basis and relative to country and industry peer groups developed by Glass Lewis in collaboration with CGLytics.

In the following discussion, we review the quantitative assessment with respect to Persimmon plc, using CGLytics' analytical tools.

Back in 2012, Persimmon plc made a commitment to its shareholders: over the next decade, the UK homebuilder would return £1.9bn (£6.20 per share) of surplus capital through a series of dividends and share issuances. In order to encourage management to deliver on this commitment, the board proposed a new long-term incentive, the Capital Return Plan, which was intended "to provide a closer link between reward to executive directors and senior management for the successful implementation of our strategy."

The plan gave roughly 140 senior employees, including executive directors, the rights to 10% of the company's share capital so long as cumulative dividend targets were met at five measurement dates over a ten-year period. Shareholder returns didn't just determine how much of the award vested, but also the value delivered to executives: while the awards were granted as share options with an exercise price of £6.20 (the per share return target), this exercise price was reduced by any shareholder distributions. Return the full amount to shareholders through dividends and issuances, and the awards would be free to exercise.

Between the Capital Return Plan's size and structure, and in particular the duplicative reliance on a single measure of performance that could be manipulated by the award recipients, Glass Lewis was sufficiently concerned to recommend voting against adoption at an October 2012 general meeting. However, the decision to align payouts directly with shareholder returns over what appeared to be an extended ten-year period convinced nearly 85% of voting shareholders to support the plan.

The incentive was highly effective at aligning executive interests with shareholder returns – so much so that the ten-year period was quickly irrelevant, with distributions exceeding the 2019 target by the end of 2015. It's unclear whether the accelerated returns reflected strong performance, insufficiently ambitious targets, or the unexpected tailwinds of the government's Help to Buy scheme (or all three); regardless, the result was a total pot of approximately £99 million due to be awarded to the three participating executives in FY2017 (subject to a holding period), including approximately £45 million due to chief executive Jeff Fairburn – representing only the first of two tranches, and making Mr. Fairburn one the UK's most highly paid executives.

Most UK plc's follow a common template for executive remuneration: salary, cash in lieu of pension, cash and deferred share bonus, and a long-term award of performance-based shares. Accordingly, for most UK companies Glass Lewis' Remuneration Analysis focuses on realised pay in order to capture the value of long-term performance-share awards.

However, the CGLytics pay-for-performance tool allows users to customize their analysis to show remuneration on a realised, or realisable, or granted basis. In the case of Persimmon, Glass Lewis' Remuneration Analysis focuses on realisable pay to appropriately capture the Capital Return Plan's use of share options, reflecting the UK "Single Total Figure of Remuneration" table.

Looking at realisable pay, CGLytics' analysis illustrates the impact of the Capital Return Plan. Average pay within the industry and across the market remained largely static from 2016 to 2017—but due to the vesting of options at Persimmon, Mr. Fairburn's pay spiked for both 2017 and 2018, significantly above the level received by either peer group. A breakdown of absolute pay shows that the disparity stems exclusively from the long-term incentive component of remuneration. 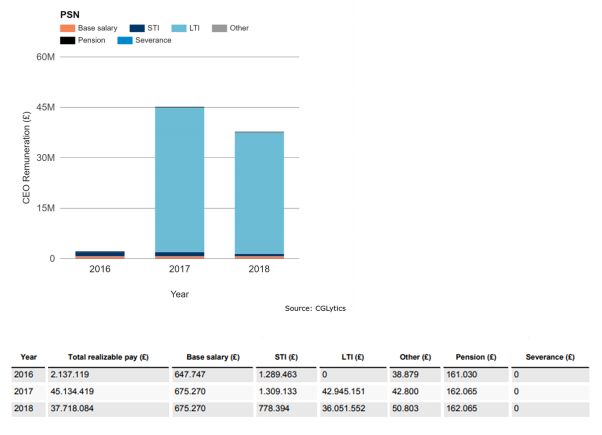 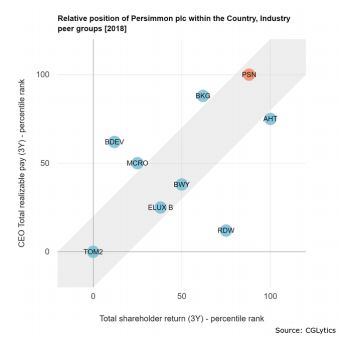 The sooner- and larger-than-expected vesting in 2017 prompted significant public outcry and investor backlash, with far reaching consequences. Recognising that the Capital Return Plan could have included a more meaningful limit on the size of individual awards, both the board chair and senior independent director (who had chaired the remuneration committee) resigned from the board. Under new leadership in advance of Persimmon's 2018 AGM, the remuneration committee carried out extensive engagement with shareholders and reduced awards due to vest in the second tranche by 50%, applying a maximum entitlement of £29 per share.

These reductions were not enough to limit the fallout. In late 2018, Persimmon announced that Mr. Fairburn would leave by mutual agreement, explaining that although he was a "successful leader ... the distraction around his remuneration ... continues to have a negative impact on the reputation of the business and consequently on Jeff's ability to continue in his role."

Ultimately, Glass Lewis recommended that shareholders support the advisory remuneration report at Persimmon's 2019 AGM. Whereas the remuneration disparity illustrated by CGLytics data had driven Glass Lewis to recommend voting against the initial plan and subsequent remuneration reports, our support in 2019 reflected a variety of factors, including the positive steps taken by the board and committee, such as personnel refreshment and reductions to the second tranche of awards; and an acknowledgement that (a) this is the last year that awards will vest under this plan, and (b) excluding FY2017 & FY2018 remuneration, Persimmon's historical remuneration outcomes dating back to FY2014 have been aligned with peers and performance, as determined using CGLytics' P4P tool.

By providing a variable, customized analysis in one centralised platform, CGLytics tools enable Glass Lewis to deliver a more nuanced assessment of executive remuneration in our Proxy Papers, supporting and enhancing our voting recommendations.

Glass Lewis uses CGLytics as it's global compensation data provider. For the 2020 proxy season our data will provide the basis of Glass Lewis' Say on Pay recommendations.

ARTICLE TAGS
UK Corporate/Commercial Law Corporate and Company Law Executive Remuneration Shareholders
POPULAR ARTICLES ON: Corporate/Commercial Law from UK
Privilege - Court Of Appeal Restricts Ambit Of Legal Advice Privilege
Gowling WLG
In an important decision for in-house lawyers in particular, the Court of Appeal has confirmed that documents will only benefit from legal advice privilege where they are prepared...
IR35 Changes 2020 Alert: How Can The Private Sector Comply?
Vistra
With two months until the changes to IR35 come into force, all medium to large companies in the private sector need to determine the tax status of their contractors, or risk facing financial liabilities.
5th MLD, Beneficial Owners And Companies House Discrepancies Reporting
Vistra
The Fifth Anti-Money Laundering Directive has just come in to force in the UK by way of the Money Laundering and Terrorist Financing (Amendment) Regulations 2019 (the "Regulations").
Decision On Fiduciary Duties
Matheson
The High Court of England and Wales has issued an important judgment concerning the fiduciary duties of directors.
Top Contract Law Cases Of 2019 For Scots Lawyers
Dentons
2019 brought some interesting and important case law of relevance to Scottish commercial contract lawyers. Summarised below are our pick of 2019's top contract law cases from north and south of the border.
Contracting With Disclosed Principals: Who Is Your Counterparty?
Shearman & Sterling LLP
It is often taken for granted that only the named parties to a contract can enforce it.[1] The English Court of Appeal has recently considered an important derogation from that assumption
FREE News Alerts
Sign Up for our free News Alerts - All the latest articles on your chosen topics condensed into a free bi-weekly email.
Register For News Alerts
Article Tags
UK Corporate/Commercial Law Corporate and Company Law Executive Remuneration Shareholders
Related Articles
Bootstrapping Acquisitions For Cash-Poor New Businesses Taylor Vinters
Private Equity: The Future Is Now Vistra
A Contractor's Guide To Managing The Commercial Impact Of The COVID-19 Virus On Construction Project Clyde & Co
Global Insurance M&A At A Four-Year High Clyde & Co
Important Decision For Directors Of Companies In 'Soft Touch' Provisional Liquidation Carey Olsen
Comparative Guides
Anti-Corruption & Bribery
Cartels
Corporate Tax
Enforcement of Foreign Judgments
FinTech
Mondaq Advice Centres
Global
Investment Immigration
Global
Trademarks in SAARC Countries
UK
Coming to and Investing in the UK
More MACs