Turkey: Under The Magnifying Glass: Turkey's Increase On Special Consumption Taxes For Motor Vehicles From An International Trade Perspective

"Taxation under every form presents but a choice of evils." - David Ricardo

It has been many years since pioneers such as Karl Benz and Henry Ford have introduced us with a shiny metal cart on four big wheels and a motorized engine that we came to know as the automobile. While the following years have featured unparalleled technological improvements and completely transformed the transportation industry, automobiles have always been an object of desire for the community. From the family vehicle for daily commute to the infamous red sports car on the cover of your favorite magazine, motor vehicles have established a bond between man and machine that is second to none. Emotions aside, the decision to own an automobile is mostly based on external conditions such as the daily travel distance, urban availability, fuel prices and the cost of ownership, which includes inter alia the taxes.

With the backlash of COVID-19 outbreak, safety concerns and the need for personal space during daily commute also took its place among these factors and sharply increased the demand for automobiles. When we couple this increase with the disruptions occurred in the global supply chain, automobile prices all around the world have been considerably inflated in the second and third quarter of 2020. The picture becomes even more dramatic in countries that are substantially affected by the currency fluctuations.

While the increasing prices make car ownership a sweet but distant dream for the average citizens, Turkey made a rather interesting move and increased the taxes on automobiles, making it even more unreachable. Although bumping up the taxes in this context may seem a little irrational, there may be more to this move than meets the eye. As international trade lawyers with a passion for moving objects, we took it upon ourselves to assess the recent tax increases from a comparative advantage perspective.

Through the end of August, Turkey has announced the new Special Consumption Tax ("SCT") rates levied on motor vehicles with a Presidential Decree1. In fact, taxes on motor vehicles have been inherently high in the Turkish jurisdiction. The 11th Development Plan of the Turkish Ministry of Development, which evaluates the period between 2019 and 2023 indicate that 16.1% of the total SCT revenue in 2017 was consisted of automotive, while 5.6% of the total tax revenue is generated from automotive related taxes2. Thus, it is not a rare occasion to tax a vehicle with rates in excess of 100%. However, the new increases have further deepened this situation and even took the form of a joke among the friends saying, "If you buy a car today it means you buy another two to the State through these crazy taxes." 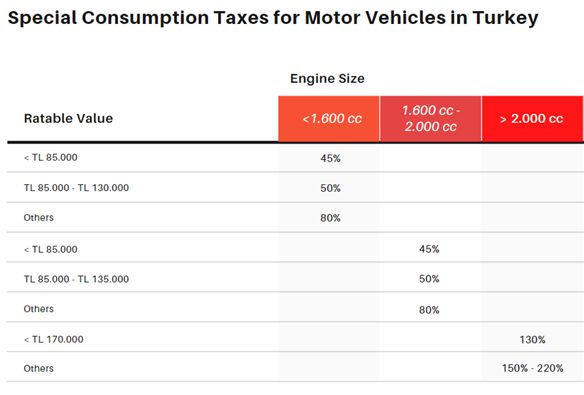 When we assess the systematic behind the recent tax increase, everything seems to be business as usual. Indeed, the tax increase is imposed equally on all vehicles, whether they are imported or not. However, things start to get interesting when we take a closer look at the composition of imported vehicles and the domestic productions.

The Ministry of Industry has published its latest report on the domestic content rates in the automotive industry on 11 May 20203. When we assess the engine sizes of the list of vehicles manufactured in Turkey, we see that a vast majority of the engines used in passenger vehicles and light commercial vehicles are smaller than 1.6 liters. The comparison of this report with the previous years also indicate an increase in the use of domestic content for the vehicles manufactured in Turkey.

Automotive industry has a high importance for the Turkish economy. It is among the top ten industries by contribution to the gross domestic production and has a leading position in generation of employment and tax revenue4. Another area that the automotive industry contributes the most is Turkey's overall exportation, where it plays a significant role. The capacity utilization rates for the production of passenger vehicles and light commercial vehicles as well as the export volumes are also considerably high.

Accordingly, we see that the de facto effects of the SCT increase and the design of the systematic therein provide a significant tax advantage for the domestically produced vehicles. While the heavy effects of the increase mostly fall upon the mid-range and expensive models that are imported, the rest of the vehicle stock remain mostly immune to the new taxes. Of course, the comparative effects of this increase is even more advantageous for the domestic production since the tax rate difference is more than double in certain instances. Against this backdrop, we think it is important to assess whether this seemingly neutral tax increase may produce a de facto discrimination against the imported vehicles.

Concept of Comparative Advantage and Trade without Discrimination

From a functions perspective, the World Trade Organization ("WTO") aims to ensure a fair and level playing field for all participants of the international markets. In an effort to enable the free trade of goods and services, the WTO has formed a rules based multi-lateral trading system, which places a high importance on trade without discrimination5.

Accordingly, theory of comparative advantage by David Ricardo has been one of the foundational building blocks of trade without discrimination in the realm of global commerce. The comparative advantage theory, in essence, stipulates that any country would better prosper by specializing in the good for which they have relatively more productivity, and exporting that good while importing others in free trade6. Although the years following Ricardo's introduction of the comparative advantage approach have featured several variations and different approaches, the theory has remained to be one of the thought basis for the ideal of free trade.

By a similar token, the ever-cherished national treatment principle is recognized in all three of the main WTO agreements (Article 3 of GATT, Article 17 of GATS and Article 3 of TRIPS). This principle strike for a neutral treatment for imports and stipulates that imports and locally produced goods shall be subject to an equal principle.

Within this context, indirect taxes imposed internally, such as the SCT, are captured by GATT rules as far as they are employed with the aim of protecting domestic goods and services. To date, more than 40 disputes have been brought before the WTO's Dispute Settlement Body concerning tax measures. Hence, WTO's jurisprudential guidance is important for the assessment of the SCT increase at hand.

Jurisprudence of the WTO

The purpose of Article III as well is its interrelated application towards the domestic tax policies is assessed in the Japan – Alcoholic Beverages II decision. Accordingly, the Appellate Body draw attention on the purpose of preventing tax related protectionism and set forth that;

On the other hand, it is worth mentioning internal taxes and regulatory measures fall within the scope of Article III to the extent they produce economic impact8 on the conditions of competition between imported products and the like products produced domestically (Argentina – Hides and Leather).

The decision emphasizes that the foregoing approach is regardless of the aim pursued by the Member States through the taxes in question.

Similarly, as in Canada-Periodicals decision, the Appellate Body employed a two-tiered test to establish a violation of Article III:210. Accordingly, it is important to make a distinction between the direct and indirect effects of the application in question and assess the concept of like product and excess taxation on a case-by-case basis. In specific, the assessment of indirect effects is of importance for the Turkish SCT, the potentially discriminative element in which predominantly operates in an indirect manner.

In another case law example, the Canada-Periodicals decision, certain Canadian taxes were brought under scrutiny based on discrimination. Accordingly, Canada argued that it applied differentiating rates of taxation, which made it possible for an imported item to be taxed at a higher rate than a domestic product11. Accordingly, Canada set forth this to argue that its taxation was in fact non-discriminatory. However, the Appellate Body concluded that the taxation in question produced an indirect effect on the imported goods and underscored that;

"Any measure that indirectly affects the conditions of competition between imported and like domestic products would come within the provisions of Article III:2, first sentence, or by implication, second sentence, given the broader application of the latter."12

Ever since motor vehicles became an integral element of the modern life and societies started to relay on them for not only transportation but also connectivity and infrastructural maintenance, their role in the global trade have also been on the rise. Accordingly, the foregoing examples demonstrate that acts of discrimination by way of taxation may fall within the jurisdiction of the WTO. Moreover, indirect effects of such taxation may be challenged to the extent it imposes a comparative disadvantage to the imported products, when compared to their domestic counterparts. 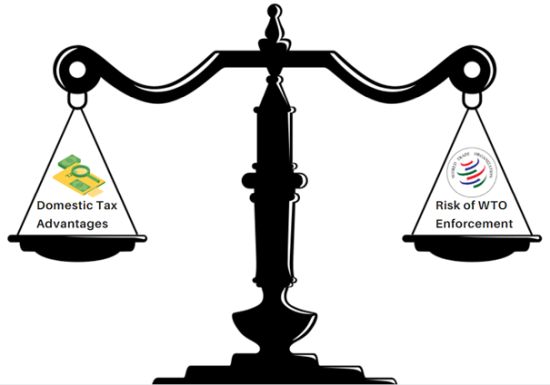 At the first glance, there are similarities between the potential aftermath of the recent SCT increase in Turkey and the previous incidents, where the WTO took a rather rigid approach and opposed to taxes with discriminatory effects. To cement the fate of such taxes, the WTO also clarifies that neither the underlying intention of the relevant taxes nor the mere fact that, in some instances, domestic products may also get the worse end of the stick might not be sufficient to demonstrate the non-discriminatory nature of the relevant application.

That said, the application of the new SCT rates have a long hike in front of them and the associated degree of discrimination risks remains to be seen. In other words, we still need to see whether the implied protectionist element featured in the potential and indirect effects of the new SCT rates will reach up to a point of discrimination. The degree and extent of benefits to be incurred by the domestic production because of the new tax rates as well as the like product status of the vehicles among which the potential shift of demand will occur are among the primal issues to be monitored in this assessment.

What we see here is the infamous dilemma of over-egging the pudding. To the extent deemed discriminatory, interested parties may be urged to challenge the SCT before the WTO. In such a case, the WTO will review the issue and eventually render its judgement. If it deems that the SCT is in violation of the rules-based system, Turkey will have to revise this and ensure compliance with the WTO. If not, other countries may have the legal option to retaliate against the SCT, which would target and considerably distort the exportation by the Turkish domestic industry. Considering that exportation is a significant lifeline for the Turkish automotive industry, the SCT may end up conflicting with the interests of this industry in the long haul.

Therefore, it would be fair to point out that providing tax advantage to the domestic industry via the SCT (at the cost of discrimination and WTO violation) carries the risk of harming the very same industry through a potential WTO dispute. Accordingly, the mere disposition of the SCT mechanic and the potential discriminatory effects on an indirect basis make it worthwhile for international trade enthusiasts to keep an eye on the developments.

1. The Presidential Decree numbered 2912 published in the Official Gazette no. 31229.

13. Agreement on Subsidies and Countervailing Measures, Annex I, footnote 58.