The path that the liberalizing power markets have followed in many countries has common milestones that have been explored in the literature regarding power market liberalization pretty widely and thoroughly. One of the most important research topics and an important contribution to the literature on the subject is "Making Competition Work in Electricity Markets" by Sally Hunt.1 Although the path towards retail competition has been illustrated as "models" in this canonical research, four stages were depicted distinctly: vertically integrated model, single buyer model, wholesale competition and finally retail competition or retail choice.

From an historical perspective, these models follow one another in most cases. For instance, vertically integrated models are followed by single buyer models where some qualified power plants (QFs) by independent undertakings are allowed to generate electricity but obliged to sell it to a single buyer who in most cases is the vertically integrated utility. Depending on the specific needs and the policy goals of the countries concerned, the QFs may be selected based on different criteria such as being renewable, commissioning rapidly or using domestic fuels.

In most cases, long-term power purchase agreements (PPAs) have been concluded with the QFs and the related utilities since direct access to the end users is exclusively defined and allowed for the utilities. Pre-determined price guarantees, fuel price pass-through mechanisms and other privileges are accepted in most cases in order to attract the required investment to realize the QF investments.

Until further steps through competition in the power market are taken, such a scheme works smoothly and helps to alleviate security of supply concerns while serving in favor of certain policy goals adopted by the governments. However, once it is decided to open up the power market for competition, these long-term contracts put undesired burden on the reform process since they create a sheltered area where price and volume are pre-determined and not subject to competitive dynamics. At the beginning of the third model/phase, the reform makers face two options to handle these so called "stranded costs": a smooth transition such that the sheltered area is preserved and maintained until the contracts expire; or buy out the old regime to start the competitive stages as a tabula rasa. In most cases, governments opt to act patiently and restrain themselves from buying the old regime due to several reasons that might not be a good idea from both theoretical and practical perspectives.

In this short essay, we attempt to analyze the regulatory framework in Turkey regarding the stranded costs inherited from the single buyer model that the country went through during the eighties and nineties.

The single buyer model in Turkey was introduced in 1984 through the enactment of Law No.3096. The legislation allowed power plants to be built by the private companies selected by the Ministry of Energy and sell their output on a long-term basis through PPAs concluded with the state owned vertically integrated utility. In 1994 further legislation was enacted to pave the way for BOT model in the power market. Finally, Law No.4283 was enacted and the BO model became an option for QFs during the single buyer era.

In rapidly enacting the related legislation and concluding long-term PPAs with the QFs, the driving force for the Turkish governments was concerns about security of supply and the inability of the government budget in providing the required financial resources for the necessary investments that may alleviate these concerns. Taking the advantage of rapid deployment opportunity, gas-fired power plants were the popular types for the QFs built under the single buyer scheme.

In 2001, when the policy makers in Turkey decided to open up the power market for wholesale competition, a robust portfolio of QFs have already been built by private sector companies with long-term PPAs with the vertically integrated utility, in most cases at hotly debated purchase prices. Even after fifteen years from the restructuring legislation, there still exists QFs with long-term PPAs. 41,5 GWh electricity was purchased from 5 BO plants while 12,1 GWh electricity was purchased from 18 BOT plants. Two plants with TOOR contracts sold TETAŞ (Turkish Electricity Trading and Contracting Company) 2.7 GWh electricity in 2015. Purchased volumes are illustrated below.

In 2001, Law No.4628 was enacted, and the wholesale competition model in Turkey was introduced accompanied by the establishment of a sector-specific regulatory body, namely Energy Market Regulatory Authority (EMRA). Through the reform process, generation has been opened up for competition and free private participation; national grid remained state-owned monopoly subject to rate regulation; 21 distribution regions were privatized and remained regional monopolies but again subject to rate regulation; publicly owned generation portfolio was privatized to a great extent (excluding strategic dams); retail sales and distribution activities were legally unbundled, and functional unbundling rules have been put in place; the eligible consumers who are free to choose their suppliers were defined, and the threshold has been steadily reduced; day ahead and intra-day markets were introduced, and for market operations EPİAŞ was established.

A huge rally in the generation business by private sector was witnessed since 2001, and the share of the private sector in power capacity portfolio reached 74 percent as of September 2016. Meanwhile, Turkey opted for a smooth transition in handling the stranded costs, thus power plants with purchase guarantees with relatively high prices and plants that carry the volume and price risk on their shoulders. Consequently, the generation portfolio of the country was composed of contracted generation and free generation on the one hand and state-owned generation on the other. 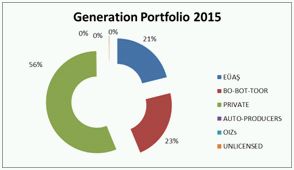 At the beginning of the reform process, vertically integrated state utility TEK had been broken into functional bodies such as TEİAŞ for transmission, TEDAŞ for distribution, EÜAŞ for state-owned generation and finally TETAŞ for smoothly administrating the transition period for the stranded costs. That is, the role of TETAŞ was and still is crucial in handling the stranded costs. 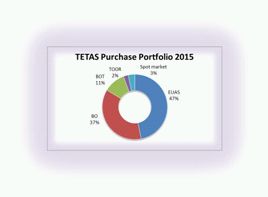 TETAŞ was established in 2001 as the state-owned wholesale company in order to take up the stranded costs of the previous single buyer regime. TETAŞ buys energy from the contracted QFs and EÜAŞ and sells energy to the regional incumbent retail companies (legal monopolies in their regions for non-eligible customers and supply for last resort) for their regulated portfolio supplies such that higher prices of the contracted QFs (stranded costs) are partly offset by the low-cost EÜAŞ generation (mostly hydro with near-zero marginal cost). 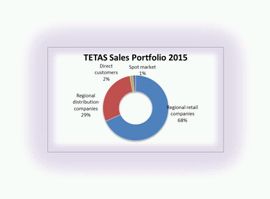 However, the stranded costs tend to get reduced as the contracts for QFs expire on a gradual basis. It should be noted here that at the time expiry for BOT and TOOR contracts plants will be returned to the state whereas for BO contracts the owners will continue to operate the plants albeit with no purchase guarantee. Thus, a huge volume of power plants, mostly fueled by natural gas, will operating in the free market i.e. trying to find customers for bilateral agreements, bidding on the day-ahead and intra-day markets.

While the stranded costs inherited from the old regime tend to get smaller, additions to TETAŞ's purchase portfolio are being made at the same time. For instance, for NPP projects, TETAŞ became instrumental as a counter party for absorbing the purchase guarantees. Most recently, under the scope of the supporting scheme introduced for incentivizing domestic coal plants, TETAŞ started to sign PPAs with the qualified coal plants. As a result, portfolio of TETAŞ tends to get smaller from one source while expands due to additions.

4. The dilemma of gas-fired plants

The share of natural gas in Turkish generation portfolio tends to increase steadily. In 2014 and 2015, 48 percent and 38 percent of electricity was generated in gas plants respectively.

Since Turkey has very few gas deposits and import dependent in gas supplies, reducing the share of natural gas has been of the energy policy goals while increasing the shares of renewables including hydro, domestic coal and nuclear energy was set as a policy target.2 Meanwhile, prices in the spot market (PTF) followed a moderate path for several years leaving high-marginal cost gas plants with a stressed financial position and supported through feed-in tariffs, YEKDEM portfolio has reached 15.000 MW in 2016. Most recent purchase guarantee for the domestic coal plants extremely added to the concerns of the gas plant operator.

It should also be noted here that by 2019 almost 6000 MW of contracted QFs will become potential players in the market tackling with the above-mentioned concerns: increasing volume in YEKDEM, PPAs with domestic coal plants, scheduled commissioning of NPPs with PPAs and relatively low spot market prices. It is no surprise that gas plants will seek ways to mitigate these unfavorable circumstances. Some may explore ways for temporary shutdowns, some may decide on complete decommissioning while some may take legal action through litigation processes against discriminatory terms they face.

What can save gas plants – "capacity markets"?

Under these circumstances, the most viable way for "not scrapping" the multi-billion gas-fired power plant projects seems to establish capacity markets considering that these plants are necessary for the long-term security of supply. Indeed, establishing capacity markets had been one of the policy goals of the 2009 Strategy Paper; however, this goal is yet to be realized.

The Capacity Market is designed to ensure sufficient reliable capacity is available by providing payments to encourage investment in new capacity or for existing capacity to remain open. An additional underlying reason for the introduction of capacity mechanisms is to maintain a certain level of supply, particularly when there is a shortfall from renewable sources (which are intermittent and weather based by nature).

Capacity mechanisms can provide additional cash flow for the gas plants for being only available for generation. Although pros and cons of capacity mechanisms are still being hotly debated, many countries introduced such schemes for long-term security of supply concerns. In Europe for instance, in many Member States capacity mechanisms have been put in place albeit in different forms.

To help determine whether a measure or practice in a Member State qualifies as a capacity mechanism, the Commission has identified the following indicators. Capacity mechanisms:

In Turkey, capacity mechanism is yet to be put in place, and the market still operates as an energy-only market. However, it is no secret that EMRA has been working on an appropriate capacity mechanism to provide additional cash flow for being available in return for mitigating long-term security of supply concerns and short-term instabilities and variance in spot electricity prices.

Under this scope, Electricity Market Law (EML) has been amended in August 2016 and the establishment of capacity mechanisms is grounded on a legislative basis. According to the amended version of the Article 20 of EML; in order to provide the adequate level of installed capacity and to secure the system reliability for maintaining the reliable capacity, capacity mechanisms shall be established including the required reserve capacity for security of supply. Such mechanism shall prioritize the domestic sourced power plants and the necessary payments to be made by TEİAŞ under this scope shall be covered through transmission tariffs. Rules and procedures regarding the mechanisms shall be set by EMRA upon the opinion of the Ministry.

As seen from the amended legislation, the mechanisms to be established by EMRA shall prioritize the domestic sourced power plants and power plants using natural gas and imported coal (as well as nuclear when commissioned) will be subordinated.

The details of the mechanism are not yet to be publicly announced nor has any regulation regarding the details been introduced. As said, such schemes are still controversial and many different approaches can be seen in many different countries. EMRA staff should closely examine the different approaches and best practices in order to avoid additional controversies. Nevertheless, such a scheme may alleviate the distress the gas plants have been undergoing. They may be receiving extra revenues for not only generating power but also maintaining their plant just available for generation.