Turkey: Commercial Relations Between Turkey And The Russian Federation

by Bihter Bozbay and Eylül Topanoğlu
Kolcuoglu Demirkan Kocakli Attorneys at Law
Your LinkedIn Connections
with the authors
To print this article, all you need is to be registered or login on Mondaq.com.

The Russian Federation ranked sixth among Turkey's most preferred exports destination in 20123, and the ratio of Turkey's export to the Russian Federation was approximately 5%4 of its total export in that year. According to the data provided by TUSKON5, exports from Turkey reached USD 7.3 billion in 2013. The largest export categories are (i) textile, fabrics, manufactured goods, (ii) vegetables and fruits and (iii) vehicles. 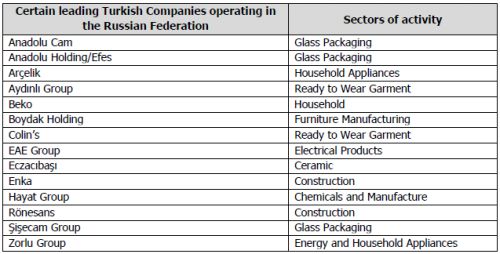 Meanwhile, foreign direct investments of the Russian companies in Turkey tapped USD 2.7 billion by the end of 201210. Russian firms are mainly interested in telecommunications, energy and tourism sectors in Turkey. According to the data provided by the Russian Federation Chamber of Commerce and Industry and TUSKON, Russian firms have invested approximately USD 900 million last year and the total invested amount so far exceeds USD 6 billion.

According to the list provided by the Ministry of Economy, approximately 1,628 companies with Russian capital currently operate in Turkey and companies such as Belavia Belarusian Airlines, Gazprom Export Ltd., Pronto Moscow, Power Machine OJSC, RIA Novosti and Vils Ltd. have liaison offices in various cities14. The Turkish government plan to increase the collaboration between both countries and encourage major Russian companies to further invest in Turkey. 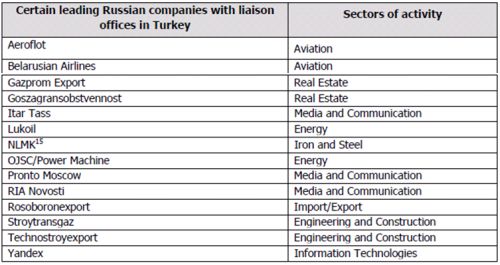 Prominent projects such as Samsun-Ceyhan pipeline, Güney Akım, Mavi Akım, MMK Atakaş's investment of USD two billion, the acquisition of Akpet by Lukoil for USD 500 million, other real estate purchases, tourism opportunities and Turkey's commercial and economic interests in the Russian Federation indicate that the relations between both countries will continue to excel.

5 Turkish Confederation of Businessmen and Industrialists.

12 The Republic of Turkey Prime Ministry Investment Support and Promotion Agency, Invest in Turkey, News, 28 May 2013

14 Republic of Turkey Ministry of Economy, Foreign Direct Investments, List of Liaison Offices and Foreign Companies in Turkey as of the end of December 2013