Turkey: Pricing Of Pharmaceuticals And The Fixed Exchange Rate

by Gün + Partners
Gun + Partners
Your LinkedIn Connections
with the authors
To print this article, all you need is to be registered or login on Mondaq.com.

Pharmaceutical prices in Turkey have always been one of the most controversial issues. The prices of medicines that are to be marketed are set in accordance with the Decision on Pricing of Human Medicinal Products ("Decision") and the Communiqué on the Pricing of Human Medicinal Products ("Communiqué") of 29 September 2017, issued by the Ministry of Health ("MoH"), which is vested with the competencies to regulate this area.

The Decision provides for a reference pricing system, whereby the least expensive ex-factory price in one of the listed EU countries, for the relevant product, is taken as the ex-factory price, in Turkey. The currency is then converted into Turkish liras, however, this transaction this is done at a fixed value every year so that it is not affected by fluctuations in the exchange rates. Thus, the exchange rate applied to the reference price taken from the respective EU country is fixed for one year, and the price reached is considerably lower than the current exchange rate.

With the entry into force of the Decision of 2017, the rate was determined as 70% of the average Euro value of the previous year. Accordingly, the Price Evaluation Commission is to gather within the first 45 days of each year, and is expected to announce the 1 (one) Euro value, based on the 70% calculation of the average value of the previous year.

Just prior to the announcement of the Euro rate applicable for the year 2018, on 22 January 2018, a provisional clause was added to the Decision regulating that the value of Euro would not exceed more than 15% of the value set for the previous year.

As a result of the referendum held on 16 April 2017, an amendment was made to the Constitution, and a transition was made to the Presidential Government System in Turkey. The most fundamental feature of this system is the transfer of all executive authorities to the President with the annulment of the Office of Prime Ministry. Therefore, the rules and procedures for determination of pharmaceutical prices were determined by the Cabinet of Ministers and, as of July, 2018, they are now determined by the President.

Right before the announcement of the rate applicable for 2019, with a Presidential Decree, which was published in the Official Gazette on 14 February 2019, the rate of "70%" provided in the Decision was amended to "60%" at that time.

On 19 February 2021, by adding a provisional article to the Decision dated 2017, it was regulated that the fixed Euro value for 2021 would not exceed 20% of the 1 (one) Euro value applied in the previous period. In this context, it is expected that the Euro value to be determined in accordance with this rule will be published for 2021. 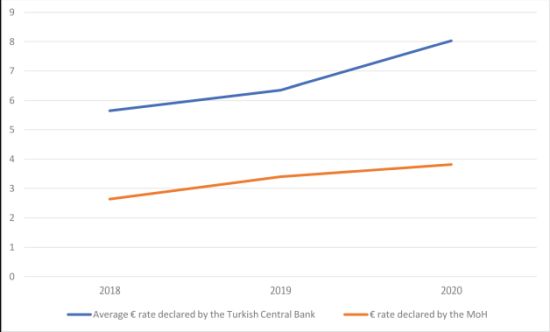 At the time of the preparation of this document, the fixed value of the Euro for 2021 has not yet been determined.