Turkey: Last 3 Years For Turkish Competition Authority: What Does The Data Say?

Agency effectiveness is of critical importance for antitrust enforcement to reach its main goals, the well-functioning market economy and the welfare of consumers arising from a competitive environment. After all, if it were not for the effective agency implementation, the rules that are protecting the competition are meek as lambs. Impartial and effective antitrust enforcement brings fair and reasonable ground that the players may carry out their operations with clarity before the law. For that matter, the predictability and continuity of antitrust enforcement is vital for the welfare of consumers and smooth functioning of economic system. At the same time, antitrust enforcement is expected to keep up with the developments in the dynamic markets that it oversees. Hence, while being unpredictable poses the risk of scaring free market players, worn out precedents also disconnects the governors of the law from the governed.

The paper examining the antitrust agency effectiveness in Netherlands by Annalies Outhuijse from University of Groningen raised the examination idea of this article1. In its paper, Outhuijse found that the appeal rate for decisions of the national competition authority (The Authority for Consumers and Markets – ACM) is significantly high, as well as the rate of annulment of such decisions. The paper then discussed the effectiveness of the ACM, as well as the fittingness of the annulment decisions of courts. For that purposes, we have analysed the track-record of the Turkish Competition Authority (TCA) from its published decisions concerning competition violations. In this analysis, we left out the decisions concerning misleading statement allegations, re-examination pleas, interim measures, requests to examine case files, with focusing on preliminary investigations and full-fledged investigations in the past 3 years concerning the allegations on competition violations (violations of Articles 4 and 6 of the Turkish Competition Act). It shall be noted that each case has its own merits and the data derived from the TCA's decisions are just to be assessed from general standpoint. 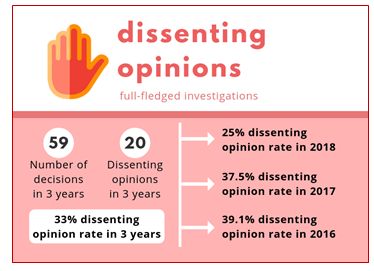 It is also observable that the dissenting opinion rate is getting lower for a period following an appointment of a new member to the Competition Board. Such outcome is reasonable, since in most cases a new member is adhere to the general dictum and becomes accustomed to the TCA's precedents rather than challenging the status quo with writing dissenting opinions.

One may argue that the TCA is becoming more and more consistent with its precedents, and for that reason, the dissenting opinions are appearing less and less. However, such argument can be strongly challenged from two separate standpoint. First, we do not see a particular uniformity between the decisions of the TCA with regards to interpretations of the law. For example, in some cases the TCA found the conduct focused on resale price maintenance as strictly prohibited even if there was no success in maintaining the resale prices in the market while in other cases the TCA looked for success in such conduct for finding a violation. Hence, the argument that the TCA's precedents are becoming solid is not well grounded. On the other hand, competition law is perhaps the most dynamic field of law there is, since it is expected to adapt itself to constant changes in the markets. The very essence of overseeing markets requires so. Therefore, precedents may (and perhaps shall) change over time, and such fact is giving rise to the expectations of seeing dissenting opinions in the decisions of the TCA.

The Competition Act enables the challenging the decisions of the TCA before administrative courts. The parties to the investigations can follow that judicial procedure for the annulment of the TCA's decisions. The parties' willingness to appeal the decisions before the courts may also give some clues on the market players' trust in the effectiveness of the antitrust enforcement and the TCA's evaluations.

For the past 3 years, the rate of appealed decisions of the TCA is 40% for full-fledged investigations. This rate was 52.1% in 2016, and 56.2% in 2017. The appeal rate dropped significantly in 2018 to 15%, but such decrease may depend on the continuing appeal procedures, which are not reflected to the TCA yet.

It shall be noted that the data used for these evaluations are compiled from TCA sources, which are publicly available as of publishing of this article.

1. Annalies Outhuijse, The Effective Public Enforcement of the Prohibition of Anti-Competitive Agreements: Why Do Undertakings in the Netherlands Appeal?, University of Groningen Faculty of Law Research Paper Series No. 17/2018, May 2018.