The competition law in Turkey is modeled after the European Union ("EU") competition law and the provisions that concern substantial issues, including merger control, are almost the same in both jurisdictions. Due to the sameness of the underlying rules that govern merger control and the richness of the accumulated experience on the part of the EU institutions such as the European Commission ("Commission") and the Court of Justice of the EU ("CJEU"), the Turkish Competition Authority ("TCA") values the guidance of these institutions and generally chooses to stick with their interpretations. However, there may always be some exceptions, such as the one discussed in this article. Namely, the assessment of transactions leading to the formation of (non-greenfield) non-full function joint ventures ("JVs").

In the EU and Turkey, a concentration is deemed to arise when a merger or an acquisition transaction leads to a lasting change in the control structure of an undertaking. Moreover, under both jurisdictions, the relevant legislation holds that the creation of a JV performing on a lasting basis all the functions of an autonomous economic entity (i.e., a full-function JV) shall be deemed as an acquisition transaction that constitutes a concentration ("the JV Full Functionality Principle").

If a transaction is characterized as a concentration and certain pre-conditions are satisfied (e.g., relevant turnover thresholds are exceeded), its validity depends on the ex-ante approval of the competition authorities. Even if the relevant transaction does not constitute concentration, it may still fall within the scope provisions that govern anti-competitive agreements or abuse of dominant position. Thus, it is of crucial significance to determine whether a transaction constitutes a concentration or not from a competition law perspective.

Normally, it is relatively straightforward to determine whether a given transaction leads to a lasting change in the control structure of an undertaking. Yet, the JV Full Functionality Principle confused the EU Member States, and the issue was finally brought before the CJEU via a preliminary ruling request in Austria Asphalt1.

Austria Asphalt was concerned with forming a JV between Austria Asphalt and Teerag Asdag to acquire the target asphalt plant, which was previously under the sole control of Teerag Asdag. It was also undisputed that the target would not be full-function post-transaction as it would not perform the functions of an autonomous economic entity. Hence, the transaction concerned a transition over the target's control structure from sole control to joint control, resulting in the target becoming a non-full function JV.

Until Austria Asphalt, the Commission thought that the foregoing constituted an acquisition transaction whereby a new undertaking acquired joint control over an "existing" economic unit (e.g., a legal entity, an asset, etc.). It was believed that the transaction led to a lasting change in the control structure of that "existing" economic unit, regardless of whether that unit would be full-function post-transaction or not. On the same line, the Commission assumed that the JV Full Functionality Principle governed the formation of greenfield JVs, created from scratch by their parents without contributing any existing business, assets, and so forth. In other words, the interpretation that prevailed before Austria Asphalt assumed that only greenfield JVs had to fulfill the criteria of full functionality to be deemed as concentrations within the meaning of the relevant EU legislation (namely, the EU Merger Regulation ["EUMR"]), while an undertaking's acquisition of joint control over an existing economic unit always constituted a concentration regardless of full functionality.

However, the Commission's interpretation raised some questions, especially when read together with paragraph 91 of the Consolidated Jurisdictional Notice ("CJN"), which foresaw an exception regarding the JV Full Functionality Principle only for specific forms of acquisition of joint control. According to paragraph 91 of the CJN, "the new acquisition of another undertaking by several jointly controlling undertakings, therefore, constitutes a concentration under the EUMR" as it would lead to a structural change in the market even if the JV would not be full-function post-transaction. The relevant paragraph adds that "a transaction involving several undertakings acquiring joint control of another undertaking or parts of another undertaking (..) from third parties will constitute a concentration" without assessing full functionality. The emphasis on the acquisition of an existing entity from "third parties" suggests that the exception in paragraph 91 of the CJN applies exclusively to cases where the former owner of the existing entity does not retain joint control over the said entity post-merger (thereby becoming the third party). In other words, the CJN differentiates between acquisitions of joint control over an existing entity (i) where the previous owner continues to exert control and (ii) where it ceases to do so (and new undertakings acquire joint control). 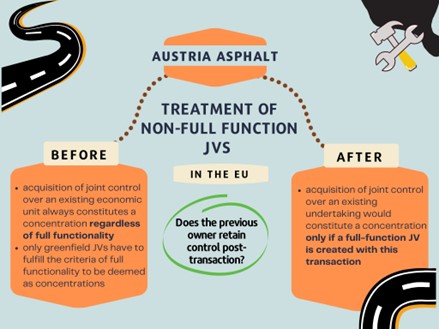 Per paragraph 91, transactions falling under the second group are deemed as concentrations regardless of post-transaction full functionality of the JV to be formed. While the relevant paragraph is silent about the former scenario, it seems to imply that the JV Full Functionality Principle should be applied in those cases. On the other hand, the Commission did not consider this distinction relevant in practice and disregarded the JV Full Functionality Principle in both cases.

In Austria Asphalt, the CJEU stipulated that the Commission's interpretation was inconsistent with the EUMR and held that a change in the form of control of an existing undertaking from sole to a joint would be deemed as a concentration only if a full-function JV is created with this transaction. The CJEU did not discuss whether this interpretation would also invalidate the exception laid down in paragraph 91 of the CJN. However, until further clarification is made, it may be assumed that the relevant exception is still valid.

Thus, in the EU competition law, the applicability of the JV Full Functionality Principle to transactions, as a result of which sole control over an existing entity changes into joint control, depends on whether the previous owner retains control post-transaction.

The TCA Begs to Differ

Interestingly, although the underlying legislation was the same (the JV Full Functionality Principle is laid down in Article 5/3 of the Merger Regulation in Turkey, and paragraph 78 of the TCA's Control Guidelines is a verbatim translation of paragraph 91 of the CJN), this issue had long been an uncharted territory in the Turkish competition law. Indeed, there were no precedents where the JV Full Functionality Principle's applicability to transactions related to the formation of non-greenfield and non-full function JVs was discussed. Hence, one could expect the TCA to adopt the CJEU's interpretation in Austria Asphalt.

However, the TCA adopted a different interpretation in Juki2. The context of Juki was the same as Austria Asphalt. The relevant transaction concerned the acquisition of joint control by Juki Corporation over certain businesses of Mitsubishi Electric, which were under its sole control pre-transaction. Post-transaction, the relevant businesses would be under the joint control of Juki Corporation and Mitsubishi Electric. Moreover, the relevant JV would not fully function after the transaction.

Under the CJEU's interpretation in Austria Asphalt, this transaction may not be deemed as a concentration and would not be notifiable. However, the TCA adopted a different interpretation and held that "the relevant transaction constitutes a concentration as it concerns the transfer of a part of an undertaking, to which a market turnover may be attributed." The TCA further pointed out that the transaction was notifiable as other pre-conditions for notifiability were also satisfied.

Juki shows that the TCA adopts the Commission's interpretation before Austria Asphalt and implicitly assumes that the JV Full Functionality Principle is only relevant for forming greenfield joint ventures. On the other hand, the acquisition of joint control over existing entities (to which a market turnover is attributable) is deemed as concentrations regardless of whether the JV to be formed post transaction would be full function.

Due to the absence of precedents regarding the treatment of non-greenfield and non-full function JVs under the Turkish merger control regime before Juki, it may well be the case that certain transactions that should have been notifiable in Turkey according to the principle laid down in Juki were not notified under the assumption that the TCA would stick to the CJEU's interpretation in Austria Asphalt. 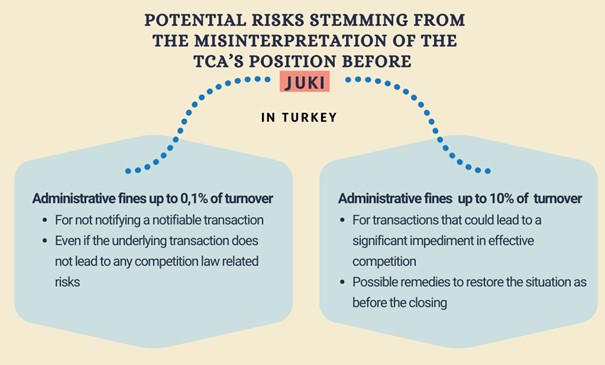 This may have serious implications for transactions that were closed before obtaining the TCA's ex-ante approval as the parties may be imposed administrative fines amounting to 0,1% of their turnovers for not notifying a notifiable transaction even if the underlying transaction does not lead to any competition law related risks. The consequences would be much more severe for transactions that could significantly impede effective competition. The TCA may initiate an investigation, due to which the parties may face a fine of up to 10% of their turnovers. It may also impose remedies to restore the situation before the closing (i.e., restitutio in integrum).

It is yet to be seen whether Juki would only affect the future application of Turkish merger control rules or it would also have very controversial retroactive effects.